FiredUp: Livestock losses come to one of the last independent links in our food supply

Sometimes this summer, our cow herd was grazing close enough that I could not only see them out our bedroom window, I could hear them eating. The sound of them ripping the grass from the ground, bite by bite, was pretty noisy from 30 feet away.

My husband and I (mostly my husband, but I provide occasional chasing and bottle-calf-feeding support) are stepping into the cattle business slowly. Last summer we had two bottle calves, and this year Dave bought four cows and their calves. In the scale of modern agriculture, a herd of 10 is on the minute end of things, but it’s a nice beginning. Our modest goal is to benefit from the skill of the cow: turning grass into food we can eat.

We also have pigs and chickens, animals with the skill of turning garbage and weeds into food (and fertilizer, also an important contribution).

We’re on the small end of all these endeavors. But if you look at how we raise cattle, we are not doing much differently from the dominant players in the industry: For the most part, cows give birth in cow-calf operations that are family farms. The scale is at least somewhat limited by the land available. Cows won’t produce calves on an all-grain diet, and it’s cheaper to bring cows to the grass than to bring the grass to the cows. And because that land is still controlled by many different landowners, beef is not an easy industry for big ag corporations to vertically integrate—in other words, to own from birth to dinner plate.

Not so for hogs or chickens. Unless you go out of your way to buy direct from a local producer, your ham, chicken and eggs likely come from part of a corporate structure. Some hog and chicken farmers may call themselves “independent producers,” but the contracts they have with the big corporations make them more like sharecroppers than the independent farmers of two generations ago that many of our grandparents were.

We can all be thankful that beef is different, as it means more families in our rural communities. Farmers and ranchers raising the nation’s beef are still independent, not forced to compete with the brutal efficiencies that vertical integration can bring. They are living by that cowboy ethic: making their own decisions about the genetics of their herds, buying and selling when they like, and in control of their own destinies.

Except, of course, when they are not. No one controls the weather.

The S.D. Civil Air Patrol released photos of the livestock devastation they are seeing from the air. The photos are heartbreaking. 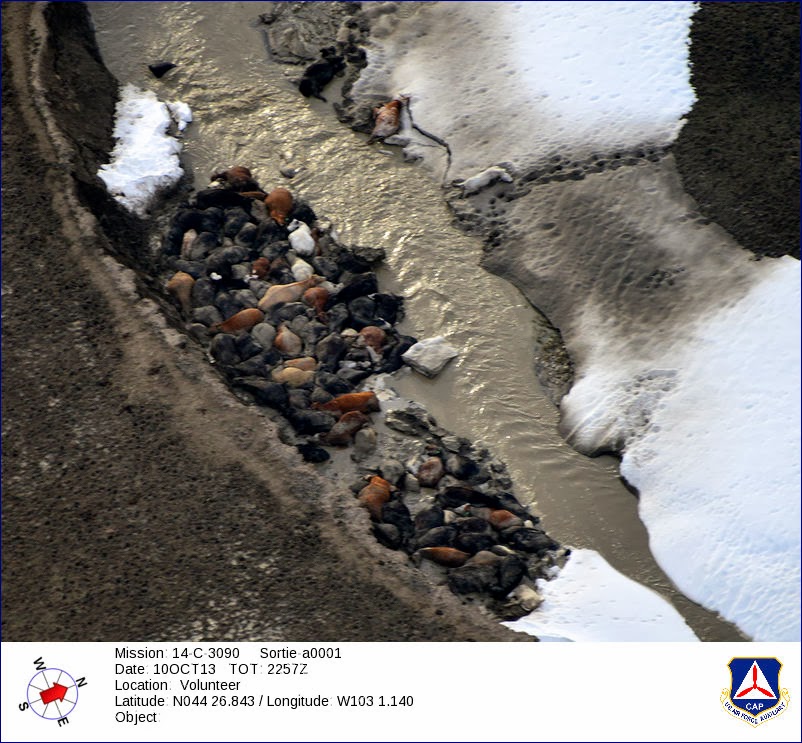 A recent estimate from the S.D. Stock Grower’s Association is that as much as 20 percent of the state’s cattle were lost in the storm.

Several good writers have explained in recent days why the Oct. 1 storm in western South Dakota was so devastating: The cattle had not yet put on their winter coats, and they were still out on more distant and exposed summer pasture. They also suffered a drenching rain before the snow came.

The speed of reproduction also makes loss of cattle more severe than loss of pigs or chickens. One sow can have two or even three litters a year, of a dozen or more piglets in a litter. Our chickens lay an egg a day when they are in top form. Increasing the size of a pig herd or chicken flock doesn’t take all that long.

Cows can only have one calf a year. Lose a calf this year, and you have to wait a whole other year to try again. If you still have the cow—and many West River ranchers do not.

The provision in the farm bill that would have helped these ranchers expired two years ago and hasn’t been renewed. Farm Service Agency and Natural Resources Conservation Service staff that could have offered some support in this kind of disaster are on furlough. For the most part, these ranchers are now helping one another instead of getting help from anywhere else.

Maybe in other circumstances, they’d be OK with that. But my guess is that the loss of so much of their livelihood has hit them like a punch in the gut. The loss of money is bad enough. Not having an answer to the question “Where do we go from here?” is worse. That’s where the government officials could provide some comfort and direction—if they were on the job.

I’ll give you the link to the donation effort (visit www.giveblackhills.org and search “Rancher Relief Fund”), but I am angry that this is the best our state and nation can do. This is exactly the kind of farming and ranching that keeps our rural places vibrant. The fact that there’s no official monetary help from either the state or the federal government  for these ranchers in this dire need is a national embarrassment.