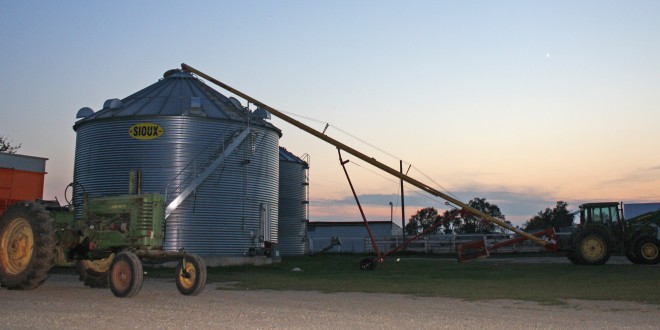 A brand-new grain bin on the Paul Fergen farm in southeastern Davison (S.D.) County has helped ease the pressure of harvest for Fergen and family members. Because the new bin contains a dryer, Fergen is able to harvest earlier in the season, while his brother's corn must dry out before it can be harvested. This year has been dubbed "the grain bin year" by some farmers and contractors in the Dakotafire region, as more and more bins are being erected, so farmers can store their grains due to a combination of low market prices and shipping issues related to the transportation of crude oil from North Dakota. Photo by Wendy Royston/Dakotafire Media

“This has been the grain bin year.”

Frankie Rollins, who has built grain bins for the past six years with Hart Steel, said the company has been busier than normal in 2014, and that more and more bidding competition is emerging in southeastern South Dakota.

“I hear of a lot of new crews starting up, so it sounds to me like this year has been the grain bin year,” he said.

Hart Steel works with dealers in Ethan, S.D., and Redfield, S.D., but with more competition for jobs around Ethan, in the southern part of the state, the company has been busier to the north.

“As far as I’m concerned, this is one of the better seasons, because last year wasn’t horrible, but it wasn’t as good as in the past, when farmers were paying us (extra) money to get it up faster, because they just needed it,” Rollins said.

A few areas in the Dakotas are seeing increased grain bin construction this year, likely an effect of several factors converging at once: Crowded rail lines, anticipated bumper crops and low grain prices that make farmers less than eager to sell right after harvest.

Permits issued to build grain bins in the Dakotafire region vary significantly, with the most—28—issued in Brown (S.D.) County so far for the year, and the least—one—issued in Faulk (S.D.) County. In Brown County, which boasts a population of more than 37,000 as of 2012, compared to Faulk County’s 2,300 in the same year, 10 fewer grain bin building permits have been issued so far in 2014, compared to all of 2013. 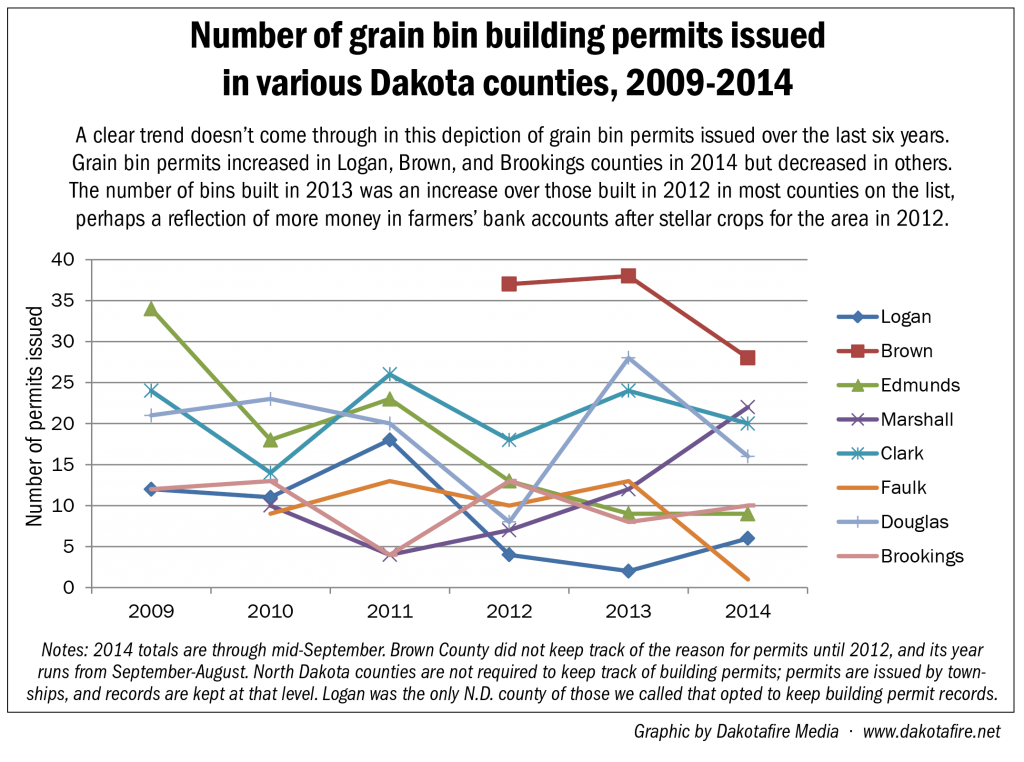 Russell Buisker, a Marshall County farmer north of Britton, S.D., is among many farmers who say North Dakota’s oil boom has affected their ability to ship grains.

“The rail thing is a big part of it,” he said. “They are slow in getting unit grains again, and so far behind. You just don’t know if you will be able to get rid of the grain or not. There’s a good crop sitting out there … and the way elevators are sitting there won’t be enough room there.”

Justin Ostby, manager of Wheaton-Dumont Elevator in Britton, said there could be some merit to the concern Buisker—who this year built a 33,000-bushel bin himself—shared.

“We haven’t had any problem getting rid of grain from last year, but my guess is that it’s going to be pretty tough this fall,” Ostby said, adding that all of 2013’s crop has been shipped from the elevator in Britton. “If we run out of room here, we may have to pile some corn or beans, but we also built a bunker in Graceville, Minn., that will hold a million bushels of corn. The only problem will be getting it there, which we would have to do by truck.”

“During the last 12 months … all the crude oil that’s been moving out there in the Midwest (has) put more of a strain and burden on rail cars and engines,” Bialas said. “That did jam things up here in the Midwest for much of the year, but we … shipped a fair amount of bushels out of here from January all the way through September. Going into harvest … we are actually in pretty good shape. We’re about cleaned out.”

Because of the location of Dakota Plains, Bialas said some grains can be trucked directly from there to nearby end users.

“That has also helped us to be cleaned out and ready for the new crop bushels that are soon to come,” he said.

The latest U.S. Department of Agriculture projects record crops for both corn and soybeans this year. Corn production is expected to be 14.4 billion bushels, with an average of 171.7 bushels per acre. “If realized, this will be the highest yield and production on record for the United States,” according to the USDA’s Sept. 11 crop production report. Soybean production (3.91 billion bushels) and yields (46.6 bushels per acre) are also expected to be at record levels.

The real problem with rail-shipping, Bialas said, isn’t the ability to get the cars to move the grain, but rather the ability to pay to utilize them.

“The cars will be there,” he said. “Last year, they hit as high as $6,500 in March and again this fall for cars next week (or the) next two weeks, they are about in that same range. … There have been highs and lows in between, but those are some very, very high levels not even close to storage (costs). … When you do get a train ordered, most of the time, it will come to you. It might be a few days late, but it will get to you.”

And, on the flip side, farmers are getting lower prices for the corn itself. Grains coming in so far this harvest have been yielding high—even in hail-damaged areas—he said, but the prices have been low.

“We have really lost a lot on the prices in the last three months, so they are not really thrilled with the prices, especially compared with how high the prices were … for the past five years,” Bialas said.

“I think they built a lot more when corn was at $5 or $6 or $7,” he said. “I think they were really storing it then—or trying to—but now that prices are down, maybe there isn’t a benefit to storing it.”

On the other hand, farmers may be more optimistic about future prices.

“The key factor is price,” said Sandy Bauer of the Farm Service Agency in Faulk County, S.D. “Farmers are anticipating if they could hold (their crops), the prices could come up.”

She added that some wheat farmers were getting docked considerably for vomitoxin, and they may choose to store grain in hopes that the vomitoxin would disperse over the storage period, or that it would not be docked as significantly later in the year when more grain is needed.

Farmers increasing their own storage

Buisker is not the only farmer who is building. Where he lives—in Marshall County, which is in the northeastern part of South Dakota—building permits for grain bins have increased 83 percent—from 12 to 22—since last year.

“Within six miles of me, there are over a dozen new bins going up,” Buisker said. “It’s the biggest bin-building boom in a long time.”

And those bins, he said, are larger than ever.

Although Bialas said Dakota Plains is prepared to utilize ground pile storage if yields are higher than anticipated, there’s still time to build new bins, according to Rollins.

“We put up as much as we can,” he said. “It’s a seasonal job; we start as soon as concrete is ready, and … usually our last bin is pushing into the snow. We try to push our season as far as we can, but it’s always weather-permitting.”