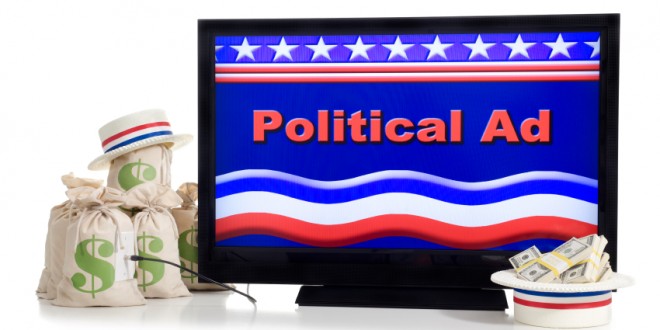 FiredUp: No one is actually throwing granny off a cliff, even if political ads say so

My family does not have a television connected to broadcast channels, in part because after the transition to digital television in 2009 all we can get way out in rural Brown County are several different flavors of public television. (No offense meant for public television—my kids make their way to their grandmother’s house for a dose of PBS Kids on a regular basis.) But even if we did get better reception, we have chosen to stay disconnected from it so we can avoid all the advertising that comes with the content we want to watch.

Especially in the political season, that stuff is toxic. With the crazy amounts of money flowing into political campaigns this year as a result of the Citizens United Supreme Court decision—money that can flow from unnamed donors and to vaguely named organizations that can say pretty much whatever they want to say with no accountability to the truth—you can expect the advertising to be even more nauseating that usual. The focus is on results: What message will cause the most visceral reaction? That’s the message these guys will go with. Truth is a secondary concern.

Is there anything you can do, short of tuning out altogether? You’ll probably want to tune it at least for the Olympics this summer, so you may want try a different tactic or two.

Be suspicious. The Associated Press has a good article today (“SPIN METER: Political ads stir health care horror”) about the over-dramatizations and distortions in political ads about health care. These ads work because people don’t really know that much about the issue, and from their own personal experiences, health care often evokes an emotional response. Moreover, people will often agree with a claim, no matter how implausible, if it reinforces beliefs they already have. “Many people believe crazy things about health care because they want to believe them,” said Drew Altman, president of the nonpartisan Kaiser Family Foundation, as quoted in the Associated Press article.

The lesson here: Distrust anything you see in a political ad or a viral e-mail, and distrust it more if you really want to believe it—our own personal biases can take down our internal fact-checkers.

Educate yourself. If you want to check a fact you see or hear in an e-mail, a variety of websites are doing that digging now:

With a quick online search, you will likely find that the shocking allegation you just heard or read is either completely untrue or at least only part of the story.

If you question whether these fact-checking sites are on the level (note the George Soros-Snopes rumor mentioned above), don’t stop at what those sites have to say. If the sites are any good, they will provide links to other sources. Follow those sources, and consider what those sources have to gain or lose from what they are saying.

This requires the kind of critical thinking that some leaders lament that the public doesn’t have anymore; prove them wrong by using it.

Speak up. Flackcheck.org, an organization of the Annenburg Public Policy Center, has put together a campaign called Stand By Your Ad, in which viewers can contact their local television stations and remind them that they are under no legal obligation to run ads that they know to be untrue. Hear a report from National Public Radio’s On the Media about the campaign here.

Have other ideas about dealing with political ads? Comment below!