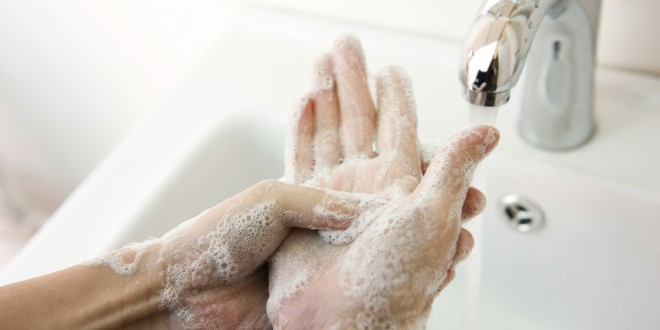 Ebola fears? Just wash your hands and move on

Should Dakotans be worried about Ebola spreading here? Probably not.

Even though the 2014 Ebola outbreak is the largest ever and marks the first time the virus has been diagnosed in the United States, officials say the risk to the vast majority of Americans is tiny. Stay calm, they advise—just practice proper hygiene and use common-sense illness management techniques.

America’s first case was confirmed Sept. 28, after a man traveled from Liberia—the nation that has been hardest hit by the outbreak—to Texas after withholding information regarding the state of his health. He died Oct. 8. The following week, two of his caregivers at the hospital were diagnosed with the disease. Nurses Nina Pham and Amber Joy Vinson both were successfully treated for the disease and released from the hospital within two weeks of their diagnoses.

Preventative measures for avoiding the spread of Ebola, according to experts, should be simple to accomplish, because they are familiar to Americans—practice proper handwashing (at least 20 seconds of scrubbing, with soap) and avoid others while ill, just like with any other illness. Because Ebola is spread only through contact with the bodily fluids of an infected person after they start showing symptoms, these tactics significantly reduce the risk of contracting it.

“It’s not spread through the air, the food or the water,” Michelle Feist, an epidemiologist with the North Dakota Department of Health, said, adding that the one “good” thing about the virus is that it is only contagious once an individual shows signs of illness. “With (some illnesses, such as) influenza, you spread it when you have signs and symptoms, but some people can spread it a day or two before you have signs or symptoms. … It is fortunate that (Ebola) is only spread once the individual shows signs and symptoms, because it is a very serious disease.”

As another layer of protection, the U.S. Centers for Disease Control and Prevention has advised that all medical facilities across the Dakotas ask patients whether they have traveled to the main three African countries affected by Ebola so far—or been in contact with someone who has—as a front-line attack against the virus’s spread.

“It’s important that people just answer the questions and be honest,” Kightlinger said.

The CDC has developed a four-tier rating for Americans’ potential for developing Ebola, and is monitoring patients and potential patients accordingly. The vast majority Americans are considered to be of “no identifiable risk,” meaning they have either not had contact with someone actively ill with Ebola, or that type of contact occurred more than 21 days ago, which is the incubation period for the virus. The second level, “low (but not zero) risk,” indicates someone has had “brief” contact, such as passing someone in a hallway, who has active Ebola; has treated an Ebola patient while using proper personal protective equipment; has traveled to one of the three main Ebola-stricken nations within the past 21 days; or has traveled in the same aircraft as a symptomatic Ebola patient. The third level, “some risk,” has not been identified among anyone in North or South Dakota as of Nov. 5. That level is for individuals who have worked with Ebola patients in the three main countries while using protective gear or who have been within three feet of a symptomatic patient while not wearing protection. The most serious classification, “high risk,” applies to those individuals who have come into contact with bodily fluids of an Ebola patient or the body of a deceased patient without appropriate gear, or those who have lived in the same home as a patient showing symptoms.

So far, North Dakota has identified three individuals in the “low (but not zero) risk” category, with one still under observation as of Nov. 5, according to Feist. Kightlinger declined to divulge S.D. numbers, but said his state had seen at least one person fall into that category as of the same date. At that level, individuals are not isolated, but instead self-monitor for symptoms and report their temperatures twice daily. The states’ Departments of Health also visit those people routinely during the 21-day observation period, to ensure their continued health. At the end of the 21-day period, they are moved back to the “no identifiable risk” category, under which most Dakotans fall.

Neither state so far had observed anyone of a higher risk level.

The protocol “has worked very well for us,” Kightlinger said. “We’ve had excellent cooperation.”

The Minnesota Department of Health issued a press release late last week that indicated its observation numbers were much higher than the Dakotas’, but Kightlinger said the level of observation in the neighboring state is no cause for alarm here, nor there.

“Minnesota is a lot larger state than we are, and they have a fairly large Liberian population in the Twin Cities,” he said of the state’s 60 residents who had been identified as higher than “no identifiable risk” as of Nov. 5. “Every day, there’s anywhere from 80 to 100 people coming into the United States from those countries. … Most of those people end up in the big six states (New York, Pennsylvania, Maryland, Virginia, New Jersey and Georgia). … It’s rare for people to come out here, to little old South Dakota. … It’s a very low (possibility), yet we want to be prepared, so we are taking this seriously and putting in place preparations, educating the healthcare workforce, the public health workers, and the general public.”

“Hospitals and the North Dakota Department of Health have had numerous conversations, and we’re preparing and working with the health care community, school systems and businesses,” Feist said. “We’ve been providing information that the (Centers for Disease Control and Prevention) has put out to the health care community about the current situation … so that it can be handled appropriately.”

As of Nov. 5, the lab-confirmed cases of Ebola in the U.S. accounted for eight of the nearly 8,000 cases worldwide. Another 5,000 people were suspected to have contracted the virus in other countries, and just over 4,800 people have died from the disease, according to the CDC. Of the eight Ebola patients who have received treatment in the United States, four were diagnosed while on U.S. soil, and the other four were transported to the U.S. after their diagnosis.

“Whether that number (of people infected) is going to increase or not, we don’t know, but it is serious and has a very high death rate, so we want hospitals … to be prepared for if we would get one in the state,” she said.

How serious is it?

So, is Ebola “scarier” than other viruses?

“In regard to seriousness, yes,” Feist said. “In regard to people who would be in … Dakota communities, no. People are probably more likely to come into contact with someone who has the flu, but as far as seriousness, Ebola definitely wins that battle.”

The early symptoms of Ebola are “non-specific,” she said, and mimic the stomach flu—fever, diarrhea, vomiting, muscle weakness and lack of appetite.

Individuals who may be infected with Ebola are asked to see medical attention as quickly as possible, according to Feist, and call ahead before entering a medical facility if possible, so preparations can be made to limit the virus’s spread.

“If circumstances prevent that, they need to immediately let health care workers know that they … may have been exposed to Ebola (once they arrive) … to limit exposure,” Feist said.