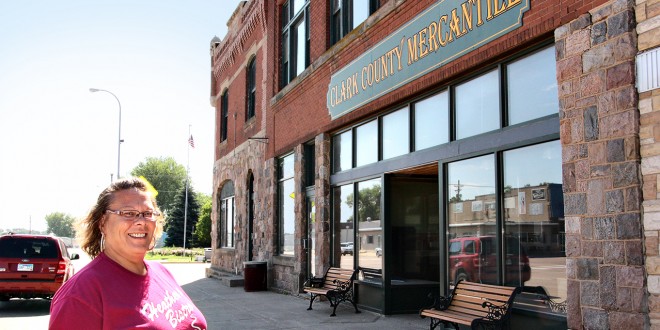 Heather Johannsen remodeled the interior of a building on Main Street in Clark, S.D., into Heather’s Bistro. Photo by Bill Krikac/Clark County Courier

Character building: Renovations can yield financial and other benefits for communities 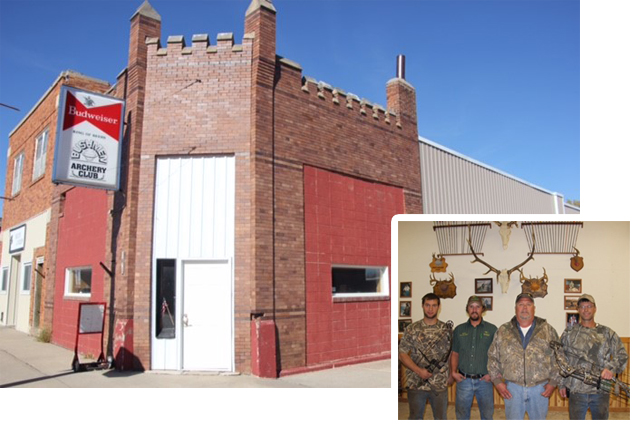 Fifteen years ago, the Bushmen Archery Club purchased the Pete’s Rec building on Main Street in Corsica, S.D., with the dream to convert the building back into a sort of “men’s” hangout.

“That was the hub for the men,” said Mick Schrank, one of the men behind saving the building, fondly remembering time spent shooting pool at Pete’s Rec on Saturday evenings some 50 years ago.

The group was attracted to the building’s high ceilings and long, narrow design—perfect for archery practice—but it required complete renovation in order to be usable again. The building itself is sound, despite a few bricks working loose on the building’s exterior, according to Schrank. The largest project was replacing the building’s leaking, foot-thick tar-and-rock roof from the 1930s with steel and spray foam. With the help of state and federal grants, a $10,000 new roof was put on it.

A year after it was purchased, all of the necessary electrical, plumbing and structural work was completed.

“It was a lot of work, but well worth it,” Schrank said, adding that the archery group included carpenters, electricians, plumbers and welders. “Everyone pitched in—we just had the right group of guys at the right time to make it all work.”

Some might dismiss efforts to renovate such buildings as having only “sentimental value,” but there may be more reward than that. Investing in old buildings has the potential to help define communities, reduce waste—and even provide a monetary return.

Creating a sense of place

Brad Ciavarella of Ciavarella Design in Mitchell, S.D., has been involved in resurrecting old buildings as an architect and businessman. A few years ago, his business purchased Mitchell’s 1935 Whittier School building, which had been condemned due to asbestos and other concerns. Seeking a new home for the business, the company renovated the three-story structure into office space and loft-style apartments.

“We actually approached the owner years before it was on the market, and encouraged them to do something with the building, because we were concerned that it was going to … end up being torn down eventually,” he said.

Ciavarella said a bit of wisdom shared by one of his college professors has stuck with him ever since: “We shape our buildings, and forever after, they shape us.” That concept has directed his career and his business.

“If you go up by Forestburg (S.D.), there’s a melon stand in front of the school up there. The melon stand looks better than the school, and that’s sad,” he said. “They really put a lot of effort into this school that we’re in. There’s a lot of detail. They could have built it out of wood, but they wanted character, and they wanted something that showed how they felt about education.”

That concept of building with character is part of a planning strategy known as “placemaking.”

According to the Project for Public Spaces, a nonprofit community planning and design organization, “placemaking strengthens the connection between people and the places they share. … (It) involves the planning, design, management and programming of public spaces. … Placemaking facilitates creative patterns of activities and connections … that define a place and support its ongoing evolution. Placemaking is how people are more collectively and intentionally shaping our world, and our future on this planet.”

Ciavarella said that is just what has happened in Rapid City (S.D.), where the outdoor Roosevelt Ice Arena built in the heart of the city has completely altered the way in which that district of town operates.

“(Investors) have to look at more than just the pure dollars, because when you have a grand, old building in your town go down, … it really leaves a big hole,” said Lorna Meidinger, Architectural Historian and National Register Historian for the State Historical Society of North Dakota.

‘Green’ building can save money

Many building efforts today are also aiming to be “green,” or wise in how resources are used, recognizing how those decisions affect the world around us.

Rehabilitation is, in and of itself, a ‘green’ activity, according to Meidinger of the N.D. State Historical Society.

“There are people how are very interested in the environmental aspects of not destroying the older structures and filling up our landfills, and then tearing down our trees and all of the materials that go into building something new,” she said.

That construction and demolition waste piles up—according to some estimates, it accounts for a quarter of the debris filling landfills across the nation.

“The most green effort is reusing an existing structure,” said Ciavarella. “There’s nothing more green than that in construction, because the embodied energy in a built structure is enormous. … Embodied energy is the amount of energy that goes into creating what’s there. It’s an enormous amount, and it takes a huge amount to take down one of these buildings.”

The bonus for thinking green is that it can also be a good financial choice.

Many people enter the process of deciding what to do with old buildings pessimistically, but Meidinger said that usually is not necessary. Citing a presentation by Doug Burgum of the Kilbourne Group, a group focused on revitalizing downtown Fargo, at the North Dakota Downtown Conference in Bismarck Oct. 15-16, Meidinger said potential investors should consider projects optimistically.

“(Burgum) flat out said that for every project he has done for restoring buildings, it is cheaper to convert the old building if it’s strong construction, than it would be for him to build new,” said Meidinger.

Often, Burgum told the crowd, project architects compare apples to oranges when they present project estimates for new construction compared to renovation. “A lot of times (renovation projections) will include a whole bunch of things that are not about restoring the building (such as technology and furnishings),” Meidinger said.

Once they get past the initial sticker shock and break down the cost and consider ways to prioritize the way they re-utilize the original structure, developers often are pleasantly surprised, she said.

For example: “If you pair a storm window with an old window, and it is more energy efficient” than many newer windows, said Meidinger, adding that repair of broken window panes, too, is inexpensive, and often a better long-term choice than replacing an entire window.

Ciavarella Design’s renovation of the Whittier building in Mitchell is an example of how old materials can be used in new, inventive ways to meet modern needs with vintage charm.

“We tried to keep as many (original details) as possible, and we even introduced chalkboards into some of the rooms,” Ciavarella said. “We did some sliding barn doors in our office, and we put the slate from the chalkboards on the front of the doors, and we used them for countertops. It’s just a great material, and we tried to use as much as we could from what we had in the building. It was fun to do.”

And it was done with a material free to them, that they might otherwise have had to pay to dispose of.

Updating an existing building can be more complicated than building new, however.

Meidinger said the key to a successful project often starts with identifying the big-picture goals, then breaking it into smaller, more manageable parts, and tackling them one at a time.

The Ellendale (N.D.) Opera House is a prime example of viewing the end result as the product of several small projects, rather than one major one, according to Meidinger.

“(Community members) have a priority list of what’s most essential to saving their building, which would be the (structure) first, and then what would make it useable, so they’re focusing on one thing at a time,” she said. “They did a roof project, and then they stabilized the back wall, and then they did the upstairs,” she said. “They’ve been working on it piece-by-piece, because our grants are a 50/50 match. So, as they raise funds, they’ll get half of the project that they want to do, and then they apply for a grant from us.”

An essential aspect to a group of people working on a project step-by-step is having a solid group of key players.

“When you break it down like that, it takes quite a few years to get it done, and they’ve had some of the same people involved the entire time, as well as new people,” Meidinger said.

‘People respond to the character’

“Craftsmanship and workmanship went into it the first time. Who wants the ‘cookie cutter’?” Meidinger said. “What’s special about your building or your business is what keeps people coming back.”

In Clark (S.D.), Clay Yeoman started the remodeling process at a triple-address building on Main Street in 2003, when he installed new windows and larger doors and restored the molded tin ceiling tile and wood floors in an attempt to recapture the look of the early 20th century.

The resurrection process continued this summer, when Heather Johannsen purchased the building and turned 121 E. Main Street, along U.S. Highway 212, into Heather’s Bistro and More.

“I just love old buildings,” said Johannsen. “My customers have commented that it has a cozy feeling to it when you walk in. They like that.”

In less than two months’ time, Johannsen remodeled the interior and installed all of the necessary equipment for a restaurant/coffee shop.

The remodel allowed the building to accommodate multiple businesses—there are three office spaces, as well as apartments on the second floor of that address and the two adjoining, which house Total Image Hair Salon and storage for Johannsen’s business.

From Ciavarella’s perspective as a businessman, older buildings are “really great investments for those who are willing to work through the details.”

Spaces such as the apartments in his company’s Whittier building in Mitchell are an easy sell: “People come in, and they look at the space, and they know they’re in a special place,” he said. “The ceilings are higher, the windows are bigger, there’s more light. … People respond to the character of the building, and most of the older buildings have some form of masonry or stone construction, so the exteriors usually need a little work, but once that’s done, you have a mostly maintenance-free exterior.”

Ciavarella said many older buildings are structurally sound and are worth the investment.

“Very old buildings are very well-built,” he said. “The walls are much thicker than the walls we construct today, and … a lot of them are concrete construction.”

Still, Ciavarella pointed out, not all structures are salvageable.

“There are some buildings that just can’t be saved,” he said. “They’re just too far gone, so we aren’t out there, trying to save every old building. But we certainly look at them seriously, and we try to find a use if there can be one.”