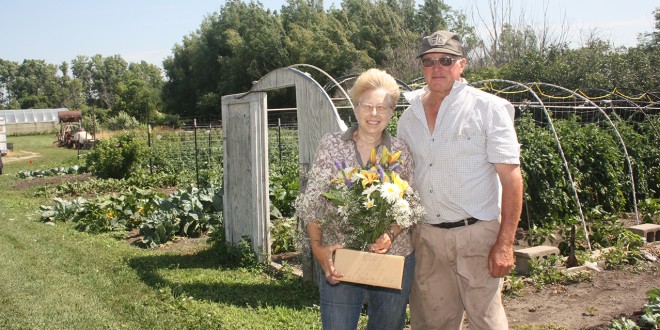 Delores and Nelson Bloomquist have been participating in the local farmers market since 1997 selling everything from flower bouquets, shown above, to tomatoes, potatoes, decorative corn and pumpkins and every vegetable that can be grown in South Dakota as well as raspberries and apples. Photo by Kimberly Harrington/Clark County Courier

Delores and Nelson Bloomquist have been participating in the local farmers market since 1997 selling everything from flower bouquets, shown above, to tomatoes, potatoes, decorative corn and pumpkins and every vegetable that can be grown in South Dakota as well as raspberries and apples. Photo by Kimberly Harrington/Clark County Courier 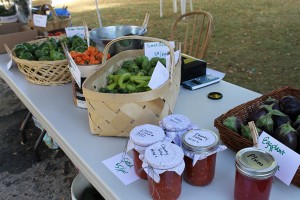 Farmers taking their goods to market in the James River Valley nowadays typically means a semi-truck loaded with corn, soybeans or cattle heading off to a sales point (an elevator or a sale barn), just the first stop in a chain of processing facilities before goods reach the consumer.

But communities across the nation, including dozens in the Dakotas, are joining in a growing nationwide trend of forming markets with much shorter farmer-to-consumer transportation systems: goods go straight from the farmer’s hands to the consumer’s.

In addition to supporting local farmers, many of these markets are becoming settings where the community can gather.

In Britton last Tuesday, for example, many young moms didn’t take their kids home right away after swimming lessons. Instead, they gathered at the Greater Britton Country Market in City Park, where they put down blankets, fed their families at a meal served by a local community organization and let the kids play while they shopped at local vendors, visited and enjoyed the summer evening. Most weeks, local musicians also provide entertainment.

The meal is an important part of the evening, as many senior citizens stop by to eat or pick up a meal to go, according to Marcey Jones, one of the market’s organizers.

The market started after the sales of vegetables by Jones’ family (Tom, Marcey and their children) sparked interest in the community, but it has grown since then, Jones said.

“From the original idea of just selling vegetables it went to something completely different,” she said. “I think the community gathering spot has become the most important aspect of the market. A lot of our (typical) crowd is the older generation in town, and that’s kind of what we were going for was to pull different generations together. That’s the fun part, to see that happening.”

The list’s numbers may well be lower than the actual number of markets operating, as the numbers are self-reported from various farmers market organizations. The USDA’s list reports 37 markets for South Dakota, for example, but a list maintained by the S.D. Department of Agriculture has 47 markets.

The USDA’s list shows 62 markets in North Dakota, but it is missing at least one: the Coteau Hills Farmers Market in Kulm, which started last year. 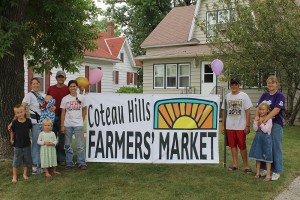 “When my husband and I decided to move to Kulm, we wanted a plan for how we could give back to the community,” said Sarah Gackle, manager of the Couteau Hills market. “We both felt passionate about a farmers market, so we did a few trial gardens, and then I approached the city council about starting a formal market last year.”

The market typically has about five vendors and averages about 70 people attending, Gackle said.

“We are not overly ambitious with this. It is something we care about, but we have busy lives that this has to fit into, and none of us are trying to make a living at it, so we only hold the market every first and third Tuesday of the month,” she said.

Even on a smaller scale, the market so far has been very successful.

“People look forward to the market and enjoy being there,” Gackle said. “Our vendors almost always sell the majority of whatever they bring to sell.”

The increase in farmers markets is tied to rising consumer demand for local food.

A congressional report from 2012 (“The Role of Local Food Systems in U.S. Farm Policy”) outlined a number of reasons that local food supporters give for the increase in demand, including the freshness of food (most supermarket produce is 7 to 10 days from harvest once it is on the shelf, while farmers market produce is often just hours from picking), support for local farmers, and keeping money in the local community (buying direct from a producer keeps 35 cents of the food dollar in the local community, compared to just 15 cents when food is purchased through a chain store).

Consumers are also more interested in knowing where their food comes from—and not just the location, but knowing the story behind their food. Leading food commentator Phil Lempert noted that alongside celebrity chefs, “celebrity farmers” are growing in popularity. Rick Schnieders, chairman of the SYSCO Corporation, which distributes food to restaurants, hospitals and other institutions nationwide, said in 2003 that consumers are interested in “memory, romance and trust” when it comes to their food: The want to connect to a food system that’s not all that different than what their grandparents grew up with, they want to have some sort of relationship with the person who grew the food, and they want to be able to trust that the food that they provide their families is safe.

Delores Bloomquist of Garden City (near Clark) and her husband, Nelson, said the Watertown Farmers Market, which they have participated in since 1997, started in part from demand from customers who wanted to buy local food. To ensure that customers get the local food they want, the market has rules that vendors must follow: The produce must be grown by the seller, and the seller has to have a South Dakota sales tax license and a local vendor’s license, Bloomquist said.

While other markets have allowed craft items also, the Watertown market limits sales to produce and agricultural goods. “The goal is to sell local produce,” Bloomquist said.

The Bloomquists keep an eye on local trends and try to accommodate requests in the food they bring to the market. This year, for example, they’ve brought more kohlrabi, a vegetable in the cabbage family, to the market in response to demand.

This highlights one other benefit that consumers cite in farmers markets: Access to fruit and vegetable varieties that aren’t available in grocery stores, which are limited in the number of varieties they can carry. 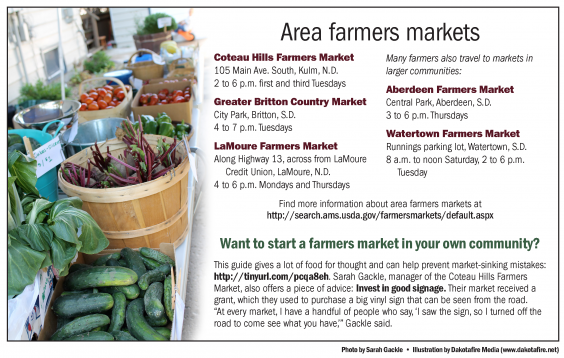 Farmers markets can also play a role in a larger effort to increase the sales of local food in the region. The Northeast Iowa Food and Fitness Initiative, which included not just farmer-to-consumer sales but also farmers’ sales to restaurants, schools and hospitals, increased sales of local food from $10,000 in 2006 to more than $2 million in 2010.

So far, the biggest benefit listed by organizers of local farmers markets is the community gathering space the events provide.

Even at the Watertown market, where community gathering was not a goal, people tend to linger and talk at the stands, Bloomquist said.

And in Britton, as mentioned above, and in Kulm, community gathering is at the heart of the market.

“We try to foster that environment by setting out chairs in the shade near our market and selling lemonade and root beer floats, just to give people a reason to sit and talk,” Gackle said. “One of my goals for this year was to have a market with live music, which I think adds to the festiveness of the atmosphere and gives people another reason to come and stay a while.”

Getting the community together is an essential part of the market’s mission, Gackle said. “I would not host the market if I didn’t think we were accomplishing that.”