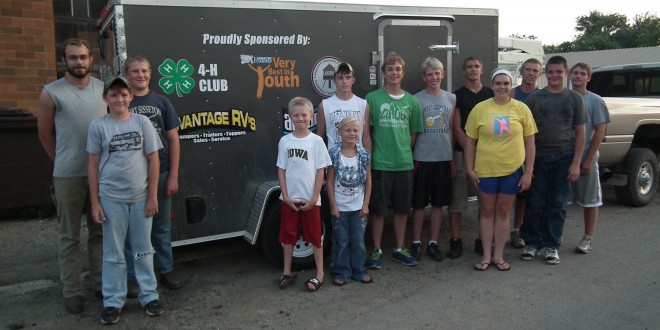 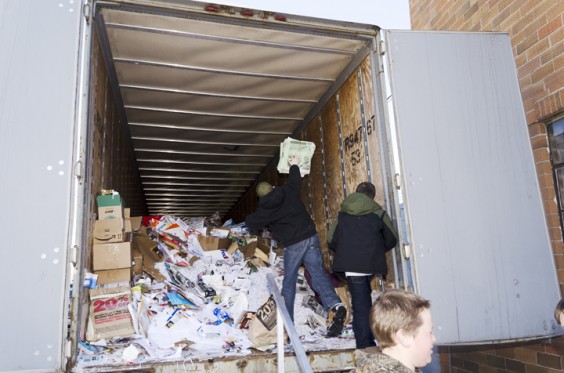 Marshall County 4-Hers Kordell Feldhaus and Weston Henschell add paper to the heap in their recycling trailer. Photo by Troy McQuillen.

The paper recycling project in Marshall County started through the work of Patty Ogren in Langford. She had tried to get a large recycling trailer in Langford, but she realized they wouldn’t have enough volume to make it worthwhile. By working with the Britton groups, however, they did.

“The 4-H families and volunteers who donate their time to maintaining the trailers are to be commended, as are the people who collect and drop off their paper at either trailer,” said Jennifer Ringkob, 4-H youth program advisor in Marshall County.

Langford has its own side project for the recycling effort: A small trailer parked in town holds the paper before it is hauled to the larger trailer in Britton. That smaller trailer was purchased through group fundraising efforts, including a grant that Langford student Kristen Erickson received from the Hershey Foundation.

“Recycling really makes sense. It’s just garbage to us, and here someone can benefit from it,” Ogren said. She explained that there is no cost to the 4-Hers, beyond the donated labor. “As stewards you don’t really want to put this garbage out on the Earth. You’d just as soon use it or recycle. This is just kind of a bonus because you get paid for it.”

The group sees this as a good place to start recycling in the community, since it has such a clear benefit. They hope to add recycling for other items someday, even if those efforts may have a cost attached.