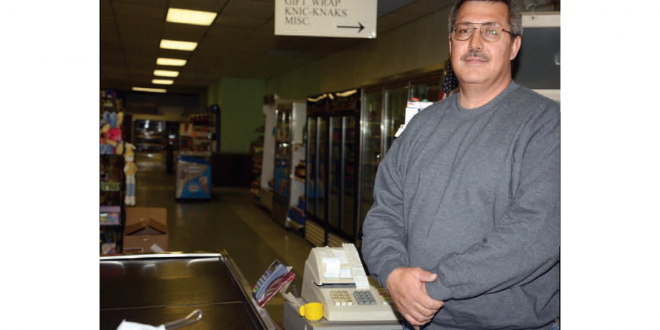 By Webster Reporter and Farmer April 3, 2013

Loren Welch hadn’t realized that he would retrace so many of the same steps in life that his great-grandfather had in the late 1800s.

“I just think it’s kind of ironic that one of his decedents would unknowingly follow the same path,” Welch said.

His great-grandfather Albert Barse was one of the first white settlers in the area, according to Welch. He had served in the Northern Army during the Civil War and then started a trading post and lumberyard around Waubay. The area’s first post office was also housed at that trading post.

The similarities in Barse’s great-grandson are almost uncanny. Welch served 20 years in the military, works as a part-time route carrier assistant for the Waubay Post Office and now owns a grocery store in Waubay, which he considers a modern-day trading post.

Born to Wallace and Gloria Welch in Sisseton in 1965, Welch was one of five children. He joined the Navy in July 1983, just two months after he’d graduated from Waubay Area High School.

“My whole family has served in one branch or another of the military,” Welch said.

“So, not knowing a lot, I joined the Navy,” Welch said with a laugh. He joked that he didn’t know how he’d thought he’d get along when he didn’t even like being on a boat on the local lakes when the wind came up.

As it turned out, Welch was assigned to the Naval Mobile Construction Battalion 5. He joked that the most time he spent on a ship during his time in the Navy was for a tour.

Stationed first in Port Hueneme, CA, Welch helped build anything needed on a military base anywhere around the world. This ranged from runways and barracks to pistol range areas and even day care centers. His battalion also remodeled a lot of buildings.

“Basically, if there was something that needed built on a base somewhere, we would build it,” he said.

During his career in the Navy, Welch was deployed to such places as Okinawa, Japan; Subi Bay, Philippines; Sigonela, Sicily; and Panama. He was also stationed in Misawa, Japan; Watertown, South Dakota as a Navy recruiter; Chania, Crete; Greece, London, England and Groton, Conn.

“Okay, here’s a funny story,” Welch said of his first recruitment while being stationed in Watertown. Welch convinced his youngest brother, John, to sign up for the Navy before he’d even been trained as a recruiter. The Navy gave Welch credit for that recruitment although he wasn’t officially a recruiter yet. “That was pretty neat,” Welch commented.

While stationed in Greece, Welch met his wife, Dolores. They met at the wedding of a mutual friend. After that June wedding, they didn’t see each other for several weeks and then happened to bump into each other. They were married in Greece the following June.

When Welch was stationed in England, he lived in downtown London and said that was a different experience. He said the public transportation system took some getting used to, such as riding a double-decker bus to work each day.

After England, Welch was stationed in Connecticut. For his new bride, coming to the states was hard, he said.

“She’d never been to the U.S. before,” Welch explained.

He added that while most foreigners acknowledge that they want to someday see the United States, “Dolores, she didn’t.”

Welch joked that he doesn’t know why she hooked up with an American then.

Their son was born while they lived in Connecticut. Joshua is now 10 and in the fifth grade at Waubay Elementary. Welch also has two other children from a former marriage.

Twenty years to the month after he joined the Navy, Welch retired in July of 2003 and moved back to South Dakota.

“I came back to be around family,” he said. “I’m a very family oriented individual.”

But being gone for 20 years, Welch said, tends to change things. He said it’s strange to deal with the children of the people that he grew up with.

“It’s amazing when you’re gone for 20 years, what you miss,” he said. “Actually, my wife probably knows more people around town than I do now, and she’s not the one who’s from around here.”

In August 2003, Welch purchased the grocery store in Waubay.

“So, I bought the place, knowing nothing about the grocery business,” he said with a laugh, and added that his wife mostly runs things.

This summer, they’ll celebrate a decade of ownership.

Welch says one of the aspects he enjoys of being a small business owner is being able to do other things on the side, such as helping folks out around town where he can. In the winter, he plows snow for elderly and his skills as a plumber that were learned in the Navy are often employed.

“Having a business like this in a small town affords you the opportunity to get out and do other things, such as helping people,” Welch said.

Welch doesn’t ask for payment for his services.

A new endeavor for Welch will begin April 1 when he’ll be going back to college – online, that is. He is planning to obtain a degree in construction management.

Welch says he found out he enjoyed working in construction when he first moved back to Waubay and landed a job working with the tribal construction.

Although he enjoys the small town atmosphere – which is good for raising kids, he added – at times, running a business in a small town can get tough. In Waubay, the store has taken a hit with the shrinking population caused by the rising flood waters in recent years.

“A lot of people were affected,” he said. “That cut down a lot on business.”

Welch was directly affected by the rising waters when FEMA bought his house.

While he lived away from Waubay, Welch said he most missed hunting and fishing.

“Most of my time (in the Navy) was spent overseas,” he said, then laughed when he added, “I don’t really know what you would hunt in Japan.”

He said that he also missed the small-town atmosphere, but at the same time says he occasionally misses the conveniences afforded in the big city.

Sometimes Welch gets antsy about having lived in one place for so long. During his tenure in the Navy, he was moving every few years, so 10 years in Waubay feels like a long time to sit still.

When their son graduates, Welch and his wife are planning to move to the Philippines to be closer to Dolores’ family.