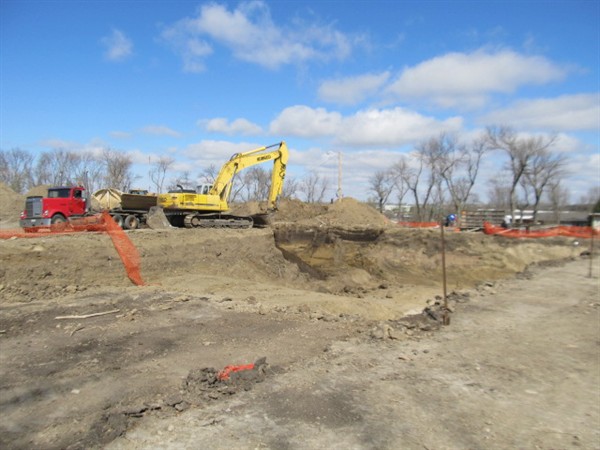 Webster has an innovative funding source for new pool: Recycling

Construction for the new pool in Webster began in spring 2012. Photo by WAVE.

Sometime next summer, when Webster residents are enjoying their new pool, they can do a little thank-you lap for all the community- and environment-minded people who set aside their recycling to help make it happen.

The new pool, which is being built by Aberdeen contractor JDH, is being financed through a 20-year bond issue and by volunteer fundraising. One of the key components in those volunteer efforts is can and paper recycling.

Volunteers for WAVE, the Webster Aquatic Venture for Excellence, which has spearheaded the effort to get a new pool in Webster, began recycling aluminum cans in 2006 and have raised over $11,000. Paper recycling began in December 2010 and in a year’s time raised over $8,800.

Webster residents aren’t the only ones supporting the effort.

The current Webster pool was built in 1965. According to engineers the life expectancy of an outdoor pool built in the 1960s is about 25 years.

Over the past decade the pool began to leak. Engineers advised WAVE they couldn’t guarantee repairs would work and the cost of the repairs would be about 40-60 percent of a new one.

Realistically those repairs would have bought another five to 10 years of use. Also, the old pool wasn’t handicapped/elderly friendly and its bathrooms didn’t meet code. The nearest public pool for lessons and/or activities is in Bristol about 11 miles away.

Community support for a new pool has been strong. Overall about $900,000 has been raised or pledged to this point and WAVE is kicking off a fundraising drive to purchase play features that range from $5,000-$20,000. If anyone is interested in donating they can contact Tom Sannes at 881-3800 or check out the WAVE website.

WAVE volunteer Clara Roerig is working with a woman in Wessington Springs who is saving paper for the pool drive. She’s made four trips to pick up recycling and each time her car has been packed full.

Clay, who is retired but works summers at Moccasin Creek Golf Course, got involved through his stepdaughter Catrina Hruby. Since buying in, Dykema has delivered between two and three tons of paper.

Clay says his efforts are more than just the stuff that comes from home. He picks up regularly at the Aberdeen library, his church and from the clinic where his wife works.

“My pickup has a six-foot box and a topper, and there’s been times when I’ve come over there that it’s been sagging really low,” he said. “I’m into recycling and I believe we need to keep as much as we can out of our landfills. I’ve even been looking at ways to recycle electronics.”

It’s estimated that more than 220 tons of paper have been recycled. Individual volunteers and organizations are assigned every week to push and stack the paper to the front of the trailer.

Currently, the paper trailer fills up every six weeks, and they would like to fill up a trailer at least once a month.

The paper and can recycling trailers are parked in the lot behind the Webster fire department. Cans should be crushed, free of garbage and bags tied tightly. Paper must be clean of garbage, in paper or plastic bags or bundled with string. Acceptable paper items for recycling include newspapers, magazines, office/printer/copy paper, envelopes/junk mail (envelopes with plastic windows are okay), phone books, school papers, shredded paper, light grocery boxes such as cereal boxes (clean and flattened to save space), paper towel and toilet paper rolls. Volunteers ask that no corrugated cardboard be dropped off unless filled with clean paper. Small staples are okay, but any larger staples or paper clips should be removed. Hardcover books are acceptable if the covers are removed.

The trailer doors are open unless it’s snowing, raining, or full. Anyone with questions can contact Rose Vogl at 605-880-7837.

Thanks to the Reporter & Farmer for sharing this story.