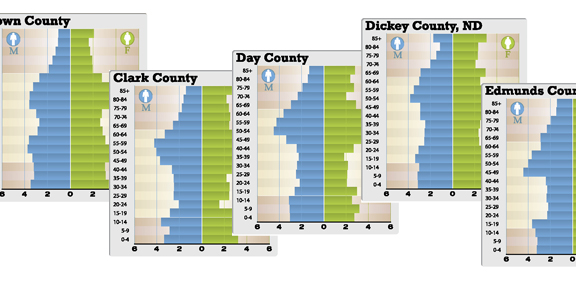 We’re all time travelers, traveling at the same speed-one hour per hour. We age at the same rate, and then look with surprise at an old person staring back from the mirror.

Much of our region is, in a way, getting older as well.

Because of the continued outmigration of young people, in many rural James River communities the largest component of the population is now the elderly. This shows up clearly in the counties’ population pyramids, which are a way of showing age distribution in the community. 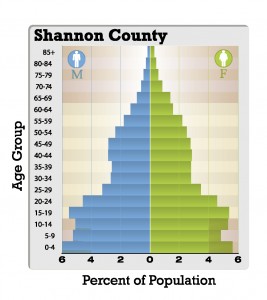 Shannon County, S.D., is an example of a young county.

A century ago, before medical and sanitation advances, these graphs for most of society actually looked like pyramids, with a lot of young people and few older people. Shannon County, South Dakota’s youngest county, still has a traditional-looking pyramid.

None of the counties in the James River area have population pyramids that look much like pyramids. (Demographers still use that term, no matter what they look like.) They are instead much more uneven—if they were stacked blocks, some of them seem as if they would be too top-heavy to stay upright. They have what demographers call a wasp-waisted display—a segment of the population in the middle of the very old and the very young is under-represented.

So what would a “healthy” population pyramid look like?

The dependency ratio is an age-population ratio of those typically not in the labor force (the dependent part) and those typically in the labor force (the productive part). It is used to measure the pressure on productive population. The higher the ratio, the more people there are in a region who depend on others for care. Graphic by Troy McQuillen

Defining the “healthiest” dependency ratio, and the best shape for a population pyramid, is a difficult task-in part because the population age distribution will change as the population gets older, and what is healthy in one generation may have problems in the next. But there are some general guidelines.

A population pyramid that gradually slopes inward, so that the bottom bars are not much wider than the top bars, is generally healthier than a pyramid that is greatly uneven in any way. This likely won’t exist anywhere in real life—the baby boom shows up in every Dakotafire pyramid, for example.

So far we don’t have any inverted pyramids, or dependency ratios over 100—but if we did, those would be even worse.