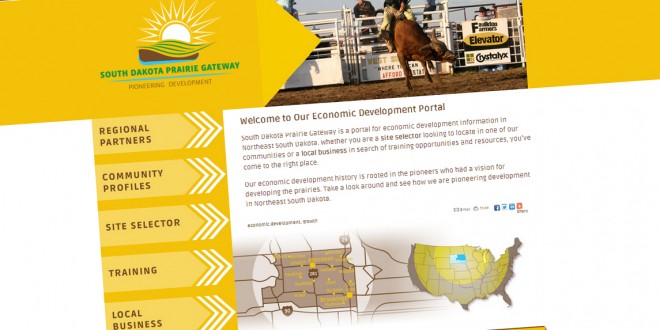 Note: This article, about forming partnerships to think strategically about economic development across an entire region, didn’t fit in the latest issue of Dakotafire. Check out the magazine for more ideas about how communities can build up their local economies—the magazine was inserted into participating newspapers this week, and stories will be uploaded to Dakotafire.net in coming days.

What town is your town’s rival?

Most Dakotans could answer that question easily: It’s the opponent the home crowd gets most fired up about playing on the football field or basketball court—generally a town not too far away, an easy drive down a state or county highway.

When the goal is rural economic development, however, that rival is likely going to have to become a teammate—probably along with the rest of the teams in the conference—to build up the economy of the entire region.

At least, that’s the contention of several research projects conducted in the last decade that suggest that the best way for rural places to compete in a global economy is to work together as regional partners.

A summary from the “Past Silos and Smokestacks” report:

The path to stronger economies in the rural Midwest is plain. Partnering regionally to compete globally is what’s needed. This pathway will lead to scores of multicounty, self-defined regions across the Midwest. Only by combining their forces to create new businesses and good jobs at home will the towns and counties of the rural Midwest compete and thrive in a global economy where this sort of collaboration is fast becoming the norm.

The rural Midwest needs a bold new development strategy to transform its economy. The strategy developed in this report stands on four legs:

“Only by combining their forces to create new businesses and good jobs at home will the towns and counties of the rural Midwest compete and thrive in a global economy where this sort of collaboration is fast becoming the norm,” wrote Mark Drabenstott in a report titled “Past Silos and Smokestacks: Transforming the Rural Economy of the Midwest.”

Several organizations in the James River Valley have recognized the benefits of thinking regionally, and have stretched their traditional boundaries to do economic development work that benefits a larger area—countywide versus town by town. And many of those organizations recently joined forces to take part in a regional economic development effort called South Dakota Prairie Gateway, which combines efforts in website development, training and more. Other regional efforts are in the works.

Paula Jensen of Langford holds positions in two organizations with a regional focus: She’s president of Glacial Lakes Area Development (GLAD), which represents communities in Greater Marshall County, and she’s also funds development director at GrowSD, which has served as the coordinating organization for the SD Prairie Gateway initiative.

“The regional development framework helps rural communities focus on not just their own successes, but also the success in surrounding communities, which can positively impact the entire region,” Jensen said. “The GLAD philosophy has always been, ‘What is good for one GLAD community is good for another.’”

For many decades, economic development efforts in the Midwest had a common strategy: “Recruit a factory to the edge of town, and give away the farm to get it,” wrote Drabenstott, who served as the director of the Center for Regional Competitiveness at the Rural Policy Research Institute through 2010. (The report can be found by searching online for “Past Silos and Smokestacks.”)

While rural areas could boast lower labor costs that urban America, this strategy worked—but several negative side effects came to light later. First, towns competed fiercely with one another for the factory up for grabs, making collaboration (and all the efficiencies that come with it) rare. Second, the majority of economic development funding went toward industrial recruitment, so much less money was available for new or small businesses. When even cheaper labor was found overseas, the “chasing smokestacks” strategy no longer worked very well, and worse, it had not created partnerships or built up entrepreneurs that would have helped future development, Drabenstott wrote.

“Put another away, the era of single community/county development is over,” Drabenstott wrote about their findings. “Achieving a level of ‘agglomeration’ is critical to success.”

Certain “powerful synergies” happen at the regional level that don’t happen in smaller groups: A greater variety of skills is available in the labor force, and more capital is on hand for new businesses, for example.

Another way that a regional focus can help is that several communities working together can afford an economic development director, which often wouldn’t be possible otherwise. This person can move projects forward in a way that a volunteer board can find difficult.

Having more funding available for development efforts is another benefit of pooling resources. Many of the county-level groups offer revolving loan funds, which GLAD Executive Director Scott Amundson says are a great asset to be able to offer the community.

“I think we’ve saved or created right around 51 jobs in the greater Marshall County region by utilizing these funds,” Amundson said. “Eventually, our goal is to build that fund to over a million dollars and be able to operate our non-profit by the interest in generates while revolving the principal repaid back into our communities and small businesses.”

“In today’s tight financial markets one of the biggest challenges is reaching a critical capital level for capital outlay purchases,” Price said. “Trying to put together a package for initial startup, or even for improvements, can be daunting. What our organization has tried to accomplish is to get as many players in the room with the business owner so that a total package can be worked out with more than one financial institution or organization sharing the risk.”

Sharing ideas between economic development partners can be just as fruitful as sharing funding, according to Jensen.

“With the regional approach we also share good ideas that have worked in our communities” so that other communities can benefit as well, she said.

How big does a development effort need to be to get the most out of the “synergies” of regional cooperation? The “Past Silos and Smokestacks” report suggests that a region should be bigger than a city, and bigger than a county: “(I)t is probably not off base to suggest somewhere between fifteen and thirty counties in much of the Midwest, and perhaps more than that where population density is lower,” Drabenstott wrote.

That happens to be at the level of the South Dakota Prairie Gateway project, which brings together 16 small communities across 30 counties in northeastern South Dakota. The effort combines online recruitment efforts so that a business or entrepreneur looking to relocate can find information about the whole region in one place (www.sdprairiegateway.org).

Faulk County representatives are pleased with their website, which is part of the S.D. Prairie Gateway network.

“(It is) one means by which we can reach a wider audience, improve communication, and spread the word about the opportunities available in Faulkton and Faulk County,” said Joel Price, chair of the Faulkton Area Economic Development Corporation.

The groups involved in this effort, plus several other economic development organizations, meet quarterly at a regional economic development meeting to hear speakers address issues relevant to their communities. They also each take a turn sharing notes on what is working and what is not in their communities, often asking for or sharing advice. The group is convened by Grow South Dakota.

The examples of regional development in the Dakotas suggest that it’s a model that works well here. Amundson said he sees the rural nature of Dakota communities as an advantage in regional partnerships.

“People and communities here have a true collaborative spirit and work well together for the benefit and betterment of (a region’s) citizens and businesses,” Amundson said.

And the new global economic reality makes it much more important that small communities build some clout by joining forces.

“(I)n a 21st-century economy, we are all partners together,” Price said. “No one business can stand alone. Plus, no one organization has the people in place to reach everyone. Working together we are a stronger voice for rural South Dakota.”

And who knows—as that united voice gets louder, small towns may be more likely to call the town down the road a partner, instead of a rival. Until Friday night, anyway.

What do you think?
Join the conversation at the Dakotafire Café!

Dakotafire’s new forum site has launched! Share your ideas on how to make our region a better place, comment on others’ ideas, and get prizes for participating. Some of the most popular ideas will be published in participating newspapers. Check it out at www.dakotafirecafe.com.

For this story: Is your community working with neighboring communities on economic or community development? How do you think James Valley communities could work better together?