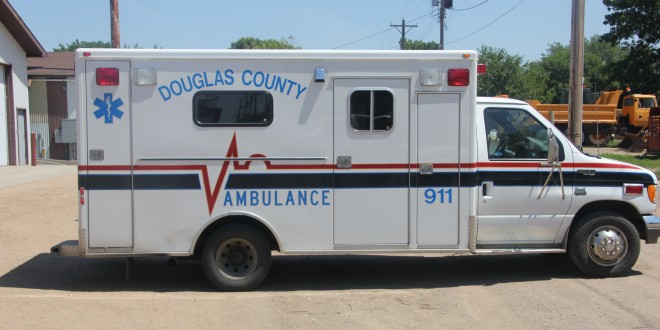 The Douglas County Ambulance. Photo by The Corsica Globe

Rural ambulances face their own emergency

The first in a three-part series

If you have an emergency in Hecla, S.D., during typical weekday business hours and need medical help to come to you, you know Becky Berreth is going to answer the call. She has served as an emergency medical technician in Hecla for 27 years.

Unfortunately, she’s probably the only one who’s going to come in the next 45 minutes.

“The most EMTs we’ve ever had is six, and now we have three people certified, and I’m the only one available during the day,” said Becky Berreth, who has served as a Hecla EMT for 27 years. “Basically I can’t go anywhere and do anything. It’s hard to have a life.”

Having only one EMT available does not meet state rules for ambulance services, so the department was granted a hardship waiver for one year. That expired last month. Without additional volunteers, they have given up the ambulance license and become a first responder unit instead, meaning they can arrive to treat patients but cannot transport them.

Berreth said she will continue as a first responder, but she expects it to be difficult.

“It will be hard to just sit there and wait for Aberdeen to come, which is going to be 30-45 minutes depending on weather conditions,” she said. “We’ve had cases that if we would have had to wait that long there would have been a different outcome.”

Rural ambulance departments across the Dakotas, which have struggled for years to have enough volunteer EMTs, are hitting a tipping point: Some are not able to continue as they have for decades. Others will face decisions in the next few years. What’s changed? How will it affect rural communities? How are people thinking differently about how to treat medical emergencies in rural communities?

This is the first in a three-part series on ambulance service in the rural Dakotas.

Several factors come into play as communities struggle with the declining number of EMTs, but one issue comes up nearly everywhere: The lack of available volunteers during daytime hours.

“Our biggest problem is daytime coverage,” said Karen Johnson, Corsica (S.D.) ambulance director. “One is an electrician who owns their own business, one is a school teacher, one is a nursing teacher, and that leaves two moms. That’s all there is, besides the EMR, who is also a farmer’s wife. In the evenings, we generally don’t have much problem, except maybe a Friday night.”

The problem is in part a matter of changing patterns in where people live and work. Many rural communities have fewer businesses as the rural population has declined, which means fewer people working in town. Many of those are one-man or one-woman operations, which means it is more difficult to leave to respond to a call—if that one person leaves, the business is closed for an hour or more.

But another factor is what community the people working in town call home. Commuting data from the Census Bureau show that people increasingly work in a different community from the one in which they live. The people working in rural communities—the ones typically there during the day—are more likely to be commuting to those communities from elsewhere than they were even 10 years ago. The urge to serve the community might be less if it’s not the same community where one’s own family lives. (See the May/June issue of Dakotafire for more information about commuting and community.)

Other communities have struggled to find enough volunteers any time of day.

“Our problems of finding coverage are not only during the day, but also in the evenings and weekends,” said Gackle (N.D.) Ambulance Squad Manager Melody Owen. “We have seven EMTs on our roster with five of those individuals providing the majority of the call time, filling shifts as both the EMT provider and the driver positions. We also have two CPR-qualified drivers that cover on a part-time, as-needed basis.”

Another issue discussed was the fact that training to become an EMT is more difficult and time-consuming than it was a few decades ago, making it more difficult to ask for volunteers to go through the training. Many ambulance service leaders say continuing education requirements, training requirements and participation in drills and exercises are taking more time than in the past, and some volunteers are unwilling to donate additional time. They also reported that increasing transport distances are requiring longer time commitments, which also asks more of volunteers.

One of the first things that Marilyn Rutz, director of Emergency Medical Services in South Dakota, recommends to struggling ambulance services is to make a concerted effort to recruit EMTs.

“Have community meetings,” Rutz said. “Many times the majority of people in a community are not aware that there is a problem or shortage of help. Hold open houses, let the community see what equipment you use, the training that is required, what things cost, let them know what care can be provided at the different levels. Offer to hold an EMT class — encourage people to take the class.”

Many communities cover the cost of gaining EMT certification, which is the same training required to serve on any ambulance service in the United States.

Curt Halmrast, President of the N.D. EMS Association and an Oakes (N.D.) paramedic, said they pay for EMT training for anyone willing to join the Oakes ambulance service. They also allow people to join the service as drivers with just four hours of training, hoping that at least some of those drivers will become interested enough to get full EMT training, which takes 110 hours to complete.

They’ve done whatever they can think of to get the word out about the need for EMTs.

“We have run ads in the newspaper and radio and had booths at local events,” he said. “As of late we have recruited other medically trained staff. Currently we have two nurses that are joining our service that already have much of the medical training, they just require the EMS portion. I believe we are no different than any other community that is short-staffed. We have tried numerous things to get more members.”

The Corsica Ambulance Service has followed much the same path.

“We’re trying to recruit drivers, and hopefully the drivers will become EMRs (which requires 40 hours of training), and hopefully once they become EMRs, they will become interested enough to become EMTs,” Johnson said. “We’re just hoping to pique their interest in being EVOC drivers, or EMRs would be great, too. We’ve had a lot of newspaper ads but we have not had any interest.”

The problem may come down to demographics: Maybe there just aren’t that many people to recruit. In Hecla, a special meeting about the ambulance department’s situation had a good turnout but nevertheless yielded no new EMTs.

“We had almost 30 people at that special meeting and nobody volunteered,” Berreth said.  “But when I sat there and looked around I think there was only one or two people under the age of 50.”

In communities that want to keep their ambulance services, those one or two people are going to be asked to serve.

“The next thing we’re going to do is start knocking on doors,” Johnson said. “We don’t know what to do next to try to get people onboard with us.”

The next story in the Dakotafire series will look at how medical care in rural communities could be affected by changes in ambulance service. Watch for it on Dakotafire.net Wednesday.

In South Dakota, there are five levels of EMS providers:

In North Dakota, there are five levels of EMS providers: