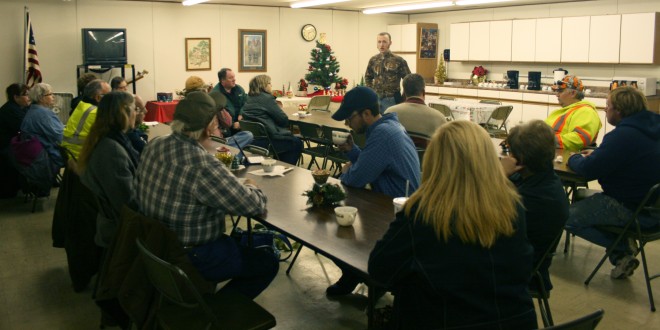 Members of the Frederick community determined they could no longer guarantee 24/7 response with the EMTs available, and so they gave up their license. Here, Cole Adema, director of the Frederick Area Ambulance, explains some options. Photo by Heidi Marttila-Losure

Life-saving rapid response in jeopardy in some communities

The second story in a series

When a medical emergency happens, it’s as if a clock starts ticking.

“The world of EMS revolves around the concept of the ‘golden hour,’” said Corsica (S.D.) Ambulance Director Karen Johnson, “meaning patients have one hour from the time of injury/cardiac arrest to be able to get sufficient help.”

Whatever the emergency, what happens in that golden hour can determine the prognosis: Whether a patient lives or dies. Whether that person recovers fully, or lives with permanent damage.

“Especially with a cardiac arrest, we have only minutes to get there and save a life,” Johnson said. “In a trauma, it’s that ‘golden hour’ that we have to get to the patient and get them to the hospital to give them the best chance. Once that golden hour is gone, the chances of survival go way down.”

As rural ambulance services struggle to find enough volunteers to maintain their services, it’s the moments of that crucial golden hour that tick away when help takes longer to arrive, or even fails to arrive.

Because rural ambulance services often have low call volumes and limited reimbursement from transports, they have relied on the subsidy of donated or volunteer labor to make their operations possible. For years, this model has worked.

For a variety of reasons, including demographic and commuting pattern changes, it no longer does.

“This is a problem nationwide,” said Marilyn Rutz, director of South Dakota Emergency Medical Services. “It is not unique to South Dakota.”

Rutz said that of the 123 ambulance services currently licensed in the state (not including air ambulance services), 25 have hardship exemptions, meaning they can respond to a call with just one drive and an EMT.

The volunteer shortage has caused the state to make exemptions to the rules,” Rutz said. “South Dakota normally requires a minimum of 2 EMTs on all service calls.”

The number of ground ambulance services in South Dakota is at least seven fewer than it was 20 years ago, as some services have closed or combined with other departments.

“Over the past 10 years, five ambulance services have been turned into substations, one has become a quick response unit and two have had to give up their license completely,” Nehring wrote in an e-mail. “Substations became an option for communities to work under a headquarters ambulance service and transport patients but they do not have to be available 24/7.”

Of the licensed ambulance services, 21 are Advanced Life Support, 108 are Basic Life Support and 5 are Industrial ambulances.

The value of the “volunteer subsidy,” or donated labor, to local ambulance services is more than $31 million per year in North Dakota, Nehring said.

“In the last decade, that subsidy has begun to go away,” he said. “The impact is serious. As rosters shrink, fewer people take more calls and do more runs. Some EMS workers are on call for days and weeks at a time. Some ambulance services rely on two or three active people for most of their calls, and a few services have trouble mustering crews at certain times of the day or week. Some services are experiencing delayed response, and some are even missing calls. Such a situation is dangerous for patients, the public and for overworked EMS workers.”

Sometimes the loss of an ambulance service can have unexpected consequences.

When members of the Frederick (S.D.) Ambulance Service decided in January they could no longer guarantee that they would have two emergency medical technicians able to respond to emergencies 24/7, and thus gave up their ambulance license, they knew they would no longer be able to transport patients. But they had often waited for paramedics from Aberdeen to arrive to emergencies to transport anyway; for many calls, their operating procedure would remain unchanged.

What they did not expect was that some of the continuing training that had previously been covered by the state no longer would be. And they didn’t realize that they no longer qualified for some funding that would have provided them with some advanced CPR equipment.

Most frustrating for the Frederick first responders was a misconception among at least one if not several Brown County dispatchers that Frederick had a fire department only and was no longer to receive any medical calls.

“We found out in July that we were not getting sent to our own calls,” said Cole Adema, director of the Frederick Area First Responders. “We don’t know how many we missed.”

They know it was at least one, as Adema saw an ambulance go by his home and started calling around to find out why his pager hadn’t gone off. The Frederick Ambulance Service received an average of 30 calls a year. From December through July, they didn’t have any.

“It’s always been streaky,” said Frederick EMT David Losure, “but for it to go that long without—”

“Something was fishy,” Adema added.

They raised the issue with through the proper channels, and something likely changed somewhere along the line, as they received three calls within the next two weeks. “All three calls that we’ve had since then went really well,” Adema said. “So hopefully we’re over that road bump.”

But it’s also possible that one reason they weren’t getting calls is because people weren’t calling — perhaps people on scene figured if they had to wait for the Aberdeen ambulance, they could get the patient to the hospital faster themselves.

Adema says that is a risky decision. First, if that patient is a loved one, the driver might not be in the best state of mind, which could be putting others on the road at risk. Second, medical care actually starts as soon as an EMT gets to the scene, not once the patient gets to the hospital. Sometimes moving a patient could cause much more harm, which EMTs can determine and then take steps to move the patient safely. And even if the main medical issue is a severe one, there are many small ways a patient can have problems that on-site EMTs can treat.

“It’s a pretty big deal to start that chain of care as soon as possible,” Adema said.

And that’s the biggest consequence for rural communities: The loss of an ambulance service in a rural community could mean that a significant part of the “golden hour” is spent waiting for a more-distant ambulance to respond.

If Gackle, N.D., were to lose its ambulance license, people in that area would have to wait anywhere from 30 minutes to an hour for the next closest service to respond.

“This could have devastating effects for someone experiencing severe trauma or life-threatening medical emergencies,” squad manager Melody Owen explains. “Our surrounding services such as Edgeley, Kulm, Medina, and Napoleon are also small services that are operating on a volunteer basis. Adding our coverage area to their area (if Gackle were to shut down) would put additional strains on them as well.”

If Corsica’s ambulance service were no longer functional, that would leave just one ambulance, in Armour, for all of Douglas County, Johnson said.

“If the Armour service was … on a transfer, that means the nearest ambulance would have to come from Parkston, Platte, Wagner or Plankinton—at least 20 miles, or almost a half-hour,” she said. “We are talking about not only your neighbor, your pastor, your teacher—we’re talking about your spouse and your child as well. What if you had to stand and wait for an ambulance for over 20 minutes?”

The third story in the series will discuss some innovative ways that ambulance services in the region are responding to challenges facing their departments. Watch for it on Thursday. See the first story here.

Emergency Medical Technician (EMT)
The EMT licensure is considered the minimum training level for Basic Life Support (BLS) ambulance attendants. Many other occupations utilize the training to augment their services such as athletic trainers, security personnel, law enforcement officers and firefighters. North Dakota utilizes the National Registry of Emergency Medical Technicians (NREMT) certification standards, however an EMT must also hold a ND license in order to legally work within the state. The State Emergency Medical Technician (State EMT) is the North Dakota equivalent of an NREMT. North Dakota may issue State EMT licensure to persons under the age of 18 who do not meet the minimum age requirement for National Registration but have completed all the same requirements necessary to become an NREMT. All of the training, testing, certification, re-certification and licensure requirements are identical to an NREMT.

—provided by Tom Nehring; information from the N.D. Department of Health EMST website

To become an emergency medical technician (EMT) in South Dakota one must possess a high school diploma or equivalent degree, be 18 years old,hold current CPR certification, complete a state approved educational program and pass the National Registry of Emergency Medical Technicians(NREMT) practical & writtencertification exams. The National Registry of Emergency Medical Technicians (NREMT) keeps a current list of all certified andlicensed EMS providers in each state. After passing the required exams the individual is issued a NREMT certification for 2 yearsand a South Dakota certification for 2 years. South Dakota requires EMTs to recertify every two years. (To clarify: there is no South Dakota state EMS exam.)