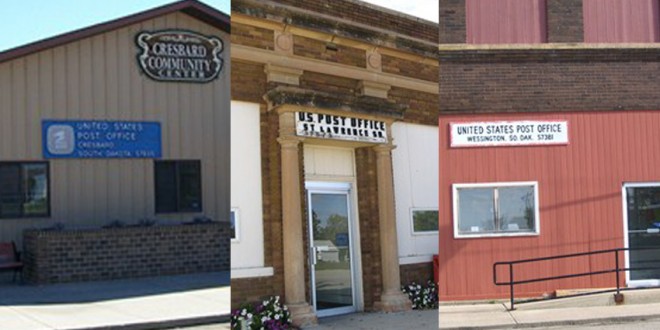 Concern is growing over the budget-slashing POStplan and the potential effects it could have on rural communities in North and South Dakota as thousands of post offices nationwide are targeted for reduced hours or closure.

With the implementation of the POStplan set to begin in a few short months, concerned citizens will finally have a chance to have their say about the effects that the budget cuts will have on their communities.  In coming days and weeks, public meetings will be held at offices facing the prospect of reducing their hours or having to close their doors, so that affected community members can vote, through surveys, on what will happen to their post office.

Fear of loss of service

Despite the USPS’ decision to encourage reducing hours instead of closure for post offices affected by POStplan, many worry that the cuts will still negatively impact the quality of service they receive.  Ranging from inconveniences like having to work a busy schedule around the few hours the post office is open, or having mail and newspapers come a few days later, to major issues like delaying access to important supplies for farms and local businesses, the potential problems that the cuts could cause are numerous and far-reaching.  Even losing home mailbox service altogether is a possibility if a post office closes completely.

The USPS has released information about the upcoming meetings and possible options for communities to try to lay these fears to rest.  Survey letters to patrons in affected areas, sent out last month, explain the options that they can choose for their community, such as reducing window hours, or closing the window while maintaining the office and mailbox delivery service.  The letter also states that it takes a vote of more than 60 percent from a community before a post office will close down.

The reduction in window hours on its own should not change the time it takes to send or receive mail either, Pete Nowacki of USPS Corporate Communications explains.  Reducing window hours only changes the time when services like sending large packages or stamp sales are available, and mailbox and P.O. box services would not be affected.

Nowacki also said that communities have the option of establishing Village Post Offices (VPOs).  A VPO can be established in a local business, can have P.O. boxes, sell stamps, and ship some packages, and can stay open for as many hours a day as the business running it.  By establishing more VPOs across the country, the USPS hopes to be able to maintain convenient service despite budget cuts and reduced post office hours.

With more than 13,000 rural post offices set to be evaluated for reduced hours or closure, the USPS doesn’t plan to try to handle every community’s case at once.  Instead, Nowacki says, offices where the postmaster has left or retired will be the first to see changes from the POStplan cuts, with the other offices in consideration to follow.

The first wave of post offices going through the process of reducing their services will have meetings as soon as the end of October.  At these meetings, USPS officials will answer questions, collect survey letters, and leave surveys for those who do not bring letters, but still wish to vote on how their office will be affected.  Roughly a week afterward, the results of the meeting and survey will be posted at the post office.  The cuts that are chosen will not take place until at least one month after the results are posted, and no changes will be implemented during the holidays (between Dec. 1st and Jan. 12th).

Still, the USPS plans on taking an average of only 90 days to reduce services in a community after sending out survey letters to its members, evaluating and making cuts at all of the target post offices across the country over the course of two years.

Currently, six communities in the the Dakotafire region have meetings in October, though as the POStplan implementation continues, more post offices may also be forced to reduce services.

The immediately affected communities and meeting times and places are:

Many more post offices are on the list of possible reduction in hours, so meetings in those communities may be held later. See earlier Dakotafire stories about proposed USPS changes here, here and here.

Ryan Clay is a freelance writer from Aberdeen, S.D.