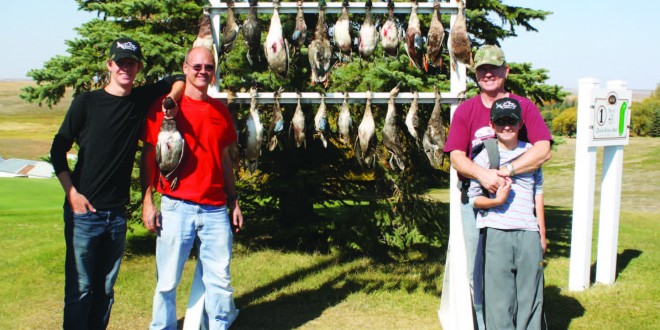 The weather was a little too good for the annual duck hunting competition in Gackle, N.D., known as Duckfest.

Of the thirty four-man teams of hunters who competed in the event Sept. 28-29, only six teams brought in their full limit of ducks.

“It was a tough year for the hunters,” said Duckfest organizer Jay Haut. “We had too much sun, not enough clouds and wind, and temps in the 80s. We all should have went fishing!”

Besides the weather, the event was a success, Haut said.

The events kicked off Sept. 28 at the Duckfest Headquarters (Gackle Legion Hall) for registration and slough assignments. Competitors prepared themselves with a chili feed and took a gander at the prizes before the rules meeting and a question-and-answer session with the North Dakota Game & Fish.

The hunting began a half-hour before sunrise Sept. 29 with all teams heading back for bird check-in by 1 p.m. The first team checked in at 9:30 a.m.: Team #24, Captain Pat Walter.

The day’s activities didn’t end with bird check-in. After the hunt, teams were able to play in a golf tourney and also take part in an Annie Oakley-style fun shoot at the Gackle Golf Course. With the bird points determined by rolling of the dice, the teams and land owners gathered at the Legion Hall for a banquet and prizes announcements Saturday evening.

Fifteen different species were shot this year with a total of 443 ducks by 120 hunters.