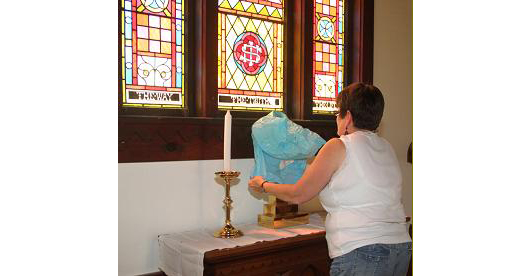 Carol White covers up the cross and candles on the altar of Trinity Episcopal Church in Groton, S.D. Photo by Groton Independent

Above: Carol White covers up the cross and candles on the altar of Trinity Episcopal Church in Groton, S.D. Photo by Groton Independent

From the Groton Independent

Declining membership and lack of workers in the Brown County Historical Society have put the future of the Trinity Episcopal Church in Groton in limbo.

“Our goal is to find an organization or entity that would be willing to partner with the society to see to the use and care of the church,” Brown County Historical Society President Sherri Rawstern said. “We
need to make provisions for the future needs of the church in order to preserve the church of another 100 years.”

Members of the society admitted that there had been a lack of communication with the City of Groton.

“We had talked to members of the (City) Council singularly in the past,” Rawstern said. “It was also reported to us verbally that there was no interest in Groton.”

When asked why they had never brought the concern before the whole City Council to inform the public of the situation, Rawstern stated that a mistake had been made.

“We all make mistakes,” Rawstern said. “This was a lack on our part.”

After being informed that the Groton City Council was meeting on Monday evening and that the church had been placed on the agenda, Rawstern stated that she would be happy to attend the meeting.
Among the 15 or so people attending the meeting was Groton City Mayor Roy Olson. “While it would be wonderful to keep the church here, we already have enough on our plate to take care of,” Olson said.

Several ideas were presented during the meeting to help keep the church in Groton. One possibility is forming a group of Groton residents that would be a subcommittee of the historical society. They would host events at the church and see to the maintenance.

There is no set timetable in place by the society to transfer the ownership of the church; the Society will not have a business meeting until January. They only have one business meeting a year, the rest of the meetings are program meetings.

The fate of this landmark is now up to Groton residents, who will have to decide if they have the desire and the means to keep a piece of their history in their town.