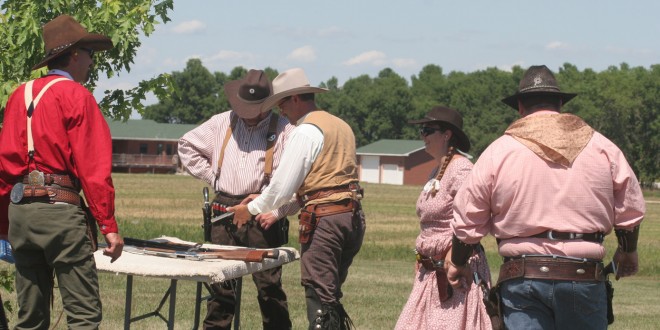 Participants get ready for the next round at Cowboy Action Shooting in Clark, S.D. Photo by Clark County Courier

Aiming to be quick on the draw at Cowboy Action Shooting in Clark, S.D.

From the Clark County Courier

Cowboy Action Shooting is held the second Sunday of each month April through October on the range just north of David and Leanne Warren’s residence, a mile north of Clark.

About 15 to 20 shooters spend one Sunday afternoon a month hitting targets of varying distances with different type guns, in a timed sequence dressed in wild West garb. The action in Clark is affiliated with the Single Action Shooting Society, which, according to its website, is “an international organization created to preserve and promote the sport of Cowboy Action Shooting.”

Each participant is required to adopt a shooting alias appropriate to a character or profession of the late 19th century, a Hollywood western star, or an appropriate character from fiction. Their costume is then developed accordingly. Many event participants gain more enjoyment from the costuming aspect of our sport than from the shooting competition, itself.

In this photo, participants are reloading their guns, getting ready for the next stage of the event. From left to right are “Dakota Nailbender” (Dave Warren), “Ironmender” (Jason Hanson of Pierre), “Dakota Woodbutcher” (Evan Fletcher), “Pistol Crystol” (Crystal Hanson of Pierre) and “Jailmaker” (Garrett Maas of Huron).