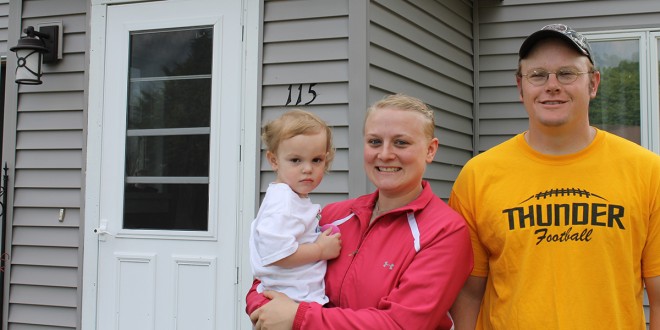 Adam and Daphne Schlepp, holding their daughter, Shelby, spent two years looking for a house in Kulm before they found one. Photo by Sarah Gackle

Adam and Daphne Schlepp, holding their daughter, Shelby, spent two years looking for a house in Kulm before they found one. Photo by Sarah Gackle

Kulm is a town of 354 people with 248 housing units, according to the 2010 census, which seems sufficient for the population. But elementary school class sizes—an indicator of population trends in a community—are growing in Kulm. Several 30-somethings have moved “back home,” and more are exploring the possibility, but they haven’t been able to find places to live.

When it comes to housing, many would-be Kulm residents are finding non-residents literally hold the keys to their future. 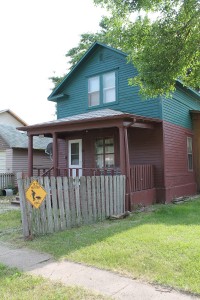 The fact that many "hunter houses" like this one in Kulm aren't available for new families has made it difficult for some potential new residents to find places to live in the N.D. community. Photo by Sarah Gackle

Most of these non-resident owners are hunters who purchased homes decades ago when word started getting out about Kulm’s excellent pheasant hunting. Linda Hehr, a local resident and business owner, manages 14 “hunter houses” in Kulm. She works with a few other women to clean houses between stays, and her husband, John, keeps up the yards. She estimated that in 2011 more than 1,200 people were in and out of the houses, but not just for hunting.

“September through December is definitely the high time, but they get used throughout the year for family reunions, funerals, weddings, really anything,” Hehr said. “If people need a place to stay and the hotel is booked, they know they can call me.”

The swell of activity during hunting season and the availability of rental space for other events is a boost to Kulm’s economy. The city also benefits from hunter-owners, who are generally diligent in keeping up the homes and sometimes even invest in significant improvements and renovations. Some of the homes stood empty for years before being purchased by non-residents.

But lately, the housing market has shifted, and now more young families are looking for homes in Kulm, only to find an almost complete lack of availability.

Adam and Daphne Schlepp are both employed by the Kulm school system. For two years, they looked for a home to purchase. They have a toddler and want to build a family in Kulm, but first they had to find a place to live. For a while, they considered moving out of town. If they had, Kulm would have lost a young family and two teachers.

“We really love it here, and we want to stay,” Daphne said. “We just dug in our heels and crossed our fingers, hoping something would open up.”

Eventually, something did: Another young couple that had been holding on to a house in hopes of making the move back to Kulm someday let it go to the Schlepps, since the Schlepps’ need was more immediate. But that just kicked the can down the road, since this other couple also wants a home in Kulm eventually.

Building a home is often not an option. Some vacant lots are also owned by non-residents who are not willing to let go of the properties or are simply unreachable. The city is currently looking for a lot to erect a second four-plex housing unit, without any luck. All the units in the first four-plex they built were spoken for well before it was finished, and they have six tenants on a waiting list.

“Many of those on the waiting list own nice homes, and that would open up good houses for new residents and families,” said Dale Gackle, a Kulm city council member. “But we can’t get it built yet.”