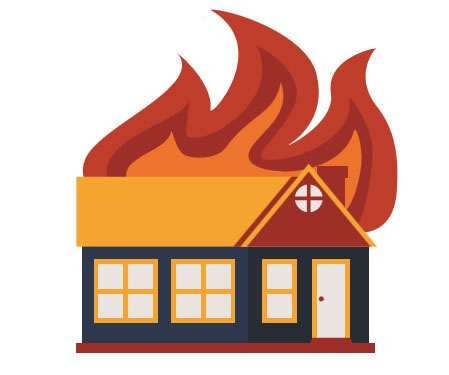 Has your chimney been cleaned this year?

Some rural Dakotans have recently taken to burning corn, pellets and wood to avoid burning as much cash for home heating expenses, but doing so must be done responsibly, according to fire officials.

“The main thing is to make sure that whatever heating source you’re using that it’s appropriate for the use or the application, area, building or home,” said South Dakota State Fire Marshal Paul Merriman.

In 2013, the 18 South Dakota fires reported as originating in chimneys or flues made up 58 percent of the total 31 fires attributed to heating sources and more than 400 “man hours” were spent on the scenes of those fires, according to the National Fire Incident Reporting System, or NFIRS. Heating source fires accounted for less than one percent of the total 2,440 fires in the state in 2013. Representatives of the North Dakota fire marshal’s office declined to provide data, due to staffing shortages during the legislative session late last month.

Frederick (S.D.) Fire Chief Kevin Barton said that, for the most part, prevention is obvious.

“The Frederick fire department has responded to three house fires this year–one due to natural causes, (and) the other two have been chimney fires these have been caused by the neglect of cleaning the chimneys,” he said. ” The fire code is clear: ‘Chimneys and fireplaces must be inspected at least once a year: for soundness, freedom from creosote deposits, and shall be cleaned as necessary!’ … It’s down-right dangerous not to have your chimney cleaned and inspected regularly.”

“You can’t totally prevent a chimney or flue fire—or really any fire—but if you take (certain) steps, you lessen those chances by a huge percentage,” said Merriman.

The biggest step in preventing a chimney fire is maintenance.

“At least on an annual basis, make sure you’re having those appliances inspected by somebody in the heating and cooling profession, so you have at least a reasonable level of confidence that those appliances are working correctly,” said Merriman.

“It really wasn’t (a) big fire,” he said, adding that “the worst was over by the time we got there.”

Berreth said the fire in the newly installed wood-burning stove was the result of creosote buildup in the chimney and resulted in no physical damage to the structure of the home and no injuries, but that the home had filled with smoke.

Both of Frederick’s fires related to wood-burning heating systems so far this heating season were caught early enough that damage was mostly isolated to the stove and chimney area.

Groton, S.D., fire chief Tom Tietz has been on his community’s fire department for the past 15 years and never seen a chimney or flue fire, but said they often are the result of lack of proper cleaning. 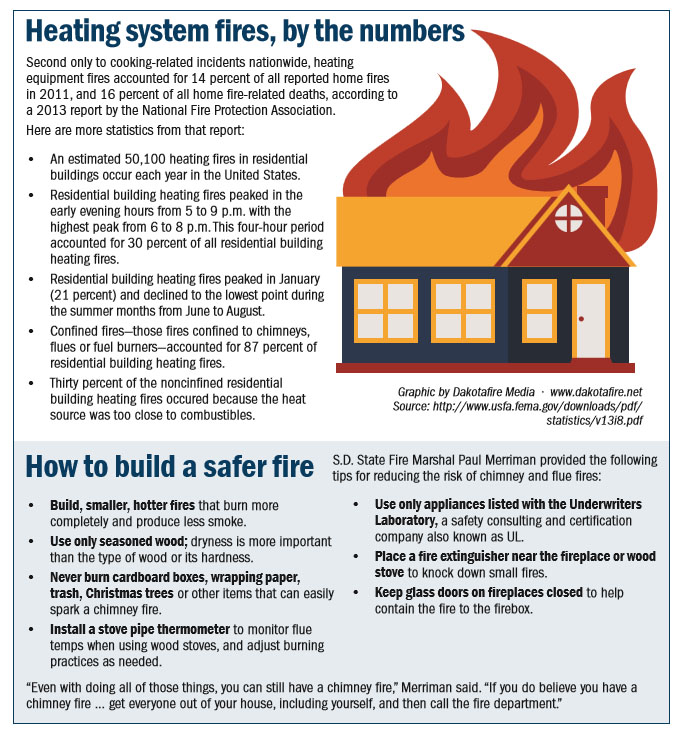 Clean the chimney, and know what to burn

“Those chimneys have got to be cleaned—especially the round pipe ones,” he said. “(Creosote) gets built up inside the chimney, and when you get it too hot, it starts on fire.”

According to a 2013 report by the National Fire Protection Association, “Creosote is a sticky, oily, combustible substance created when wood does not burn completely. It rises into the chimney as a liquid and deposits on the chimney wall.”

Based on 2011 figures, the NFPA estimates that the chimney or flue fires account for 25 percent of all home heating fires annually and cause an average of “four civilian deaths, 15 civilian injuries and $34 million in direct property damage.”

In Ellendale, N.D., where fire chief Paul Weddell said a chimney or flue fire has not been reported in the past decade, unattended space heaters and overloaded circuits are a bigger concern.

Merriman added that proper use of wood, pellet, corn and other “burn” heaters also is important.

“A lot of chimney fires, I think, occur because of using improper types of wood or burning different products in the fireplace, that burn hotter than normal, which in turn could ignite deposits within the chimney,” he said. “I realize a lot of fireplaces and such are older, but whenever you can … make sure you’re following the manufacturer’s recommendations for use if you have them handy. Whenever you have any doubts, I recommend bringing a heating and cooling professional in to inspect the entire system … and make any necessary repairs right away.”

In addition to fire prevention, Merriman said proper maintenance of chimneys and flues can prevent other hazards.

“(Then) you don’t have any carbon monoxide issues as well as potential fire issues,” he said. “If that chimney isn’t sealed properly and you have some unburned or burned product getting back in through cracks in the chimney or that aren’t making it out of the chimney, we aren’t just talking about fires. There’s a good chance of carbon monoxide getting back into the home.”

Save the DIY for something safer

As a rule of thumb, the state fire marshal’s office does not recommend chimney and flue maintenance and inspection be a “do it yourself” project.

“Every home is different, and every appliance is different. Because of that, you run into all kinds of constructions types, different obstacles, as far as installation, so you’re much better off having a pro do it,” said Merriman.

Fires inside the home are possible when using fireplaces for heat, too.

“You should really keep (the doors) closed while it’s in operation. The glass gets hot, but it … lessens the chance of an ember being able to pop and come out, which would cause an issue on the inside of your home as well,” Merriman said, adding that doing so can decrease the amount of heat let into the house, however, and defeat other purposes for fires within the home.

“One of the main reasons for the fireplace is probably not so much heat, but the (ambiance), so some people may rather have them open,” he said.

In the event of a malfunction, Merriman said it is best to be safe than sorry.

“If you ever have any concerns about the operation, be sure you call in a technician who can help you out,” he said.  “Homes are replaceable, but lives are not. … It’s (most) important that you get out as fast as you can. … There are some things that you can do—use a fire extinguisher, keep the glass doors closed and shut the inlets on a wood stove—but really we just want folks to think about getting out and calling 911.”

The Chimney Safety Institute of America (CSIA) is dedicated to chimney and venting system safety and to the elimination of residential chimney fires, carbon monoxide intrusion and other chimney related hazards that result in the loss of lives and property. CSIA devotes its resources to educating the public, chimney service professionals and the insurance industry about the prevention and correction of chimney and venting systems hazards. – See more at: http://www.csia.org/media/Statistics_Chimney_Fires_Carbon_Monoxide.aspx#.dpufi
chimney creosote Ellendale fire Frederick Groton marshal slider 2015-02-03
Wendy Royston
Share !
Previous: Programs provide heating help to thousands
Next: Tending the flame: Leveraging resources to bring back South Dakotans
Scroll To Top