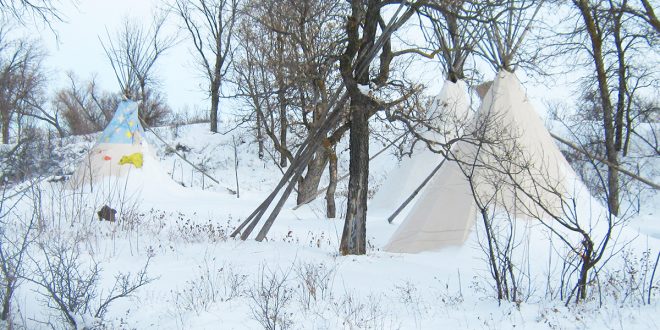 Three tipis sit camouflaged by trees and snow at the Lakota winter camp held by the Cloud Horse Art Institute on Pine Ridge Reservation. These camps, led by Tilda Long Soldier St. Pierre and her husband, Mark, offered native youth a firsthand understanding of their ancestors’ experience of winter life, including astronomy, biology, cooking, games and storytelling. The camp was most recently held in 2010. Photo by Mark St. Pierre

Winter weather was just as extreme on the prairie before European settlers arrived. Preparing for it was part of the daily existence of the prairie’s original inhabitants.

In the 1800s, Native American tribes of the Midwest stayed fairly local year-round, unlike today’s “snowbirds,” who “fly away” to warmer southern climates for the winter months. They followed a strict calendar governed entirely by the seasons. The Dakota and Ojibwe peoples began preparing in earnest for winter each September.

“They would harvest and dry corn, berries, meat, fish, whatever meat they had in the area, and store it underground,” according to Professor Lorraine Grey Bear, Dakota language instructor at Cankdeska Cikana Community College in Ft. Totten, N.D.

That method of food preservation apparently was effective, Grey Bear said, recounting the story of a 1980s farmer who pulled a stump from a field and found a strange package in the roots. Lab analysis revealed it was a still-edible, 100-year-old buffalo pemmican, or dried buffalo meat mixed with fat.

After storing away food for the winter, tribes settled into their “winter homes”—traditional tipis, but in areas of more natural protection from the elements, and nearby sources of water and firewood. The top of the tipi had a hole in the buckskin lined with a dew cloth to keep in moisture. Two long sticks attached to another piece of buckskin could be adjusted to let out more or less heat.

The men continued to hunt until January, which was termed “‘Wipehi Wi,’ which means ‘a difficult month for survival,’” according to Grey Bear. This was the month when the men returned and everyone hunkered down and took up beadwork and other artistic and useful chores around the fire in the tipi. Gathering together indoors was a natural extension of the Native American community-based culture that prized collaboration and cohesion as a tribe.

The native people knew the winter season would eventually pass. Signs of spring brought new opportunity to plan ahead for the next winter, while rejoicing in the warmer moments outdoors. The men would collect the thick winter coats of animals coming out of hibernation, while young children picked off squirrels and birds as the excitement for warm weather began to build.

2017-01-19
Sarah Gackle
Share !
Previous: The gift in the heavens
Next: Reveling in winter: These South Dakotans don’t let winter keep them from enjoying the great outdoors
Scroll To Top