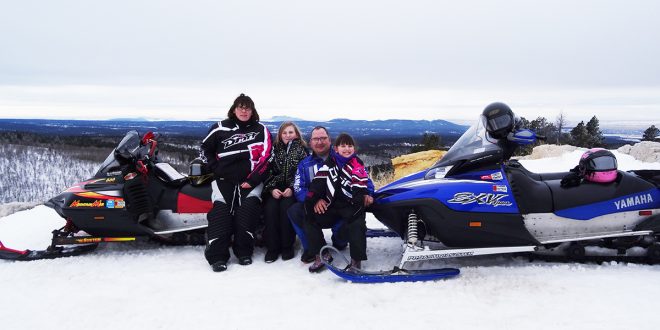 Snowmobiling and other winter activities have become a family tradition for the Juhnke family of Parkston, S.D.—parents Nicole and Jason, and children Cadence, 12, and Rory, 9. Courtesy photo

Reveling in winter: These South Dakotans don’t let winter keep them from enjoying the great outdoors

Though many dread the long, cold winter months in the Dakotas, the thrill of adventure lights a fire for others.

“Winter comes and people tend to hibernate. That’s sad. It really is. There (are) so many fun things you can do outside,” winter-lover Nicole Juhnke of Parkston, S.D., said. “If you dress properly, and prepare for your day, you can have more fun in the winter than you can in the summer.”

For the love of cold and snowy places 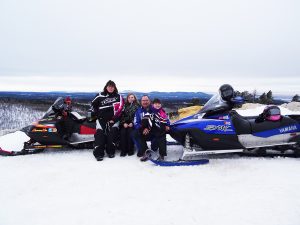 Snowmobiling and other winter activities have become a family tradition for the Juhnke family of Parkston, S.D.—parents Nicole and Jason, and children Cadence, 12, and Rory, 9.
Courtesy photo

Juhnke loves the winter season, and she is using it to create lasting memories with her two daughters.

“I’d like to think it’s grounding my kids a little bit, as far as giving them something that isn’t material,” Juhnke said. “I want them to appreciate the people around them instead of the stuff around them.”

Juhnke has always loved being outdoors, but her love for snowmobiling and camping grew along with her love for her husband, Jason. The couple fosters an appreciation for those activities, as well as ice skating, snow play and outdoor sports, in their daughters, Cadence, 12, and Rory, 9.

“Now I would have a really hard time giving any of that stuff up, and I think my kids would too, actually,” the Burke, S.D., native said. “I love when it snows at night and you’re the first ones out on the trail, because everything is so untouched.”

In order to keep her family safe and warm, Juhnke invests in quality snowmobile gear.

“It’s expensive to buy snowmobile gear and heavy duty winter gear for everybody, but if you’re cold, then you’re miserable, and you’re not having fun out there,” she said.

Jason Juhnke, vice president of the Dakota Ditch Rippers snowmobile club in Parkston, and family also offer snowmobile rides to their daughters’ friends and other community members. In addition to spreading the love of snowmobiling, the family likes to bond with other avid snowmobilers, both East River and in the Black Hills.

And, as much as they love Dakota winters, the Juhnkes yearn for a place even colder. Juhnke discovered her passion for Alaska while searching for a college internship in 1998. Since her first visit, she has returned several  times and plans to take her daughters next year. “It is unbelievably beautiful,” she said. “My eyes hurt half way through the day, because there is so much to see.” 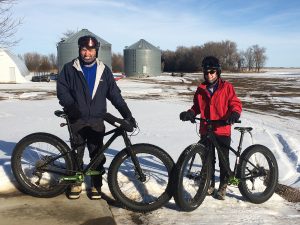 John and Marci O’Connell of Letcher, S.D., don’t let winter weather put a freeze on their favorite pastime. With a variety of bikes and other weather-appropriate gear, the couple continues to ride long distances, even in heavy snow.
Courtesy photo

Though she’s been known to bike tens—or even hundreds—of miles in a single ride, Marci O’Connell is not setting out to make any two-wheeled distance records.

“I just try to stay young. I’ve been blessed with my health and I’ve just tried to keep it that way,” the Letcher, S.D., woman said. “Bicycling really offers me that avenue.”

O’Connell and husband, John, regularly ride 18-20 miles, but sometimes that’s just their warmup. The runway for their crop-dusting business doubles as a casual biking course, and has been known to be the place where the couple introduces friends to the sport.

“You can get places,” said O’Connell, who transitioned from running to biking due to a knee injury more than 30 years ago. “You feel a sense of accomplishment when you do long distances.”

Now, biking has become an integral part of her life.

“It can be really cold” riding in the wintertime, she said, “but it’s beautiful in the evening, with the moon shining and if there is snow on the ground.”

The couple has specialty bikes for various conditions, including “fat tire” bikes specifically meant for riding in snow and other difficult terrain.

“In the fall and winter months … we ride the gravel roads, overtop of the snow and through the roads that even aren’t open normally” on those bikes, O’Connell said.

But on cold, winter nights, shorter rides are advisable.

“You have to be careful and layer for the weather,” she said. “Protect yourself of course from frostbite.”

O’Connell admits she may look silly riding bike in snow boots, ski gear, ski goggles and a ski helmet, but she also is warm.

Walking in any weather 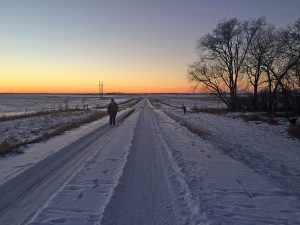 Annikki Marttila walks along the gravel road near her Frederick, S.D., home nearly every day. Here, she walks as her grandson skis in the ditch to the right. Photo by Heidi Marttila-Losure

Annikki Marttila, who has made the Frederick, S.D., area her home for the past 40 years, doesn’t allow the variable Dakota weather to prevent her from getting a two-mile walk in every day.

“Since I grew up (in Finland), my attitude toward winter is say ‘yes,’” said Marttila, who turns 80 in December. “Every day of the year, I go outside, but sometimes Dakota weather is so bad that it’s impossible” to walk a considerable distance.

“Winter is coming, and I am looking to keep up with my walking every day until snow comes,” she said.

Marttila also enjoys skiing. She logged 295 cross-country miles one winter, which can be difficult to do in the Dakotas, where good skiing snow is rare, due to frequent winds. 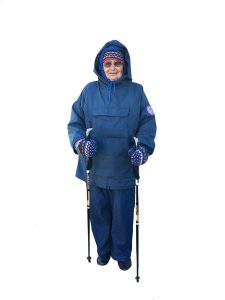 Annikki Marttila walks every day no matter what the weather. Her Nordic walking sticks are part of her gear. Photo by Heidi Marttila-Losure

On the days when walking outdoors is too dangerous, Marttila achieves her two-mile goal inside, using the FitBit she purchased in March to track her steps. Prior to her FitBit she would keep track of her miles for the year in a notebook.

Marttila’s “walking gear” includes dressing in layers, sometimes putting several sweatshirts under the wind-resistant anorak she made for herself years ago. She also wears a homemade wool hat and hand-knit mittens.

The final pieces of gear are her Nordic walking sticks. They are very popular in Finland; studies suggest they increase the calories burned while walking, and they provide some stability for those with balance concerns.

There is a Finnish saying that Marttila says is commonly accepted among the people of her native country: “Every weather is outdoor weather.”

“I am very much believing of that,” she said.

“I think I am healthier than most people my age since I can walk without any problem for many miles.”

2017-01-19
Kathryn Clayton
Share !
Previous: Winter was part of the rhythm of life on the prairie for tribes in the 1800s
Next: Despite chill in the air, winter sun warms the soul
Scroll To Top