Where does the farm bill money go?

The massive package of legislation about food and farming commonly known as the farm bill (this year it’s officially called the Agriculture Reform, Food and Jobs Act of 2012) is being debated in the U.S. Congress this summer; it may in fact have already made it to the Senate floor by the time you are reading this, although passage of the bill will likely inch close to the expiration of the current farm bill on September 30. 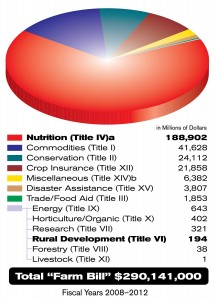 The cost of the 2008 farm bill for five years (FY2008-FY2012) was estimated to be about $283 billion, but will actually be closer to $420 billion, due mostly to vastly higher-than-anticipated spending on the Supplemental Nutrition Assistance Program (SNAP). Subsidies for commodities like corn and cotton make far more of the headlines, but if you look at where the money goes, nutrition programs (including SNAP, but also the school lunch program and WIC) get by far the largest portion of the farm bill budget.

Of the money allotted to nutrition, the majority goes to the SNAP, commonly known as food stamps.

This makes SNAP a target for spending reductions, but that would affect a broad segment of the American public: One in seven Americans (46.3 million people as of February 2012, nearly half of them children) receives SNAP assistance. The number has more than doubled in the last decade. In South Dakota, about one in eight people (about 104,000) receives SNAP assistance; in North Dakota, about one in 10 people (59,000) participate.

All of the programs that fit under the umbrella of USDA Rural Development make up a minute fraction of the whole farm bill budget picture. Rural development also is not one of the lucky expenditures that has won mandatory spending in the legislative process, so whatever money it gets is subject to authorization by Congress each year. Chuck Hassebrook, on-leave executive director of the Center for Rural Affairs, points out that spending on rural development has fallen by a third since 2003. Hassebrook argues that this reflects a greater disordering of our priorities.

“A 2007 Center for Rural Affairs study found that USDA spent more than one and a half times as much to subsidize the 20 largest farms in South Dakota as it invested in rural development programs to create economic opportunity for the 80,000 people and 66 towns in the 20 rural South Dakota counties suffering the worst population loss,” Hassebrook wrote in an e-mail.

The Center for Rural Affairs is lobbying for the inclusion of a Community Prosperity Fund in the 2012 farm bill that would have in it $50 million a year from which funding for various rural development programs would be drawn. This is comparable to funding in recent farm bills for rural development programs, but by establishing a common fund, the program would meet the minimum amount required to be included in the budget baseline for future farm bill legislation.

This means that rural development advocates wouldn’t have to fight every five years to carve a new sliver out of the farm bill pie.