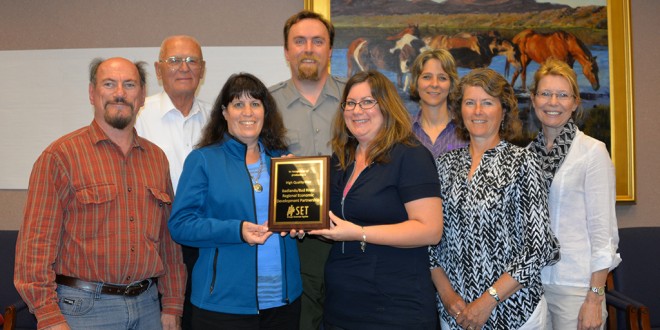 Want to do something grand? You’re going to need a grand plan.

That’s the idea behind the Stronger Economies Together (SET) program, which helps multi-county regions create high-quality plans for collaboration that improve their economies.

“Towns are realizing that they can’t all do everything,” said Marion Houn, special projects coordinator with U.S. Department of Agriculture – Rural Development in North Dakota. “This allows them to share expertise with each other.”

The program has a strategy that organizers say results in plans that are likely not only to work, but also—perhaps more importantly—are very likely be put into action, unlike some planning processes that end up with a thick three-ring binder gathering dust on a shelf.

USDA Rural Development started developing the SET program in 2010 to encourage counties to get together to do economic development work based on their strengths, which is more likely to be successful in the face of global competition.

SET itself is a collaboration: USDA Rural Development staff team up with other partners to do the work. In the Dakotas, those partners are the Extension services of the two states. Better partnerships between the organizers have proved to be a side benefit of the process, according to Christine Sorensen, Midwest regional community economic development coordinator of USDA Rural Development, who helped get the SET program going in South Dakota three years ago.

“Our relationship (with Extension staff) has increased in all other areas,” Sorensen said.

SET has now reached 70 regions in 31 states. Nationwide, five SET regions have developed plans that have been deemed high quality by USDA reviewers, which means that when organizations apply for funding to develop parts of that plan, their projects score more highly in the granting process, and they can access money set aside for these kinds of projects.

Sorensen is proud that one of those high-quality plans was developed in South Dakota, in the Badlands/Bad River Region. Their plan aims to build on “agriculturally based businesses, natural resources, and small businesses utilizing modern technology,” according to the plan document.

Here’s a summary of key steps in the SET process:

A region of two or three counties works best, said Sorensen, who presented via web conference at the Prairie Idea Exchange. She’s learned this in the time that the SET program has been active in South Dakota. Some of the initial SET regions were five or six counties, but that covers a lot of land area and results in many hours driving between meeting locations. That makes it harder to get people together and limits the relationship-building and learning conversations that are crucial for the project to succeed.

Houn said that what worked for the Tri-County Region in North Dakota was building on a relationship that was already in place. The three counties of McIntosh, Logan and Emmons had already been working together in other ways, including with tourism efforts based on their “Germans from Russia” heritage. They were also similar in other ways, such as demography and their ag-based industries.

Some of the SET regions have paid staff, but not all of them. “It was more important that we could identify champions who were going to carry” the plan all the way through the initial writing process and into implementation, Sorensen said.

The group that gathers to do the work of the project needs to represent the regional community.

“We’re not meeting with the same five people in the same town every month,” Houn said, which would be a recipe for a plan that is never put into action.

And those around the table have to be dedicated.

“You really have to have complete buy-in,” Sorensen said.

They also need to be willing to consider new possibilities with what Sorensen called an appreciative inquiry mindset. “We know where we’ve been, but what can we do better together?” she said. “It has to be fertile ground. People have to … come in with an open mind.”

Check the data and find your assets.

An important part of the SET program is the partnership with Purdue University, which provides participants with rich, useful data specific to the region they have defined, Sorensen said.

From that data, SET team members mapped out their communities’ assets—a key strategy in the SET program. “We look at what is already strong and what (SET regions) can build upon,” Houn said. 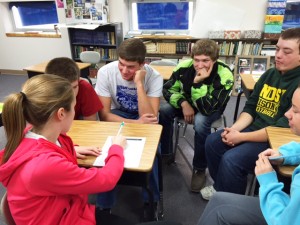 Napoleon High School students discussed their place in their community during a civic forum as part of the SET program. Contributed Photo

Test assumptions with the people.

Community gatherings called “civic forums” are a key part of the program, according to Houn. The Tri-County Region has a forum each month, within each county. The location changes each time, and “We don’t decide what the program is going to do—the citizens decide,” she said.

The data from Purdue can help feed the discussion. For example, it showed that there was no formal childcare in any of the three counties in the Tri-County region. This showed the potential for new business, which community members could discuss more constructively because of the data that showed the need for it.

Another civic forum with youth at Napoleon High School was a big success, Houn said.

“They liked being rural because it has the values that are important to them. Once they get to the middle of West Fargo, things just aren’t the same,” she said. But they also said they don’t see a future for themselves in their town. The forum gave them a chance to voice that idea, and also perhaps some ideas of how to change it.

Once the plan is in place, USDA and Extension staff help the regions connect with resources, including funding, to help make their plans a reality.

Houn said she’s encountered few stumbling blocks in getting the program off the ground.

“People are enthusiastic,” she said. “People want to better their towns and their future.”

development PIE Prairie Idea Exchange Whats Possible 2016-01-09
Heidi Marttila-Losure
Share !
Previous: From the Editor: Success depends on ‘where the heart is’
Next: From the Editor: Building confidence
Scroll To Top