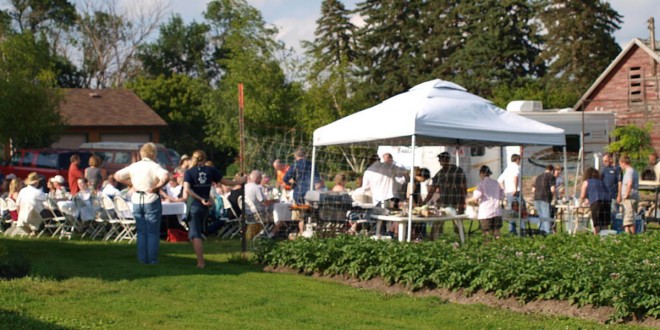 Thanks to one local foods project, the consumer and the grower are literally seated at the same table.

“It’s very good for people to meet their producer, see where their food comes from, and have a personal relationship with the person who produces a lot of their food,” said Joan Williams of Cider Hill Farm in Arlington, S.D.

HarvesTable began in 2010, after Williams’s husband, Gordon, saw a similar project online. The couple, who at the time were raising livestock and produce and selling handmade cheeses and breads, contacted two friends, a chef and a gardener, and the group has organized a few events each year since.

“The whole idea is to acquaint people and get them familiar with where their food comes from,” Williams said.

The seven- to nine-course meal is made solely of local foods and served outdoors with table linens, china and wine glasses. A staff of three to seven people prepares the venue and serves the meal to groups of 25 to 80 diners on some of the 12 participating farms throughout the summer.

“We feed everyone at big, long tables, so you don’t know who you’re going to sit by,” Williams said. “You meet people, and there is a lot of conversation that’s really pretty interesting. … It’s nothing like going to a restaurant—where you go and eat by yourself—to go and share a communal feast with people you don’t know is really quite different. It is a little bit of a throwback.”

In re-creating the harvest table atmosphere of yesteryear, the “handshake and a smile” feel of the food sales of days gone by has returned, too.

“There’s a trusting relationship that develops that you’re not going to get with the food that you buy at the grocery store,” Williams said. “People can tour the gardens when they come. They can look around before we eat, and then they can sit there and they feel good about where their food is coming from, because they can see it right there.”

A majority of HarvesTable’s customers are not directly related to farms, but are concerned with consuming locally grown, healthy foods.

“Most of them live in town, and maybe are far removed from agriculture or the rural roots of their ancestors,” Williams said, but “they aren’t naive. They’re at the market buying food because they want fresh food … and they get kind of a kick out of coming back to the farm and seeing how things are done these days.”

Many people are surprised by what the events offer, according to Williams.

“I think a lot of people kind of expect, more or less, a picnic, or a potluck,” she said, but she and/or chef John Gilbertson carefully tailor a unique menu from fresh, local ingredients. “At Linda’s (Gardens), I’ve seen him go out to the garden with a basket and (fill it with seasonal produce) and come and make something with it.”