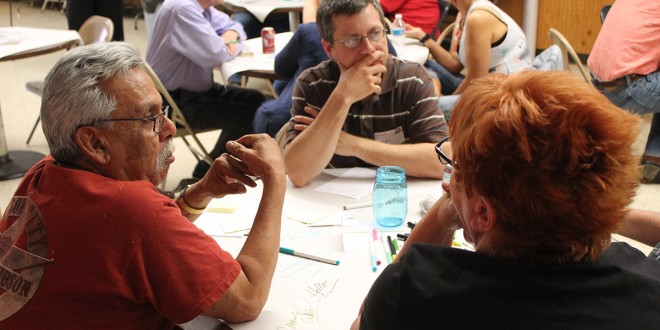 Almost all 22 Arlington residents in attendance at the Dakotafire Café held there to discuss visions of a “wildly successful Main Street” May 27 thought a coffee shop would be successful on the city’s Main Street, even though coffee can be purchased at a variety of other local businesses and eateries.

“You’re looking at a different clientele of coffee drinkers, rather than … the morning coffee drinkers who go to their favorite place here in town and sit for a few hours and talk,” one participant said, suggesting the shop should carry “fancier” coffee drinks, such as lattes and cappuccinos, ground coffee beans, sandwiches and books, and offer WiFi access, sofas and soft music.

Another attendee agreed that a coffee shop would help fill what he described as “a few holes on our Main Street.”

Other needs identified by residents of Arlington during the gathering included a larger community room, a computer repair business and a handyman.

Current trends in Arlington include an apparent “evacuation” of businesses from Main Street, including the grocery and hardware stores and the city offices.

“They’re not gone; they’re just not on Main Street,” another resident said.

Participants also indicated business hours at many local shops are not convenient for local patrons.

Building a destination together 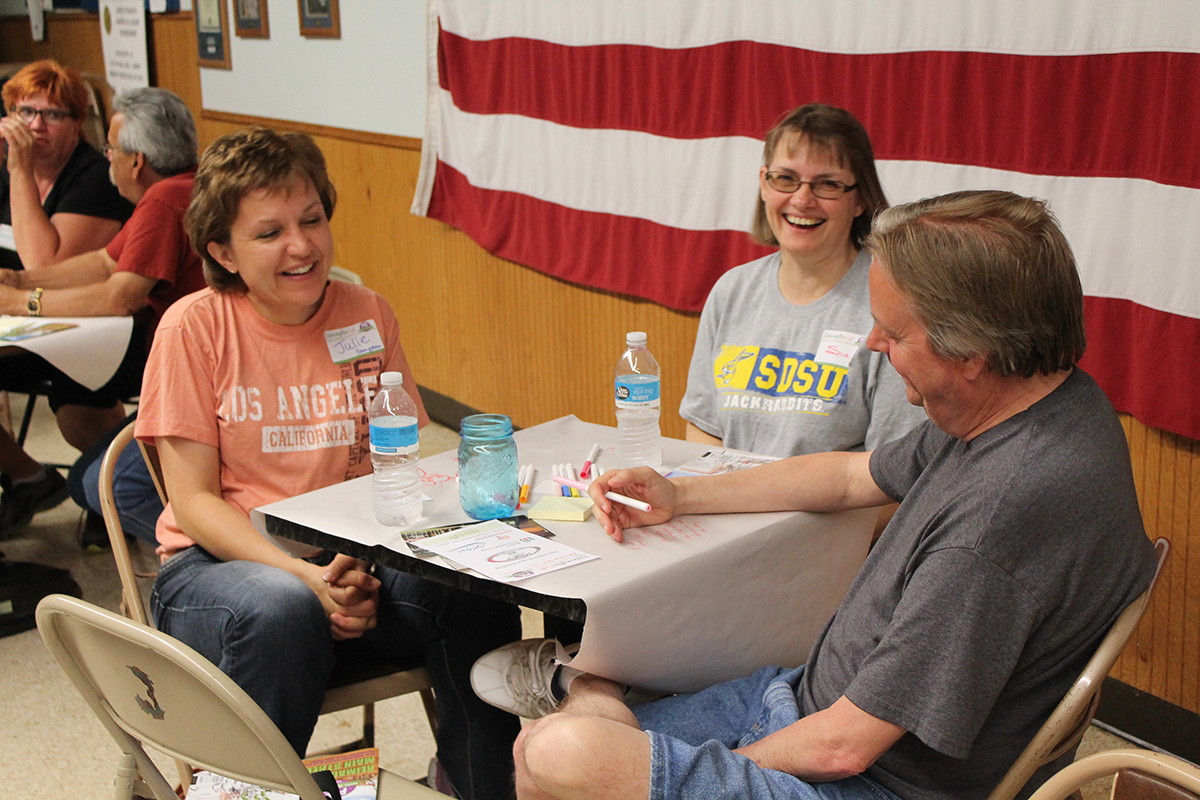 Participants share some smiles and good conversation at the Dakotafire Café in Arlington on May 27. Photos by Jason Uphoff

Also during the gathering, three local shop owners—Gaylene Christensen, Betsy Lingbeck and Randy Bullis, who were featured in the May/June edition of Dakotafire magazine, which focused on “Reimagining Main Street”—spoke about the evolution of their businesses in Arlington, and how they work together cooperatively to make Arlington a destination for antiques and other décor.

Each refers his or her customers to the others, and they have little “bits” of the other businesses in their own shops. For example, Chistensen has an oil diffuser in her business, The Prairie Porch, that attracts a lot of attention.

“I always tell them, ‘You have to go down to Flowers by Betsy!’” she said. “They’ve usually already been to (Bullis’s shop, Bits of Yesterday).”

A sign by the door at The Prairie Porch asks customers, “Have you been to … ?” and lists a handful of local businesses.

“It’s a great working relationship, because we can have people come into town, and they stay an hour or two and go through all of the shops,” Bullis said.

“It’s unbelievable how many people come to Arlington for antiques,” Christensen added. 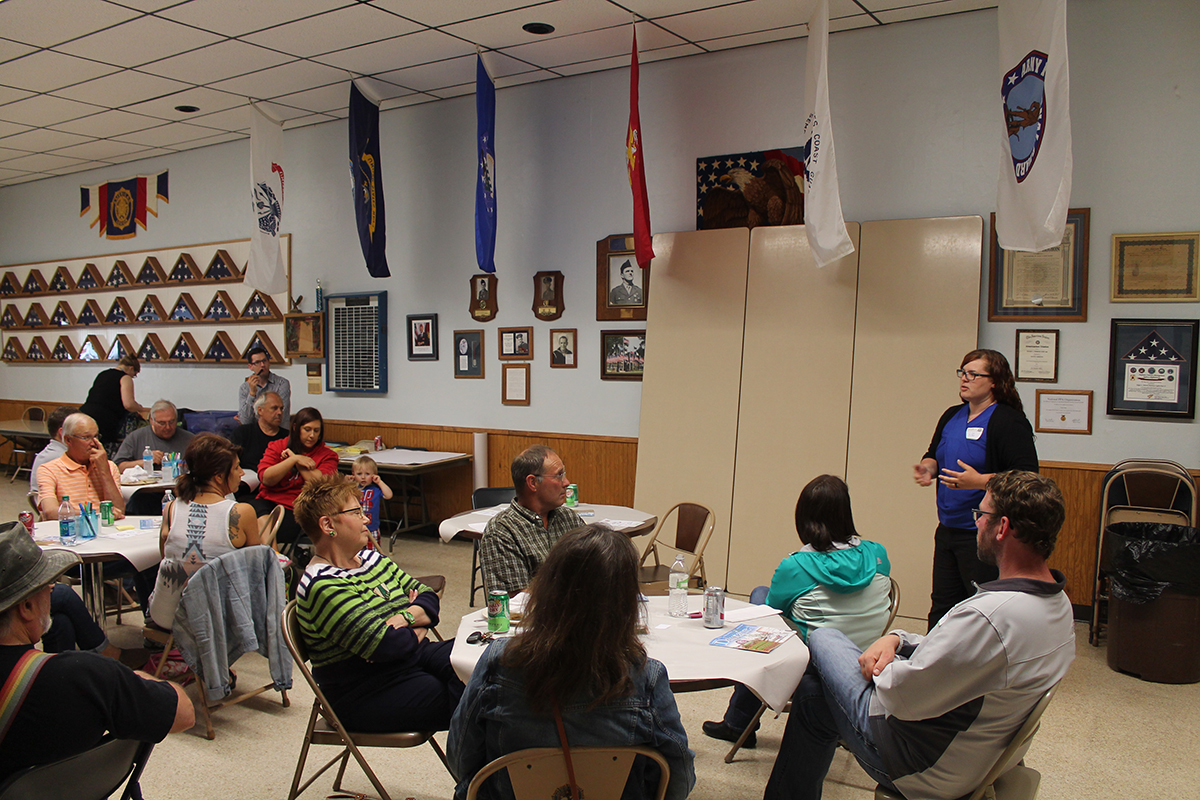 Liz Hannum speaks about her experiences in boosting entrepreneurial activity in Aberdeen. Photo by Jason Uphoff

Advice from down the road

Liz Hannum, who works with entrepreneurially minded students at Northern State University in and co-owns a handful of Aberdeen, S.D., businesses, also was featured in the May/June edition of Dakotafire magazine and spoke to the Arlington crowd about her work with entrepreneurs in other nations, as well as how a new organization helping potential business owners reimagine what’s possible for entrepreneurs through an organization called StartHUB.

The group meets weekly to discuss business ideas, and has created an online voting system for people to “try out” entrepreneurial ideas by polling an audience to take the guesswork out of starting a new business.

“If you get 800 votes of support, that’s 800 people saying they will be your customer next week. Essentially, we’re providing proof of concept. … Sometimes, it’s just about getting feedback and supporting local businesses,” she said, and warned against seeing that process as a threat. “In small towns, it’s really easy to think of your neighbor as competition, and really, they’re not. What we’re doing on Main Street in Aberdeen is—instead of competing over the same 3,000 who walk up and down the street every day—trying to grow that to 6,000 people. We’re putting a restaurant next to a restaurant next to a restaurant, and becoming a destination. … We have a lot of empty spaces and dead-looking areas on Main Street.”

StartHUB is working on offering assistance with the first month’s rent for new downtown businesses.

“We’re trying to create an opportunity for people to try out new businesses,” she said. “We hope that they succeed, and we’ll try to get them there … (by) talking through any barriers.”

Here is a compiling of the ideas generated
at the Main Street Dakotafire Cafe in Arlington: 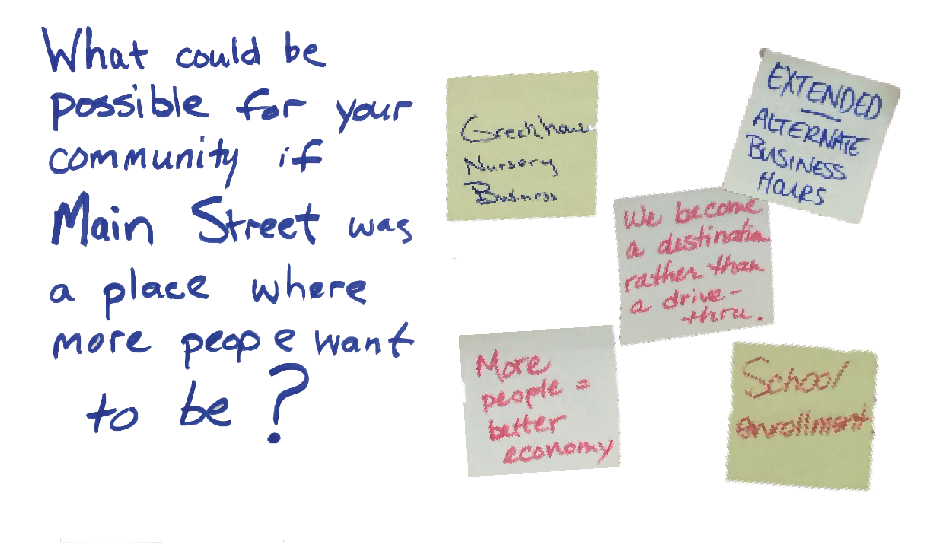 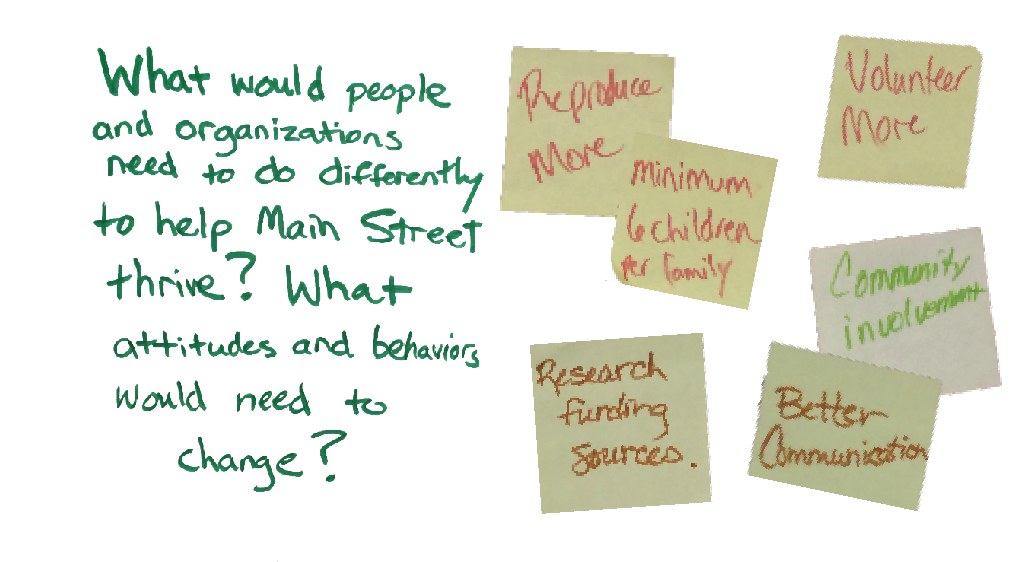