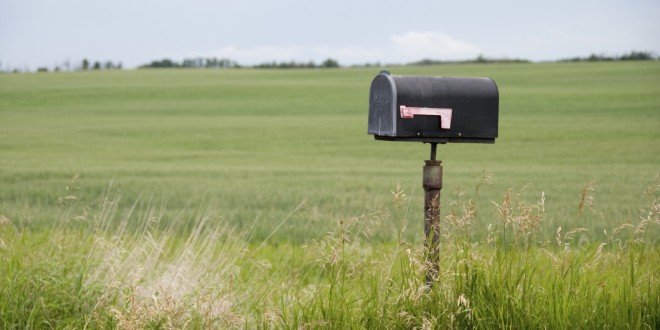 Weekly newspaper publishers in the Dakotas are concerned about the sweeping changes proposed for the U.S. Postal Service—post office closures, delivery hub closures, rate increases and the possible elimination of Saturday mail delivery—especially since they say the situation is close to terrible for their out-of-county subscribers already.

Weekly newspapers (and magazines) are typically delivered at a periodical rate, and the USPS does not guarantee delivery within any specified time. Within newspapers’ target market—typically their home counties—delivery is rarely delayed, but for delivery to subscribers outside of those areas, there’s really no telling when that newspaper will show up. Sometimes it might arrive just two days after it’s published; sometimes a bundle of three papers arrives more than three weeks later.

Moritz said that their local postmaster is very good at working with them to make sure the paper is delivered. The problems occur at some point after the newspapers leave Faulk County.

“Our papers going to Havana, N.D., 17 miles from Britton, would travel over 500 miles and take four days to be delivered there,” Card wrote in an e-mail.

Both papers have had to come up with their own workarounds for the delivery problems. Moritz said they have started putting their newspapers in envelopes and shipping them via first-class mail, which is more expensive for subscribers but ensures timely delivery. Card said they drive their papers to Havana themselves to ensure those subscribers still get two-day delivery.

Many weekly papers have had distant subscribers switch to e-editions to avoid the postal problems altogether.

But what about out-of-area subscribers who don’t have access to the Internet, or who don’t want to get their news online? Is it possible that postal delivery could get even worse with the proposed USPS changes?

The short answer is yes.

No one argues that the USPS isn’t in a dire financial situation. Rules on how the USPS must operate—it must prefund pension plans, for example—and reduced mail volume with the increase in e-mail and online bill payment have kept it from being profitable for years. On March 8, the agency said it will lose $83.2 billion by 2016 without some reforms to its operations.

The changes it says it would like to make are big ones:

Max Heath, postal committee chair of the National Newspaper Association, said in a video posted on the NAA’s web site that some of these might be bluster, to be used as bargaining chips in its negotiations with Congress, but even partial implementation of these changes would be significant.

According to Savethepostoffice.com, a 30-year veteran mail clerk who spoke at a meeting in Oregon said the closure of a processing center there would result in “massive mail failings,” which would delay delivery of weekly newspapers by several days. If that happens, he said, “You start producing a history, not a newspaper.”

Heath said the first round of post office closings did not have a significant effect on weekly newspapers, based on feedback from the NAA’s members. The next round of closings likely would, however, and the closing of processing centers certainly would.

“(It would be) just totally unreliable as far as being able to give any kind of service to distant mail,” Heath said. “It’s more or less forcing the post office to be only a provider of what’s commonly called last-mile delivery. We’re very concerned that if this goes through that it’ll be ‘Postalgeddon.’ There won’t be any decent delivery of mail outside our trade market.”

In an e-mail to Dakotafire on Monday, Heath advised weekly newspapers “to move everyone to digital that is willing to go.”

“Many of our senior subscribers, core readers of our papers such as snowbirds, etc. are not ready for reading e-subscriptions, so they might just leave,” Heath wrote. “[B]ut poor delivery of distant subscribers is a 20-year trend that doesn’t promise to get any better.”

Heath said it’s not a time to panic—the USPS is not going to close, and six-day delivery is guaranteed through at least Sept. 30 and likely longer (Congress guaranteed it through the end of the fiscal year, and if it is eliminated there will be a six-month warning of the change). Instead, Heath said, it’s time to act.

The NDNA gathered nearly 4,100 signatures in their “Deliver the Mail: North Dakotans for Timely Mail Delivery” campaign, indicating strong support among North Dakotans, according to Roger Bailey, executive director of the NDNA.

“We set a target of 100 signatures from each newspaper but in realty had hoped to get as many as 2,500 people to sign,” Bailey said in a press release on the NDNA website. “Getting more than 4,000 signatures in such a short time was a bonus.

They sent those signatures on to the U.S. Postmaster General, N.D. senators and their representative, and so far have received two responses.

“Postal reform is high on the radar right now in Congress, so the timing was perfect,” Bordewyk said, adding that the Senate would need to move on reform legislation in the next few weeks if the implementation of many of the planned changes is to be avoided.

The South Dakota petition had 2,598 signatures and many comments, including: 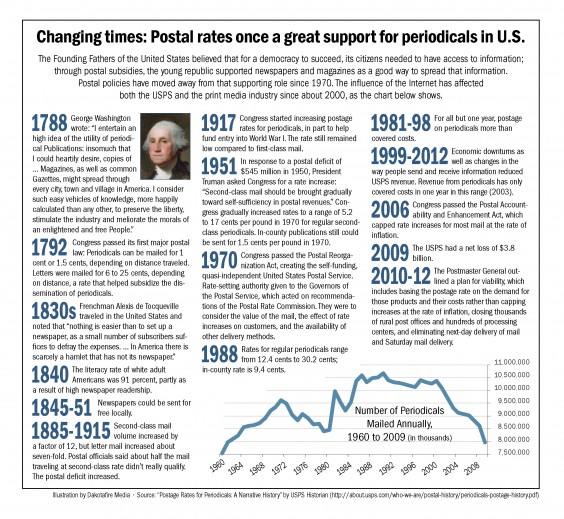 Changing times: Postal rates once a great support for periodicals in U.S. (Click on the image for a larger version)

See related story: Savings from closing post offices ‘not even a drop in the bucket’ of USPS budget