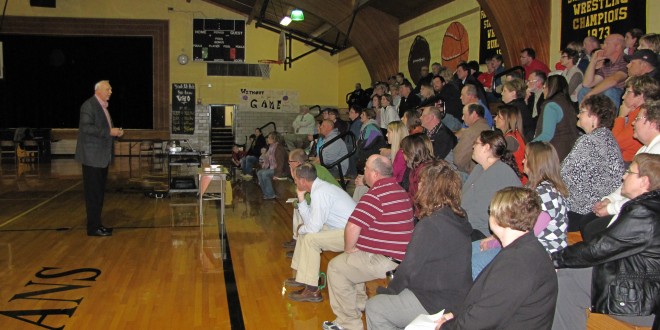 Can subtracting a day make the school week better?

Schools in South Dakota and around the country are facing some difficult arithmetic:

Start with the usual mix of students — some quick to learn, some slower, some busy with activities, some not, some well-behaved, others troublemakers. Add higher expectations. Add more paperwork. Subtract funding.

What does that equal?

Getting these parts to add up to a quality education is not easy, but an increasing number of school districts in South Dakota have found a little trick that helps their math problem resolve a little more favorably: the four-day school week. 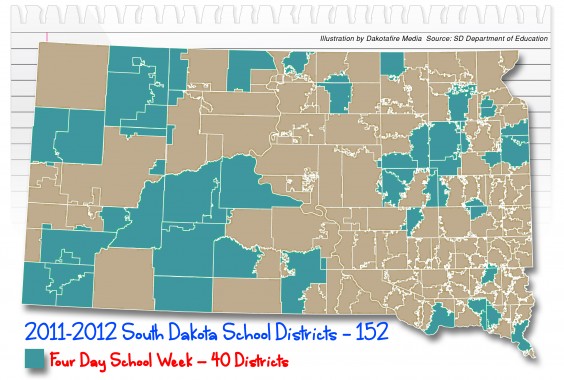 Forty school districts in South Dakota, out of 152 total, have now moved to the four-day week or a modified version of it, including seven in the Dakotafire region: Clark, Doland, Edmunds Central, Frederick Area, Hitchcock-Tulare, Webster and Willow Lake. Britton-Hecla is are considering it. School superintendents cite a variety of ways the schedule improves the job they can do for students, including more time for teacher preparation and professional development, more individual time with students, less distraction from extracurricular activities, and of course, cost savings.

But that leaves more than 100 school districts that are not on a four-day week. Some local districts have considered the option but have decided against making the change. On the national level, some education and policy leaders have argued that the four-day week puts budget concerns ahead of academic success.

So is the four-day week a net positive or negative as schools work to give their students a good education?

The latest message from many in national educational circles is that, as far as time in school goes, more is better.

Success stories coming from urban programs such as Knowledge Is Power Program (KIPP) have underscored the findings of the National Center on Time Learning, which show that the addition of quality time can help high-poverty schools achieve academically. “Used wisely and well, time can be the academic equalizer,” reads a report from the National Time and Learning Commission.

The key phrase is extended learning, and about 1,000 school districts are on calendars significantly longer than the traditional 180-day calendar, adding hours to the day, days to the year, or both, according to the National Center on Time and Learning (NCTL).

Duncan has also spoken out against efforts to reduce time in school for budget reasons: “The wrong way to increase productivity in an era of tight budgets is to cut back in a manner that damages school quality and hurts children. I’m talking about steps like reducing the number of days in the school year,” he is quoted as saying in “Learning Time in America,” a report by the NCTL.

A 2010 Wall Street Journal story about four-day school weeks described several school districts that had made the change in schedule because of dire budget situations, and quoted critics “who say the shorter week hurts students academically and complicates child-care efforts.” Respondents to a nonscientific reader poll that accompanied the story online overwhelmingly voted that a four-day school week would have a harmful effect on education.

Some local school districts that have looked at four-day weeks aren’t sold on them, either. Groton, Ipswich, Northwestern and Redfield are among those that looked at the option but decided not to pursue it. Faulkton and Langford discussed going to a four-day week, but this month both approved schedules that included more staff enrichment days but didn’t go to a full four-day week schedule. Warner Superintendent Kirk Easton said the district has looked at four-day weeks, but teachers worried about losing contact time with students.

“We all agree that it’s not good to reduce contact time with kids,” Easton said. 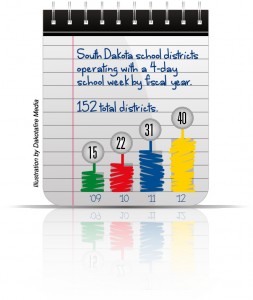 Supporters of four-day weeks say saving money is one reason for making the move, though the savings isn’t as great as one might think — dropping one day from a five-day week doesn’t reduce costs by 20 percent. A recent analysis by the Education Commission of the States found that the savings is more like 5.4 percent for districts that switched to four-day weeks. The big reason for this is that teacher salaries do not go down (since their teaching hours do not go down), and they are a significant chunk of most districts’ budgets.

But even a little savings can make a difference. Hitchcock-Tulare CEO Jeff Clark said the money saved since they went to the four-day week in 2010 has helped the district, “especially since we have seen two devastating years in regards to state funding.” Superintendent Randy Barondeau of Frederick Area said the district has saved $25,000 to $30,000 in busing costs alone, which is not a huge percentage of the district’s budget, but it could pay for an aide, or new textbooks. “It gives room for a little something else that can happen,” he said.

Other savings are found in support staff salaries and food service.

But superintendents who have made the change say that saving money is not the main reason to switch to a four-day week, and that it shouldn’t be a district’s only motivation.

Superintendent Dean Christiansen from Deuel, who has traveled around the state explaining how the four-day school week is working for his district, argues that more time in school is not necessarily better. He uses the European example: In some European countries, students go to school from 8 a.m. to noon and still maintain globally competitive test scores.

He also argues that with the four-day school week, schools are not actually losing any hours. In Deuel, they are still well above the state minimum requirement, Christiansen said.

Also, Barondeau pointed out that the four-day week isn’t all that drastic a change, since with holidays and other days off, about half of the weeks in a typical school calendar are four-day weeks anyway.

For example, teachers and students are encouraged to schedule doctor and other appointments on Fridays, and many ballgames and other extra activities such as science fair and Destination Imagination are now on Fridays.

Clark Superintendent Brian Heupel said moving extracurriculars away from classtime was a significant motivating factor in changing to a four-day week.

“In those four days (of school) we are really able to concentrate,” Heupel said.

Barondeau said that moving most ballgames to Thursday, Friday and Saturday nights means that students are no longer trying to stay awake in class after playing five or six quarters of basketball the night before and getting home at 10 p.m.

Because of the change, “they are more alert while they are here,” Barondeau said.

Both Barondeau and Superintendent Jim Hulscher of Doland said that after going to a four-day week, teachers have reported being further ahead in their textbooks than they were in previous years, which means by the end of the year they have covered more material.

The superintendents also said that morale among both students and teachers improved after the change.

Quality time for teachers and students

The other major motivating factor in going to a four-day week is the time it provides for teachers to do all the things that lead to good teaching. Time is now set aside in the calendar for professional development, preparation for class and making changes to the curriculum.

Time for the last task is especially important now as teachers move to adopt common core standards, which will need to be in place by the 2014-15 school year. Forty states have agreed to adopt the standards so students transferring to schools in different states will have the same basic level of learning.

With common core coming up, as well as other increasing expectations, “I don’t think we could do everything expected of us in a five-day week,” Christiansen said.

Christiansen said that schools are going to the private business model, which recognizes that if a change needs to be made in the organization, the business needs to give its employees time to make those changes.

Heupel says he thinks the quality of the curriculum has improved because of the increased time teachers have had for professional development and class preparation.

Most schools on the four-day week also provide more learning time for students on Fridays, both for students who are struggling and those who are excelling. This individual attention has made a significant difference to struggling students, Barondeau said. These students may be too intimidated to ask questions in class, but in one-on-one time with the teacher, they are more likely to make a breakthrough in understanding. Christiansen said they’ve cut the number of failing students in half each year, and he hopes this year to have no failing students.

And what about test scores? Do the results hold up?

There have been no conclusive studies about the effect of four-day school weeks on student achievement, according to the “Learning Time in America” report. Conducting such studies is more challenging because many of the schools who have adopted four-day weeks are small and rural, so the sample size is small and more easily affected by other variables.

For example, Barondeau said that looking at the data from the year before Frederick Area went to a four-day week and the year following would show such a dramatic rise “you’d think I’d forged it,” he said — but it had to do with a class that had been stellar all through the years following a class that had been below-average all through the years, not the four-day week.

Other superintendents said they hadn’t noticed any difference in test scores, either positive or negative. In an Associated Press story about four-day weeks, South Dakota’s education secretary, Melody Schopp, was quoted as saying scores have not declined on tests from schools that have switched to four-day weeks.

Christiansen, however, has seen improvements since they made the schedule change. Across a number of factors, including ACT scores and the number of students who have to take remedial courses the first year of college, Deuel improved after the four-day week was implemented and now exceeds the state average on many statistics.

And now the question that always comes up with the four-day week: How will parents of younger students find childcare on Fridays?

Apparently, although it’s typically initially raised as a concern in community discussions, it rarely becomes an issue.

Heupel agreed: If he calls off school at 6 a.m. because of a blizzard but parents still need to go to work, they somehow find childcare. When they are given the school schedule with months to plan, they are generally able to find something that works for one day a week, he says. 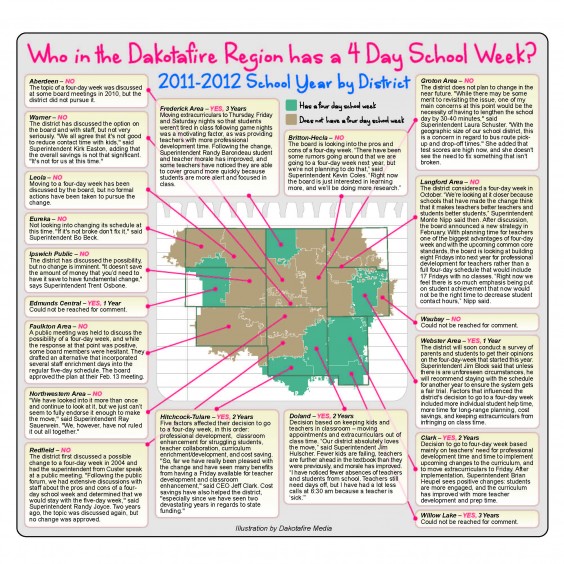 What about North Dakota?

North Dakota currently has no schools on a four-day week. Marilyn Orgaard from the N.D. Department of Public Instruction says some schools have looked at four-day weeks but have not opted to make the change. North Dakota’s Century Code mandates 182 days of school a year, which presents an obstacle to a four-day week. South Dakota has no mandatory number of days; the Legislature has specified only a minimum number of hours.