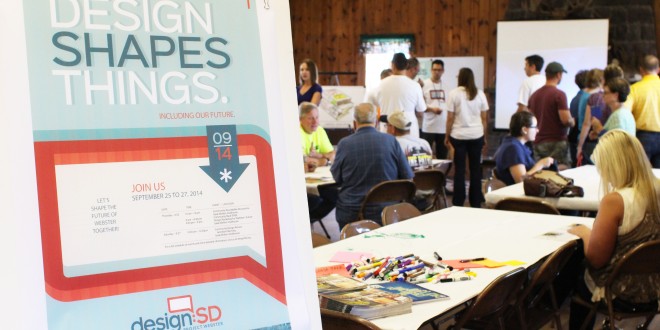 Design:SD ends with a design review by the community. Photo by Jamie Horter 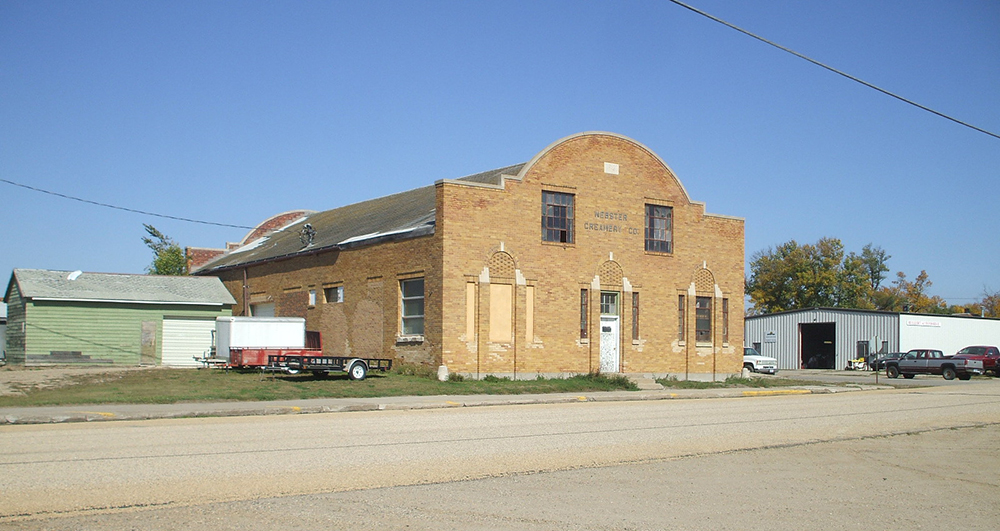 Architects helped Webster residents re-imagine some of their buildings: an old
creamery could become a restaurant with outdoor seating.

Over a three-day period in September, design:SD, composed of a team of architects and community developers, gathered in Webster, S.D., to help shape ideas the community had envisioned for their future. 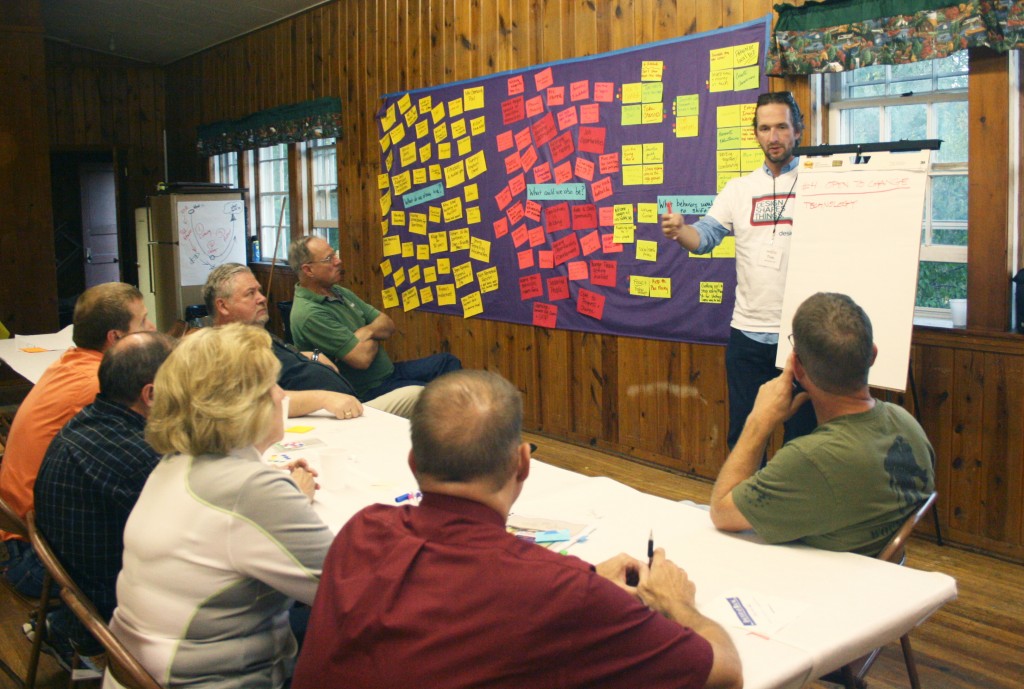 The design charrette began with a community workshop to hear the ideas of locals. It culminated in a presentation from the designers, explaining what they had heard from the community and sharing their suggestions to turn the community’s hopes into actionable plans. A series of “vision boards” were created for the community to use as the process moves forward.

“We create a set of vision boards that are meant to illuminate the things they (the community) want to make happen and inspire them to see the bigger picture,” said Joe Bartmann, coordinator for the design:SD team.

Bartmann noted that another purpose of the boards is to illuminate “blind spots” that may be keeping a community stuck, so that they can recognize challenges and break barriers to successfully move forward. 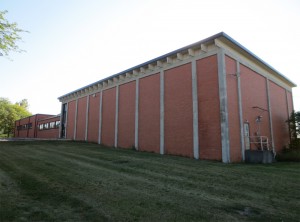 A former industrial
building could become a more pleasant space with the addition of windows. 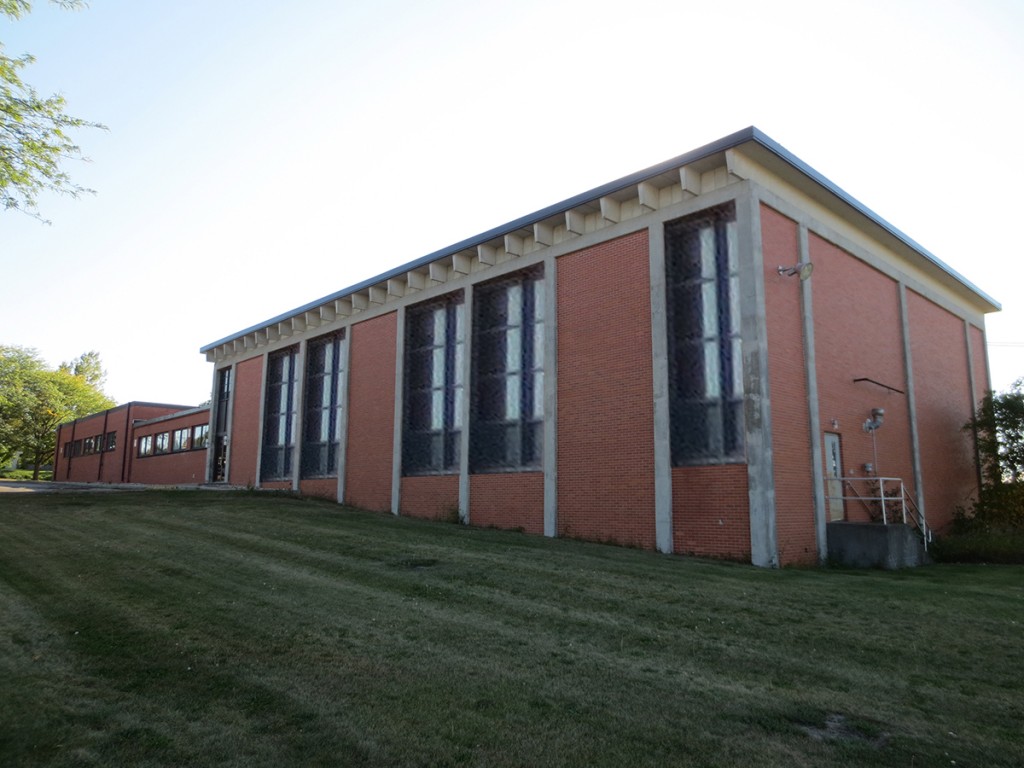 Bartmann said design:SD began with the idea to “help reimagine what it means to be a rural community these days.”

“From there we’ve just been tweaking it,” Bartmann said. “We got the sense we were creating a cool experience for people and getting them fired up, and not much was happening after we left. We didn’t want to put resources into something that wasn’t working long term.”

The process has since developed into facilitating long-term implementation and success of projects.

After being awarded a $10,000 grant from the American Institute of Architects, design:SD looked for communities that desired to work long-term on goals. Webster leaders said they were interested, and a core team of locals formed. Design:SD partnered with Dakota Resources to host a series of community conversations six months prior to hosting the design charrette.

In addition to the design:SD team, South Dakota State University Department of Architecture students worked with the community, gathering information about Webster and creating a 3D model of the town over a course of two years before the design charrette.

CHARRETTE: A community design charrette is an intense period of design activity undertaken in a community in order to create a new visual direction for that place. The process involves collaboration among many stakeholders in the community with a team of design experts.

Melissa Waldner serves as Webster’s local coordinator for their community project. She said that main keys for success are leadership and commitment of locals to see their vision through. 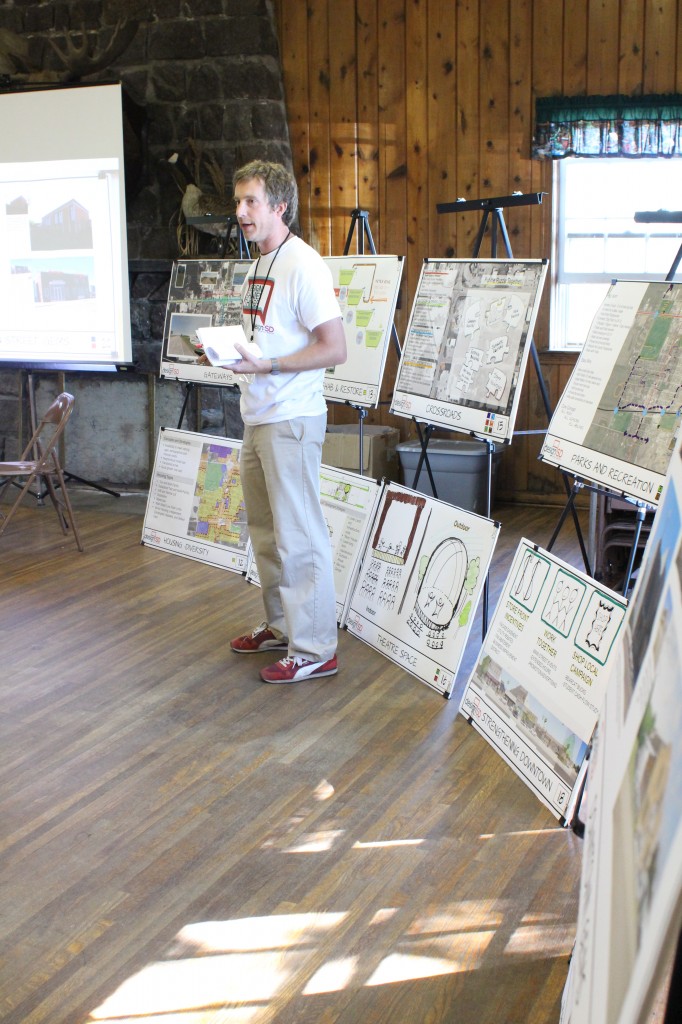 “They definitely need to have communitywide support, and that’s financially and with time,” said Waldner, who is executive director of the Webster Area Development Corporation.

Webster had funding help through grants, along with 12 local sponsors and a donation from a resident to pay for the $10,000 cost of the process.

“It can’t just be one organization that pays for everything,” Waldner said. “It’s got to be co-ownership, and then having a lot of people who are ready to do the work, not just one or two.”

Additionally, the ability to coordinate with people who can help find funding sources for implementation of plans is vital.

Seeing the project through

Part of the design:SD approach in Webster is preparing local leaders to make their vision happen.

Another community gathering will happen soon to bring together people interested in taking action on certain issues. The meeting will serve as a continuation of groups that had gathered around issues identified before the charrette, and allow for new participants to become oriented within the action groups.

Bartmann, who is also a community coach for Dakota Resources, will continue to coach action teams over a six-month period, with the option to continue coaching beyond that time frame if needed. The goal is to develop leadership that emerges from each action group to carry the projects forward.

The community plans to have continuing meetings and a one-year celebration and reflection on work accomplished next September.

“I’m looking forward to seeing how the teams take on different projects and how they make them happen,” Waldner said. 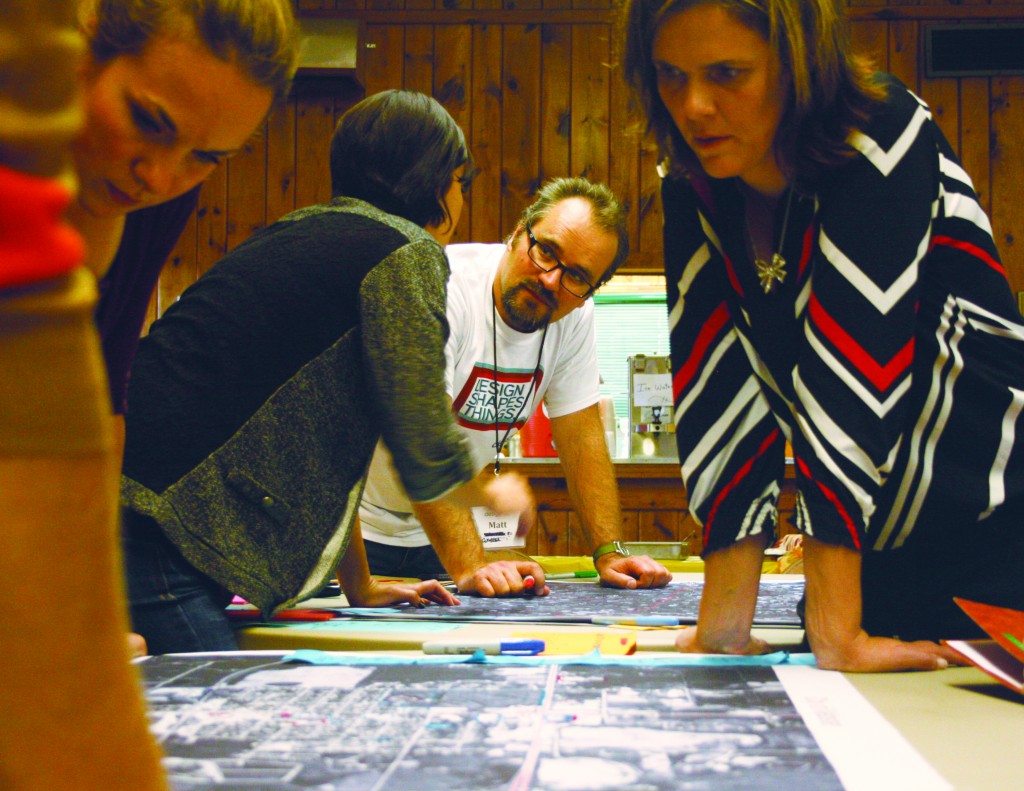 Landscape architect Matt Fridell listens to a Webster resident as participants of his group drew on large maps to give insight into where they like to spend time in Webster, compared to where visitors spend time. 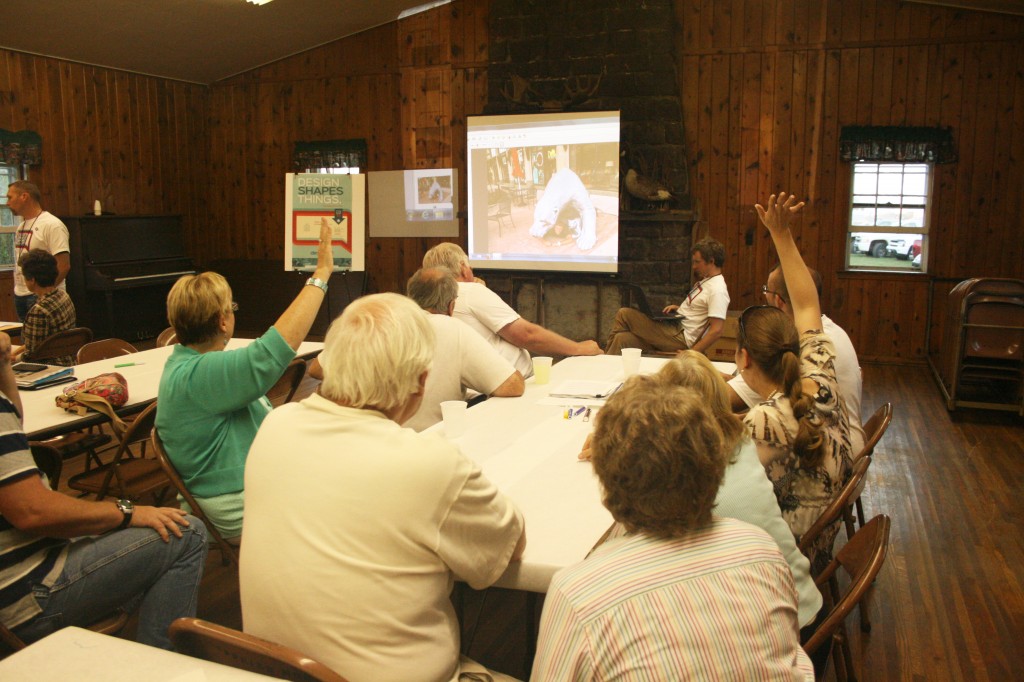 Webster residents took an image survey
of designs from various communities, indicating what kinds of design they liked and didn’t. 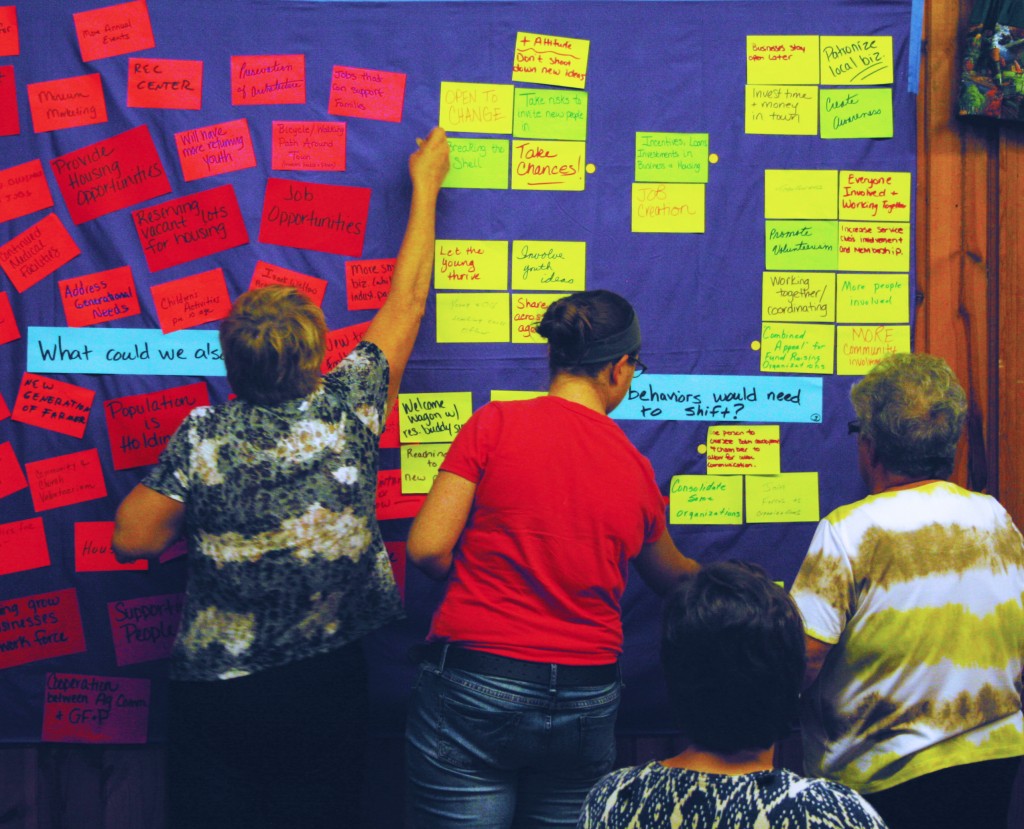 Residents voted on priorities on a wall of ideas created at a previous brainstorming session.
Photos by Heidi Marttila-Losure

To see all of the vision boards created by the design:SD team, go to websterareadev.blogspot.com/p/designsd-workshop.html.

To learn more about how your community can be involved with the design:SD team, visit designSD.org.