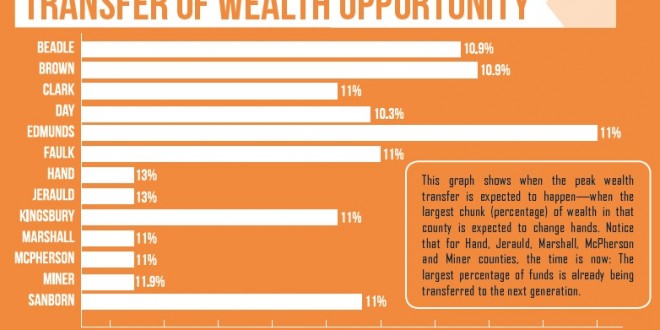 We apologize for the printing problem in the latest issue of Dakotafire: Graphics on pages 8 and 9 printed without some text. We are looking for a solution, but in the meantime, the graphics are reproduced below.

We are sorry for the inconvenience.

Comparing the Transfer of Wealth Opportunities in Dakotafire Counties

The projections from the two Dakotas are not directly comparable to one another since they were done by two different organizations using different methodologies. (See note below.)
The point is this: In both states, the numbers—and the opportunities—are big. 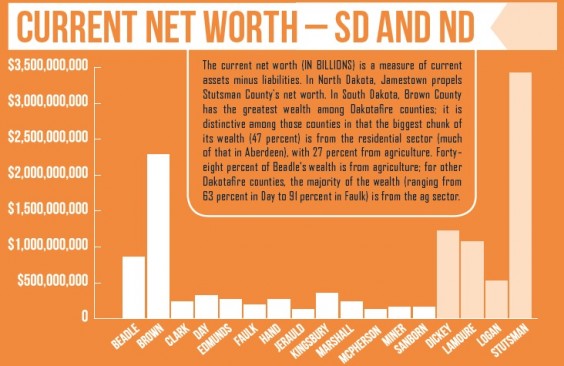 The current net worth (IN BILLIONS) is a measure of current assets minus liabilities. In North Dakota, Jamestown propels Stutsman County’s net worth. In South Dakota, Brown County has the greatest wealth among Dakotafire counties; it is distinctive among those counties in that the biggest chunk of its wealth (47 percent) is from the residential sector (much of that in Aberdeen), with 27 percent from agriculture. Forty-eight percent of Beadle's wealth is from agriculture; for other Dakotafire counties, the majority of the wealth (ranging from 63 percent in Day to 91 percent in Faulk) is from the ag sector. 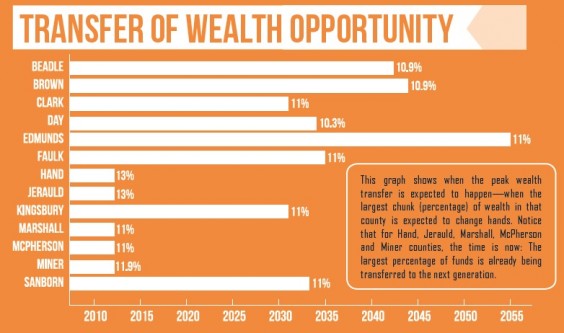 This graph shows when the peak wealth transfer is expected to happen—when the largest chunk (percentage) of wealth in that county is expected to change hands. Notice that for Hand, Jerauld, Marshall, McPherson and Miner counties, the time is now: The largest percentage of funds is already being transferred to the next generation. 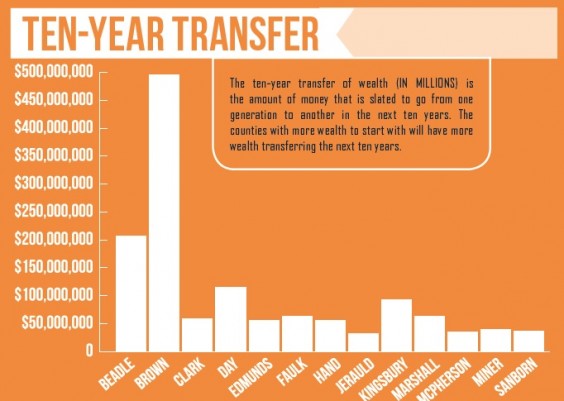 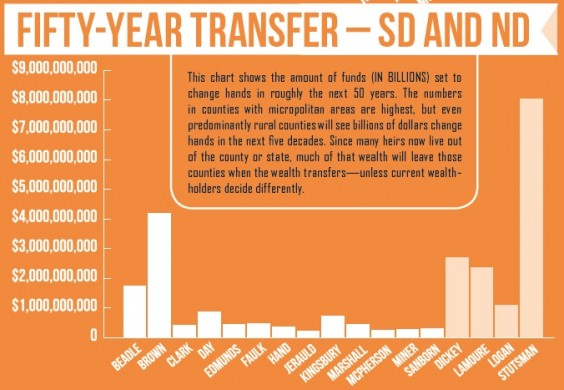 This chart shows the amount of funds (IN BILLIONS) set to change hands in roughly the next 50 years. The numbers in counties with micropolitan areas are highest, but even predominantly rural counties will see billions of dollars change hands in the next five decades. Since many heirs now live out of the county or state, much of that wealth will leave those counties when the wealth transfers—unless current wealth-holders decide differently. 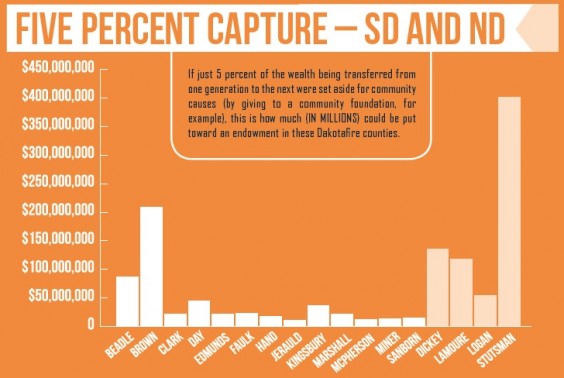 If just 5 percent of the wealth (IN MILLIONS) being transferred from one generation to the next were set aside for community causes (by giving to a community foundation, for example), this is how much could be put toward an endowment in these Dakotafire counties. 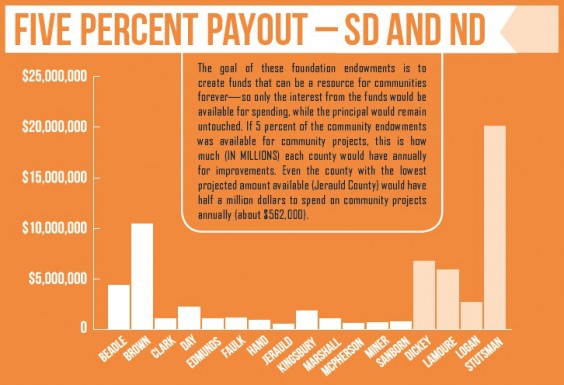 The goal of these foundation endowments (IN MILLIONS) is to create funds that can be a resource for communities forever—so only the interest from the funds would be available for spending, while theprincipal would remain untouched. If 5 percent of the community endowments was available for community projects, this is how much each county would have annually for improvements. Even the county with the lowest projected amount available (Jerauld County) would have half a million dollars to spend on community projects annually (about $562,000).

Note: Here are some of the ways the transfer of wealth studies in the two Dakotas differ: The N.D.  study includes some businesses in household wealth, while the S.D. discounts business value in household wealth; slightly different time periods are used (2007-61 for North Dakota and 2010-60 for South Dakota); the S.D. study includes only estate gifts, and the N.D. includes giving during people’s lifetimes; and the N.D. study assumes a growth rate of 3 percent, while the S.D. study has a growth rate that varies based on population.

Information from the South Dakota Transfer of Wealth Report, via the South Dakota Community Foundation (www.sdcommunityfoundation.org/wealthanalysis.htm) and from “Communities with Possibilities: A Supplement to Endless Possibilities on the Prairie: The North Dakota County and City Wealth Transfer Analysis” commissioned by the Impact Foundation (www.impactgiveback.org/store). John Havens, senior research associate
at the Center on Wealth and Philanthropy and co-author of the N.D. study, assisted with analysis of the study.