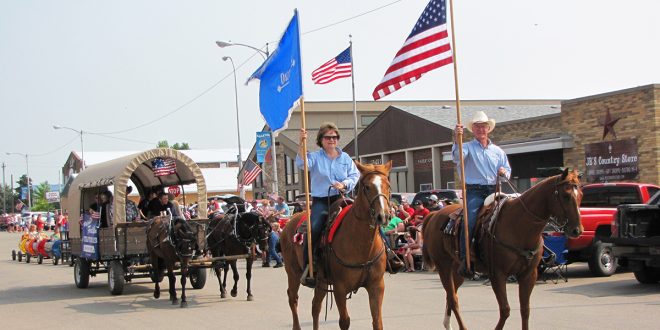 A taste of Dakota festivals 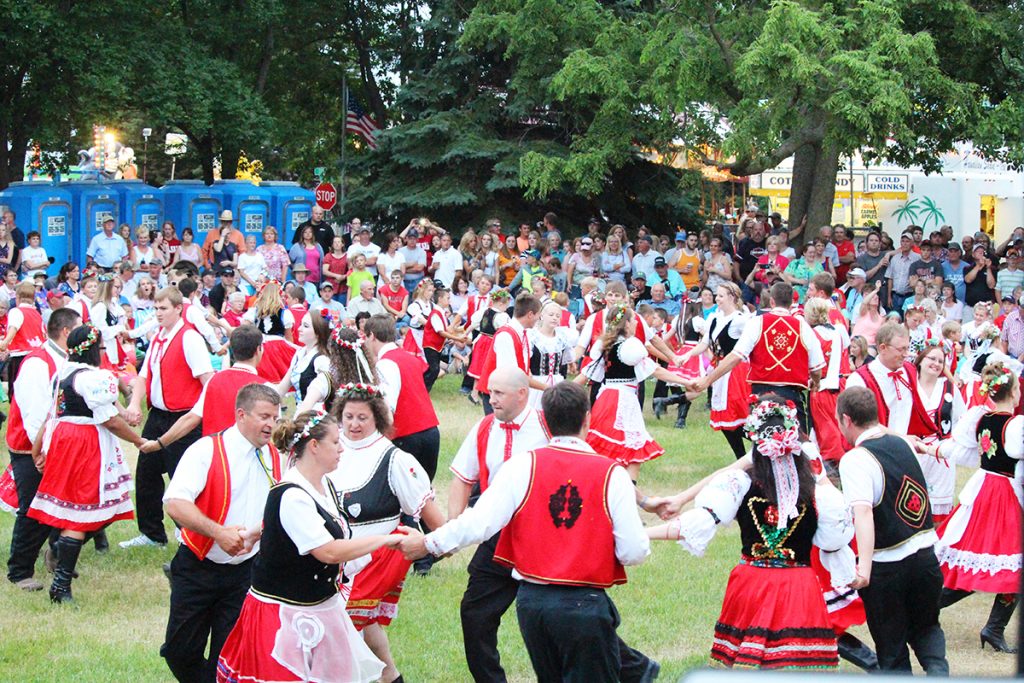 For nearly 70 years, the community of Tabor, S.D., has celebrated its predominantly Czechoslovakian heritage around farmers’ schedules, with a Czech pioneer village, kolache baking, polka dance-off, and Czech Days queen, prince and princess pageants. The two-day festival benefits Tabor’s economy and sense of community. “Almost every resident has a part doing something, whether it’s working in the halls serving meals, preparing meals, or putting up benches around Main Street,” said event chairman Dennis Povondra, adding that “it’s a tourism boost to our community and our state.” Next year’s festivities will be June 15-18. 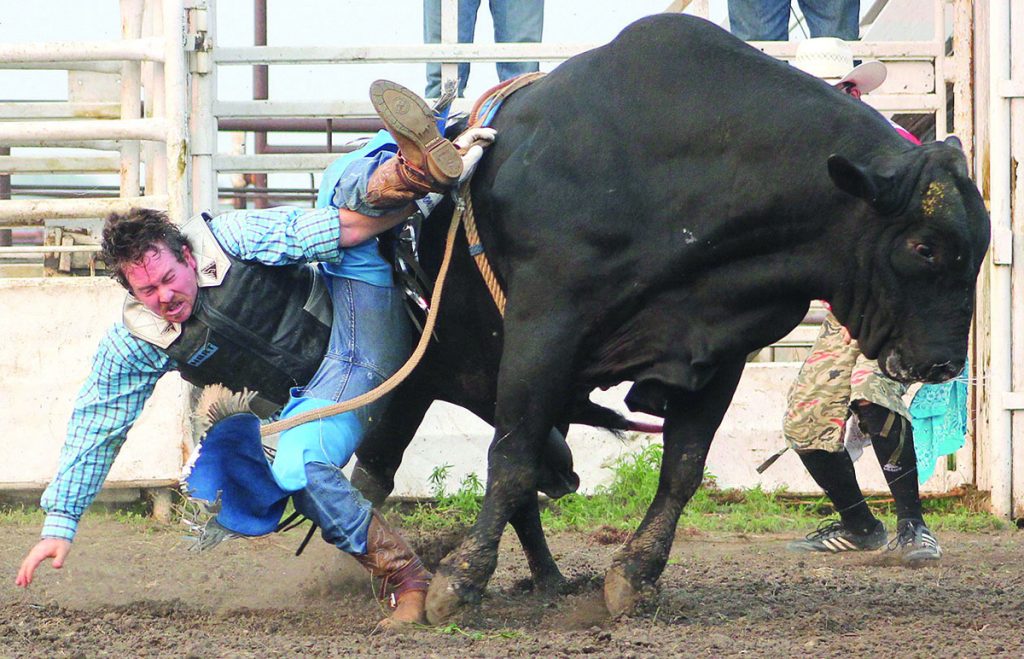 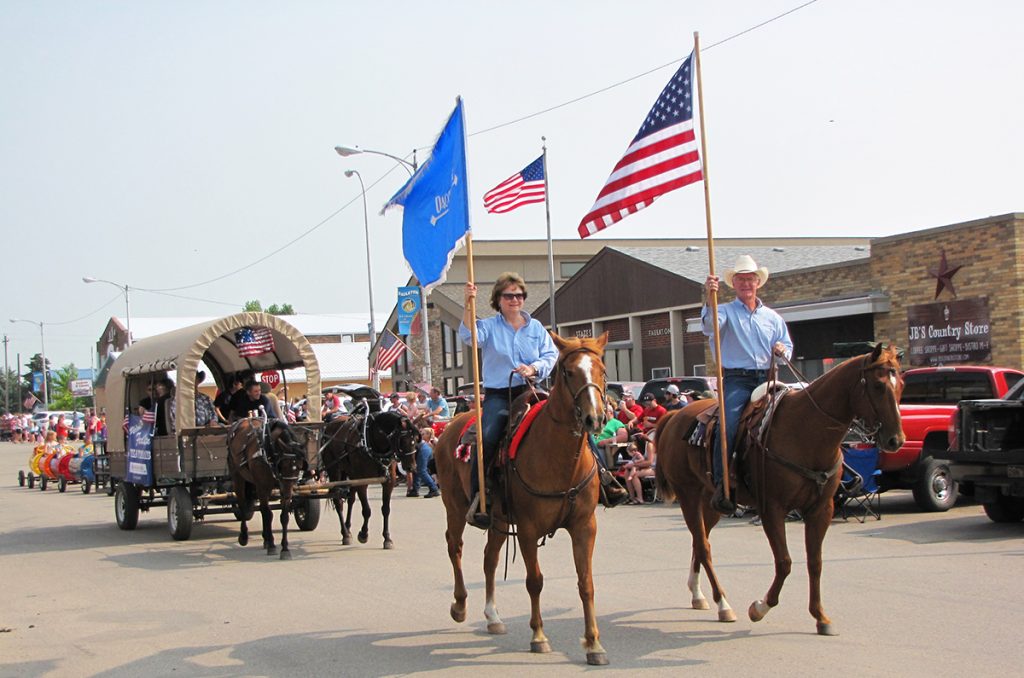 Independence Day in Faulkton, S.D., has long been a “royal” event, held in the Pink Castle built by John A. Pickler, who is known as South Dakota’s first congressman and one of Faulkton’s first settlers after the Civil War. Pickler and other Civil War veterans called their Fourth of July celebration Wild West Days, and the community continues to hold the event every year, with a theme focusing on some element of frontier life. “It’s like walking back into 1890,” said Jodi Moritz, president of the Faulk County Historical Society. The event features fireworks, bull-riding, and a parade. Every few years—including this year—the event is extended to July 1-4, to accommodate an all-school reunion. 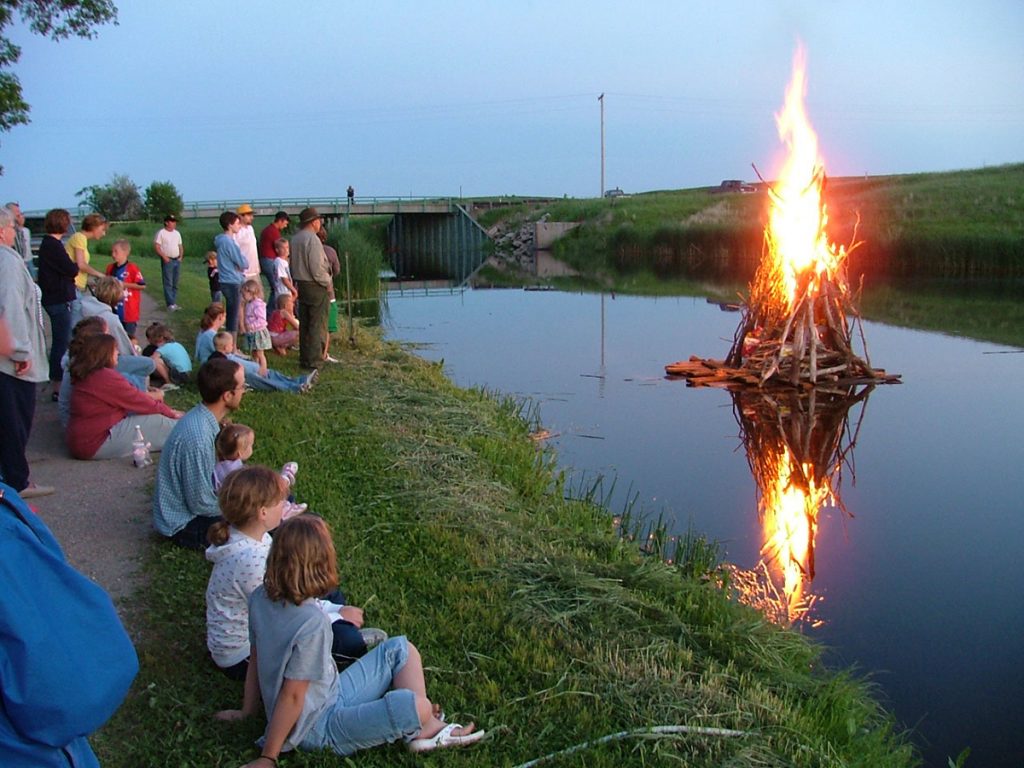 Frederick was named after a Finnish railroad clerk, Kustaa “Frederick” Bergstadius, and many of Frederick’s first settlers were Finnish. The Finns who settled northeast of town in the late 1800s soon re-established the midsummer celebrations they missed from their homeland. Those events were held until the 1970s. In 2008, the Frederick community revived the tradition, with some updates—including a traditional bonfire on the water, which on still water gives the illusion of burning down as well as up. The bonfire, an ancient tradition, was intended to keep evil spirits away from the upcoming harvest. (Nowadays people just enjoy the view.) The event includes a parade, Finnish games, Finnish music and a wife-carrying contest. The 2017 event will be June 23-25, held in conjunction with Frederick’s all-school reunion. 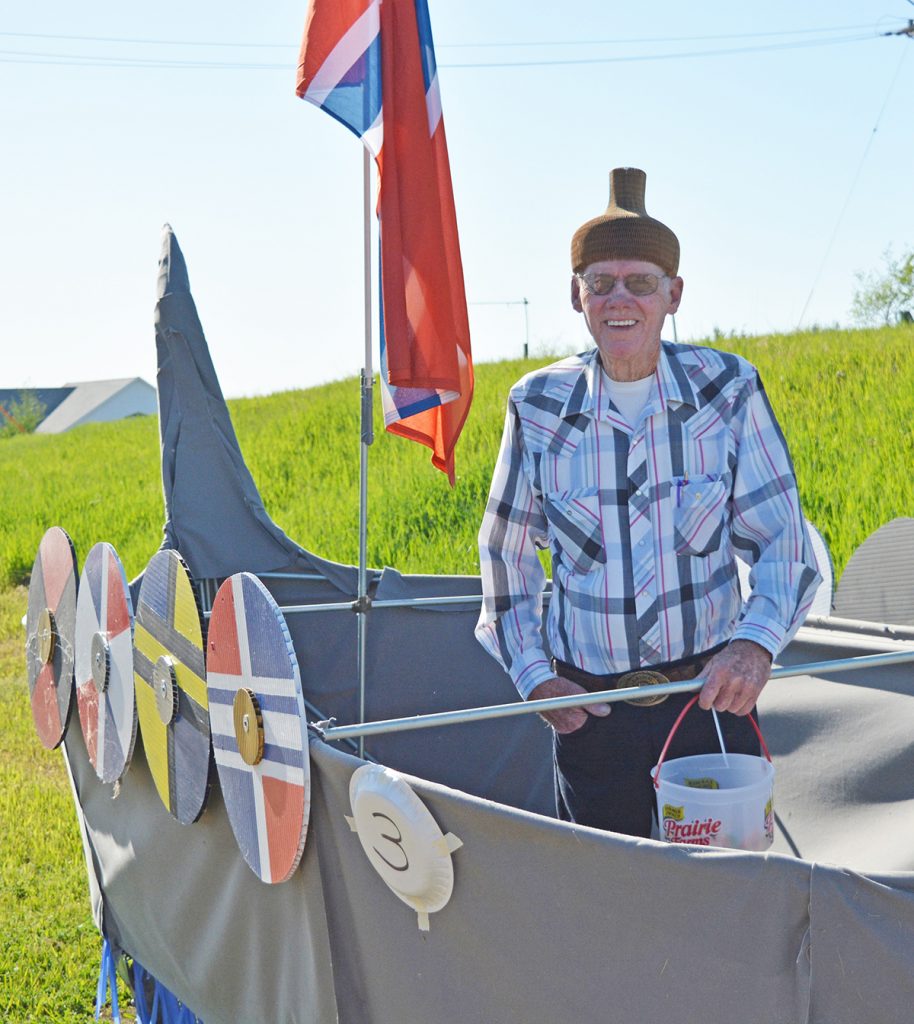 The American flag is not the only red, white and blue banner flying proudly in Vivian, S.D. Each Syttende Mai—or May 17—the American and Norwegian flags fly harmoniously, in respect for Norway’s Independence Day. The predominantly Norwegian town of 100 swells to more than 200 for the day, when attendees dine on lutefisk, meatballs, lefse, mashed potatoes, boiled cabbage, creamed peas, fruit soup and desserts such as fattigman, kransekake, krumkake and rosettes. Rosmaling—painting objects with floral patterns—is offered, and fiddlers, dancers and pianists perform. All guests are welcome. “For that day, all of them are Norwegian,” said Vern Larson, chairman of the “UFFDA Crew” that organizes the annual event. 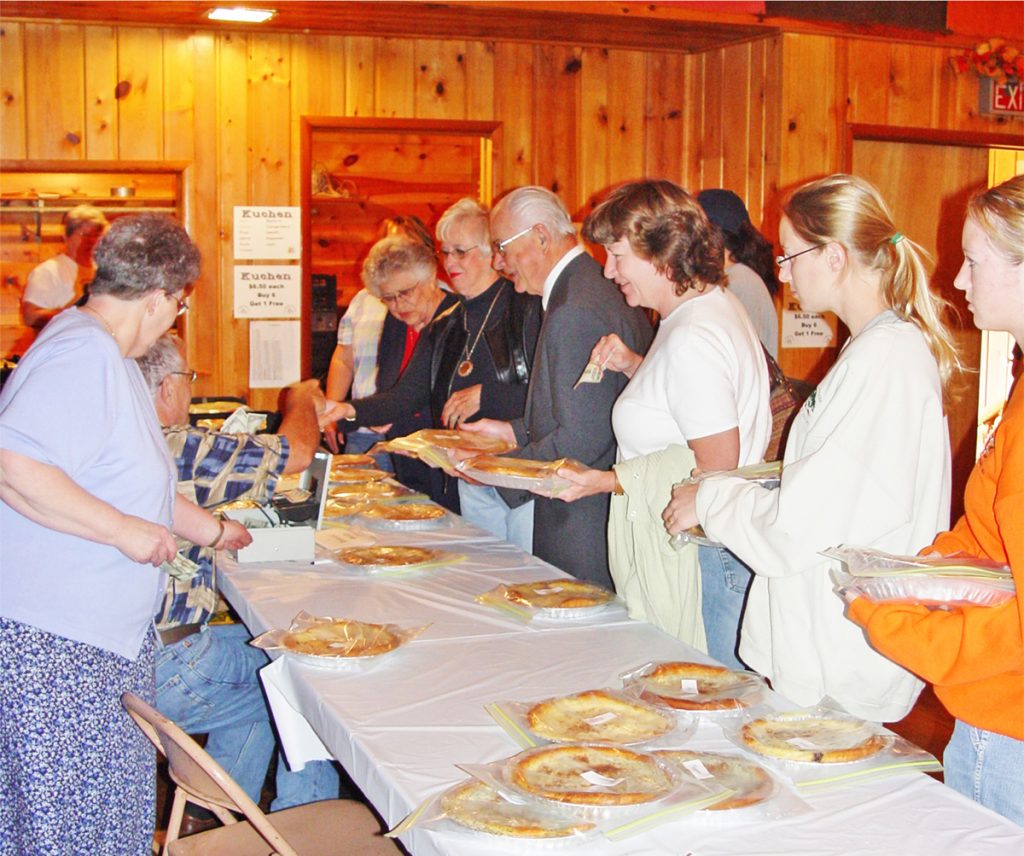 Each September, the community of Delmont—and its neighbors—gather “in the kitchen” to celebrate the area’s rich German flair. “We make it a living tradition by providing people with a way to keep the tradition of having kuchen in your household.” The Delmont Historical Society teaches the art of creating the German pastry—a sweet, yeasty cake filled with custard or fruit, according to the organization’s president, Earla Strid. The day also includes a traditional meal of brats and kuchen; a quilt show; a craft show; and a visit from Mr. and Miss Kuchen, who are selected in a pageant for children ages 3 to 18 about a month before the festival.

What began as a small farmyard gathering to revive the threshing bees of old has turned into the annual Twin River Old Iron Harvest Festival, complete with corn-picking, butter-churning, sheep-sheering, fiddlers, agricultural history
presentations and more. “We want to show (the younger generations) how it used to be,” said Glennis Stern, president of the festival, who hosted the initial backyard threshing gatherings. 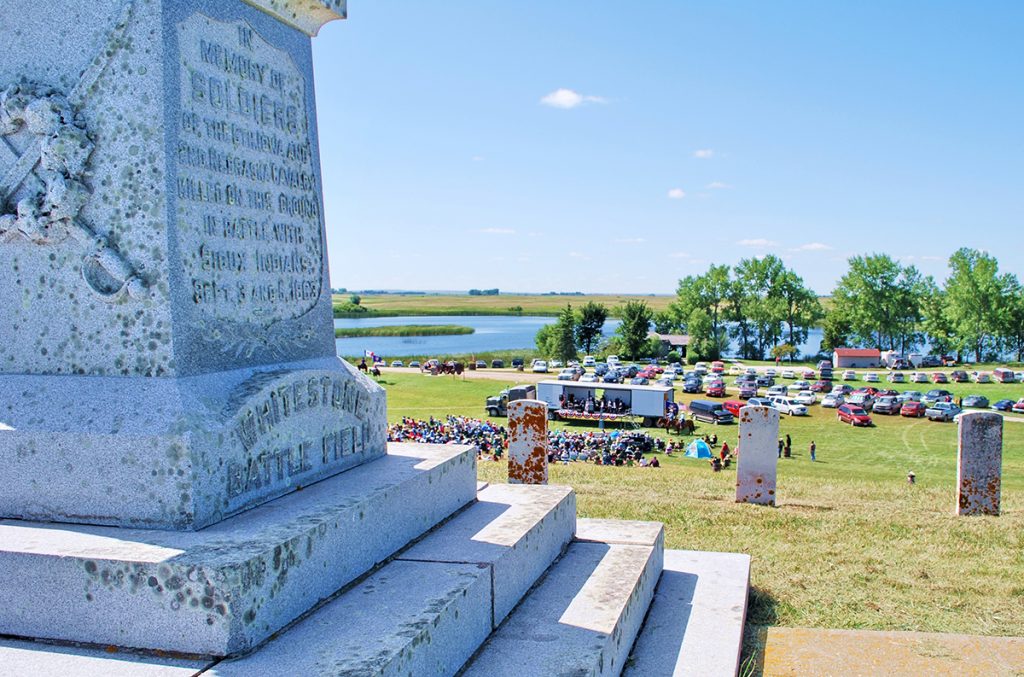 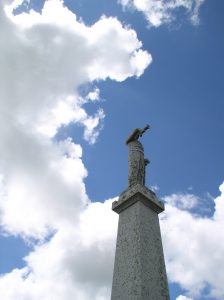 Education Day at Whitestone Hill State Historic Site is the North Dakota Historical Society’s annual opportunity to teach elementary and middle school students about the Dakota Uprising, a two-day conflict between Gen. Alfred Sully and the Yanktonai, Dakota, Hunkpapa Lakota and Blackfeet in September 1863 that resulted in the deaths or injuries of nearly 200 Native people and 60 soldiers. The event includes hands-on presentations, in which youth learn skills such as hide tanning, as well as experience performances, including hoop dances. Whitestone Hill State Historic Site was unnoticed until a man collecting buffalo bones happened upon human remains there, according to Jeanette Robb-Ruenz of the Whitestone Hill Historical Society. Monuments were erected for the soldiers and Natives killed in the massacre in 1909 and 1942, respectively. The event is held in September.

2016-09-16
Heidi Marttila-Losure
Share !
Previous: The power in our histories
Next: Navigating the news
Scroll To Top