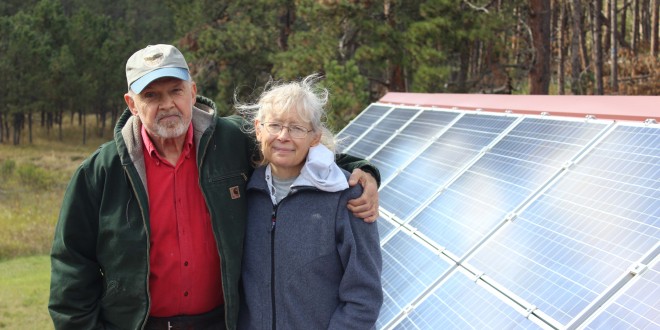 South Dakota was once called “The Sunshine State.” The nickname fell out of use, but South Dakota’s sunniness has not changed.

This year, some activists are hoping to tap into the state’s clean energy potential with a grass-roots campaign called Solarize SD: Energy for a Brighter Future. The goal is not just raising awareness, but actually increasing renewable energy production by supporting projects for homeowners, renters, farmers, and ranchers throughout South Dakota.

Solar energy “is clean, efficient and sets us free from being captive consumers of nothing but fossil fuels,” said Barbara Sogn-Frank, Sioux Falls campaign leader of Solarize SD.

Information will be distributed at county fairs, farmers markets and community events, and through social media.

The campaign, which was created by members of Dakota Rural Action in partnership with GenPro, Eco Works SD, and Williams Power Systems, is issuing a call to action.

“There are a lot of people who would love to add solar energy production to their homes but who don’t know where to start, where to access it and how to afford it,” Sogn-Frank said.

“We’ve set some concrete goals beyond the idea of getting the word out,” says Don Kelley, chairman of the board of directors for Dakota Rural Action.

Solarize SD will help South Dakotans replace at least 1,000 compact fluorescent and standard light bulbs with LED lights that use a fraction of the energy. The campaign will also help hundreds analyze their home energy use with trained “solar ambassadors.” A full consultation will include discussing the feasibility of solar and wind technology for the individual, Kelley said.

“We also talk to folks about solar (water) heating with roof collectors and solar water pumps for farms and ranches,” he added.

The consultant examines the client’s recent utility bills to calculate the advantage of supplying some or all of their energy needs from renewable sources. Solarize SD aims to do 100 consultations, and to install partial solar energy sourcing for at least 15 individuals. Lastly, the campaign aims for eight individuals to install a full energy system in their home, farm or ranch.

Supplying a home’s energy solely through solar power may sound daunting and perhaps a little risky, but Don and Kim Kelley and have found it has worked well for them in their Nemo, S.D., home.

“My wife and I have lived in a totally solar-powered house for the past seven years that is off the grid. We live very comfortably and affordably,” Kelley explains. “To us, it seems that solar power energy has matured. It’s a reliable and appealing alternative.”

They were inspired to get their power from the sun both out of principle and necessity. After living in a developing nation for several years, they came to appreciate the simpler and more environmentally friendly way of life. When they returned home and started homesteading a mile away from the nearest utility hookup, powering the house through their own solar energy made sense economically.

Kelley sees many benefits for South Dakota communities if more homes are powered by solar energy.

“South Dakotans are increasingly aware that utilities are charging for peak rates of electricity use,” he explained. “Solar energy is most available at the same time of the day, so people with solar panels generate a lot locally, and the excess can be stored. If there were a good many solar customers in the neighborhood who had extra sun energy during peak times, it would make a cheaper source of electricity.”

Traditional utilities, in comparison, have to buy more power from the interstate grid during that peak time, or build peak plants powered by diesel generators or some other non-renewable source, either of which would increase prices.

In addition, much of the electricity used in rural communities has traveled a long distance. Many rural electric cooperatives source their energy from North Dakota. An average of 15 percent of the energy is lost in transportation across wires, Kelley said. A solar grid is also less susceptible to problems in adverse weather.

Kelley acknowledges that there are obstacles to Solarize SD’s vision.

“In South Dakota, it’s hard to find installers of small solar panels and wind generators,” Kelley said. “The ones that have come here tend to move out of state because adoption of technology is so much more rapid and popular with other states around us.”

South Dakota is ranked 14th in the nation for solar power potential by Greener Energies. It ranks fourth for wind energy potential, but 18th for existing wind capacity.

In the United States, 43 out of 50 states have legislation that requires utilities to pay back the same rates to energy-producing customers, a practice known as net-metering. Three additional states have utility-based agreements in practice.

South Dakota is one of only four states that has no statewide agreement.

“South Dakota is behind the curve,” Kelley said. “We are underutilizing the resources we have here. By making it easier for people to install small-scale generating facilities, we’d benefit so much.”

Dakota Rural Action has worked for three years to bring net-metering legislation to state sessions in Pierre, but it has not yet been successful.

“Legislators heard about solar energy from utility lobbyists long before us,” Kelley said.

Sogn-Frank agreed that the biggest obstacles to access are political.

“Political resistance from South Dakota state legislators, the governor’s office and the Public Utilities Commission stands in the way of opening up accessibility of distributed renewable energy,” Sogn-Frank says. “They are heavily lobbied by fossil fuel, chemical and big agriculture corporations, and those lobbying efforts are quite successful here.”

They also find that legislators think few people are in favor of small-scale renewable energy. Solarize SD aims to grow this group through the campaign.

“We want to light the fire, drum up interest, and get a few folks started with technology. We hope that word-of-mouth will help spread the advantages to others as well.”

Dispelling misconceptions is also a goal.

“Quite a few folks feel it’s unreliable or so expensive it’s just for rich folks, but neither of these is really true,” Kelley said.

People are hesitant to install a system that is unfamiliar to them, especially if it requires a large sum upfront. In other states, Kelley said, this initial cost can be mediated with payment arrangements in which solar companies act as a third party that installs the panels in a location, and then leases the equipment to the homeowner. Contracts can be structured to provide the same price for electricity for as long as 15 years. The steadiness in cost is attractive when compared to fluctuations in utility electricity prices over time.

Once installed, the system is easy to maintain, Kelley said.

“The only thing I have to do with my own is sweep snow off of it,” he laughed.

Those interested in an energy consultation through the Solarize SD campaign should email action@dakotarural.org or call 605-939-0527.

communities energy Growth Own Our Energy people 2015-09-15
Rebecca Froehlich
Share !
Previous: From the Editor: People power
Next: What if engaging youth should be supporting youth?
Scroll To Top