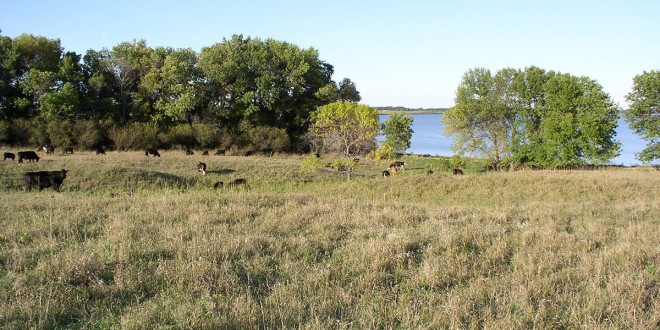 Smith grows grass on 500 acres of his 600-acre farm. All plants—grains and grasses—are used to feed his own livestock. Photo by Rick Smith 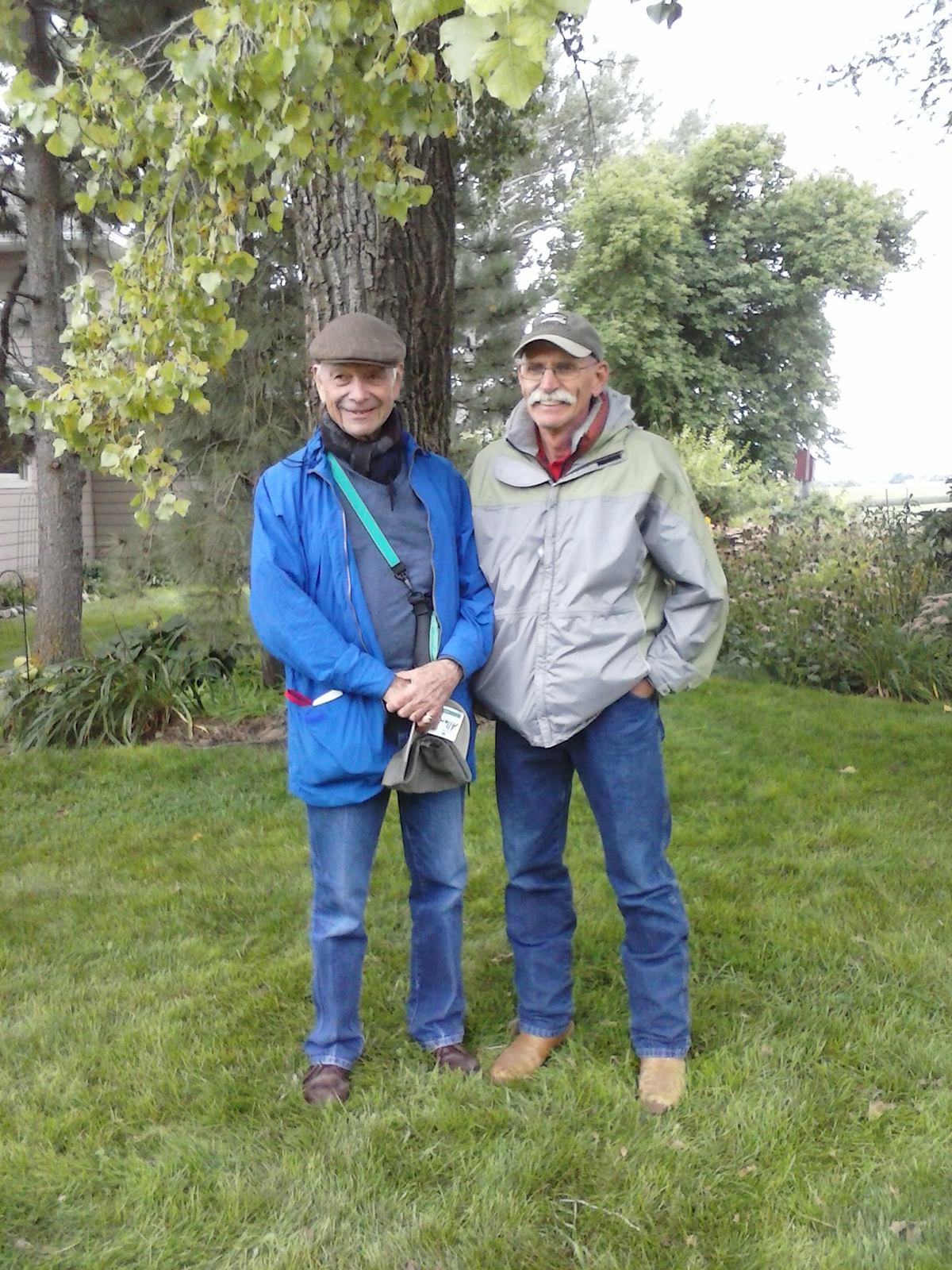 Allan Savory, left, visited Rick Smith, right, at Smith’s farm in 2014, as part of a tour of farming operations practicing exemplary conservation agriculture. Savory, a world-renowned expert on grassland systems and holistic management, resides in South Africa. He was honored in 2010 as a recipient of the prestigious Buckminster Fuller Award for his work solving agricultural and land use problems. Photo courtesy the South Dakota Grasslands Coalition

The evolution of Rick Smith’s land ethic can be summed up as a series of discoveries, with lots of trial and error.

Smith started his farming-ranching career practicing conventional land-use methods that emphasized annual grain production and the ample application of chemicals, before he experienced an epiphany that led to a land management approach that highlights soil health and ecological conservation.

Smith was raised on the place he now owns and manages, in rural Hamlin County, in northeast South Dakota. The landscape there is mostly gently rolling, but it also includes a sizable length of lakefront shoreline and some erodible, steep-sloped topography characteristic of the coteau country he calls home.  His dad planted corn and grains, and had some hay and grazing ground. He also raised hogs and cattle.

Smith is not a young man, but he projects youthful exuberance while recounting his history of learning how to practice conservation agriculture.

Smith was studying agricultural engineering at South Dakota State University when his father died, and with that unexpected passing, he began running the family farm.

“When I started farming in the early ’70s, I did things like they’d always been done on our place and on most other farms,” Smith said. That meant following a monoculture menu, which had him planting about 75 percent of his 1,000-acre operation with annual grains, especially corn. Smith faithfully continued the grain cycle for many years, and when prices for corn rose to an especially lucrative level, he destroyed some of the grassland his dad had restored. “I’m not proud of it,” he said, “but I actually did plow under grasses established by my dad in order to grow more corn.”

That decision—and the regret he now feels—illustrates Smith’s profound, personal journey as a farmer.

“Back then, many farmers—me included—didn’t think about things like soil biology, moisture retention, water quality, and biodiversity like I do now,” Smith said.
“Just about everybody thought that as long as there was some type of cash crop growing on the land that was the right way to manage your land. We all viewed farms as land to be used, and we were all following the quickest route to making money without thinking about the environment. There are still too many farmers who do that.”

Smith also practiced fall plowing in fields where small grains were harvested, though he abandoned that practice many years ago.

“I shake my head at having to admit I did that,” he said. It troubles him that other farmers continue to plow in the fall, exposing soils to severe erosion, evident in the blackened snow in roadside ditches.

Conversations with stewards like Smith typically reveal they possess a hungry intellect, and that includes an appetite to read, study, and learn. They are also willing to investigate new ideas and to ponder unfamiliar approaches, even when those new approaches to managing their land contradict their own way of thinking. It takes a special sense of independence to break free from following long-held farm practices. 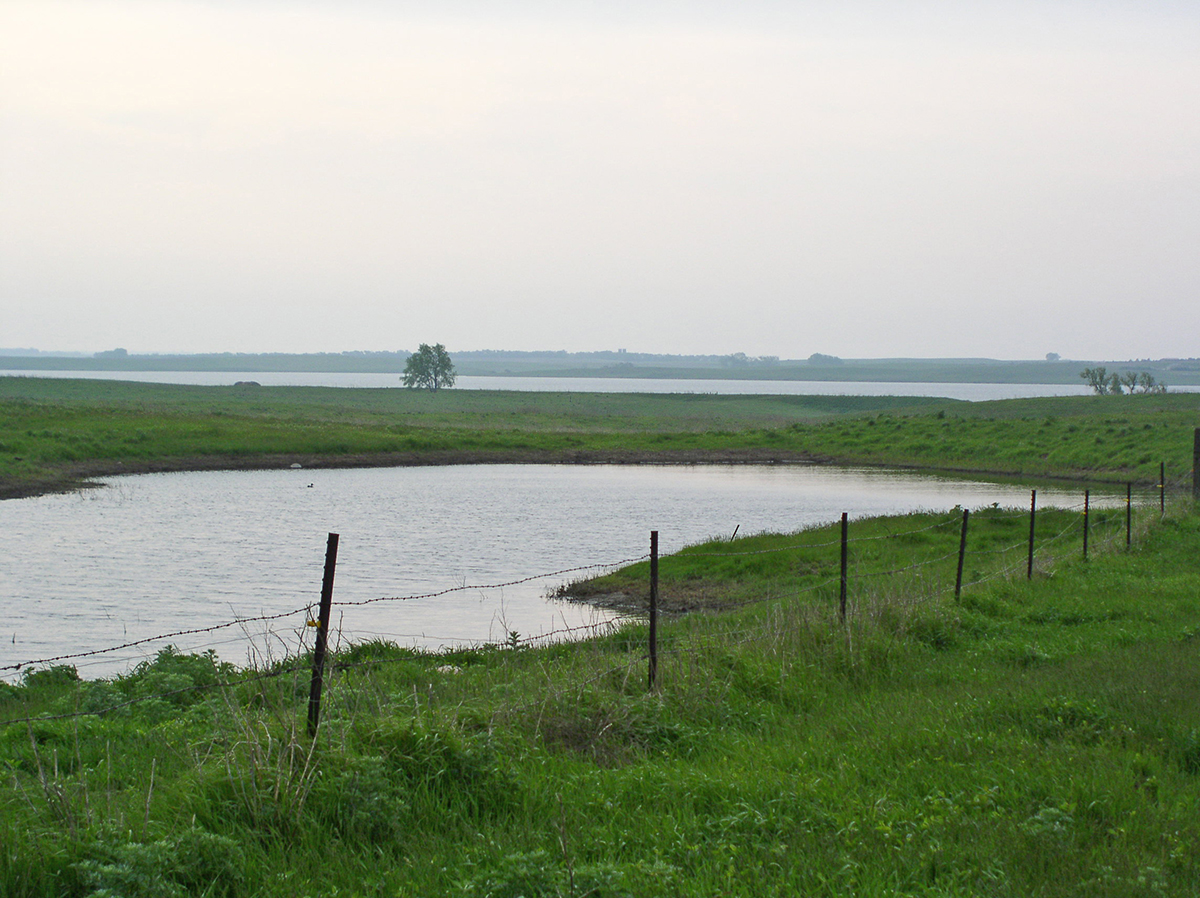 The protection of surface and ground water is an important part of Rick Smith’s agricultural plan. Photo by Rick Smith

The ’80s brought low crop prices, high input costs, and lots of bankruptcies in eastern South Dakota and across farm country. Smith learned frugality, and he started to transition some land from annual grains to perennial grasses, a move requiring fewer chemicals. He needed to reduce expenses, and he did.

In the ’90s, Smith began poring over books written by land-use pioneers Allan Savory and Stan Parsons, and he became aware of different, more sensitive approaches to using and protecting natural resources. He started to second-guess the grain-crop treadmill he’d been on.

He tried planting indigenous grasses like big bluestem. Thanks to the popularity of Conservation Reserve Program enrollment, the native grass seed market proved profitable, and with new prairie to benefit his cattle, Smith paid close attention to Savory’s prescriptions for grazing management, especially an approach called rotational grazing. That changed Smith’s ideas about how to run cattle on his land. The emphasis of his operation began shifting to livestock.

As the new century began, Smith continued to deepen his relationship to nature.

“I came to understand that I’d been farming for a quarter-century, and I had never before paid sufficiently close attention to the ground, to the soils,” he said. “I had overlooked for all those years that the soil is the essential building block for all that lives in and on the land.”

He was disappointed at how little information was available to farmers who were interested in protecting and enhancing soils. “When I approached people studying and teaching agronomy I was surprised when they admitted there wasn’t much available,” Smith said. “It seemed that just about everything being taught was geared toward grain production, and very little of what was being taught considered healthy soils.”

He also embraced diversity, shedding the final vestiges of monoculture and pursuing diverse plant production. “Mono-anything is asking for trouble,” he advised. “The more plant species, the more potential for production in all weather conditions. Diversity also removes the boom/bust scenario that creates disaster for those who don’t practice diversity.”

After a couple decades of carefully re-working his agricultural practices, Smith experienced what he described as his greatest awakening. He’d been exploring remedies for improving soils he’d converted from grain to grass, but was unhappy with his level of success. Then he met Ray Archuleta, an agronomist with the federal government’s Natural Resources Conservation Service. Archuleta had justifiably built a national reputation as an expert on soils, and he tirelessly championed a concept known as conservation agriculture, with an emphasis on soil health and agricultural ecology.

Smith discovered that Archuleta not only presented a philosophical basis for soil protection, he also described in detail useful hands-on practices landowners could implement.

“Soils became the foundation of my operation,” Smith explained. He learned how to use “litter” to protect soil and add biology to the soil. Synthetic fertilizers and biocides were rarely used. As he walked prairie he had created he closely examined and monitored the biological content of the soils, and he realized that the more microbes, worms and beetles that resided in the soil the more productive the soils were.

Smith also paid close attention to how effectively his land could hold water, and he noticed his careful soil management practices dramatically improved his land in that regard. After large rains in the area some of his grain-growing neighbors saw runoff collect in roadside ditches and low spots, while Smith’s land absorbed the rainfall and showed no pooling or erosion. “How can you identify a specific economic value associated with retaining rainfall on your land?” asked Smith. “You cannot. But I assure you it is worthwhile and cost-effective.” 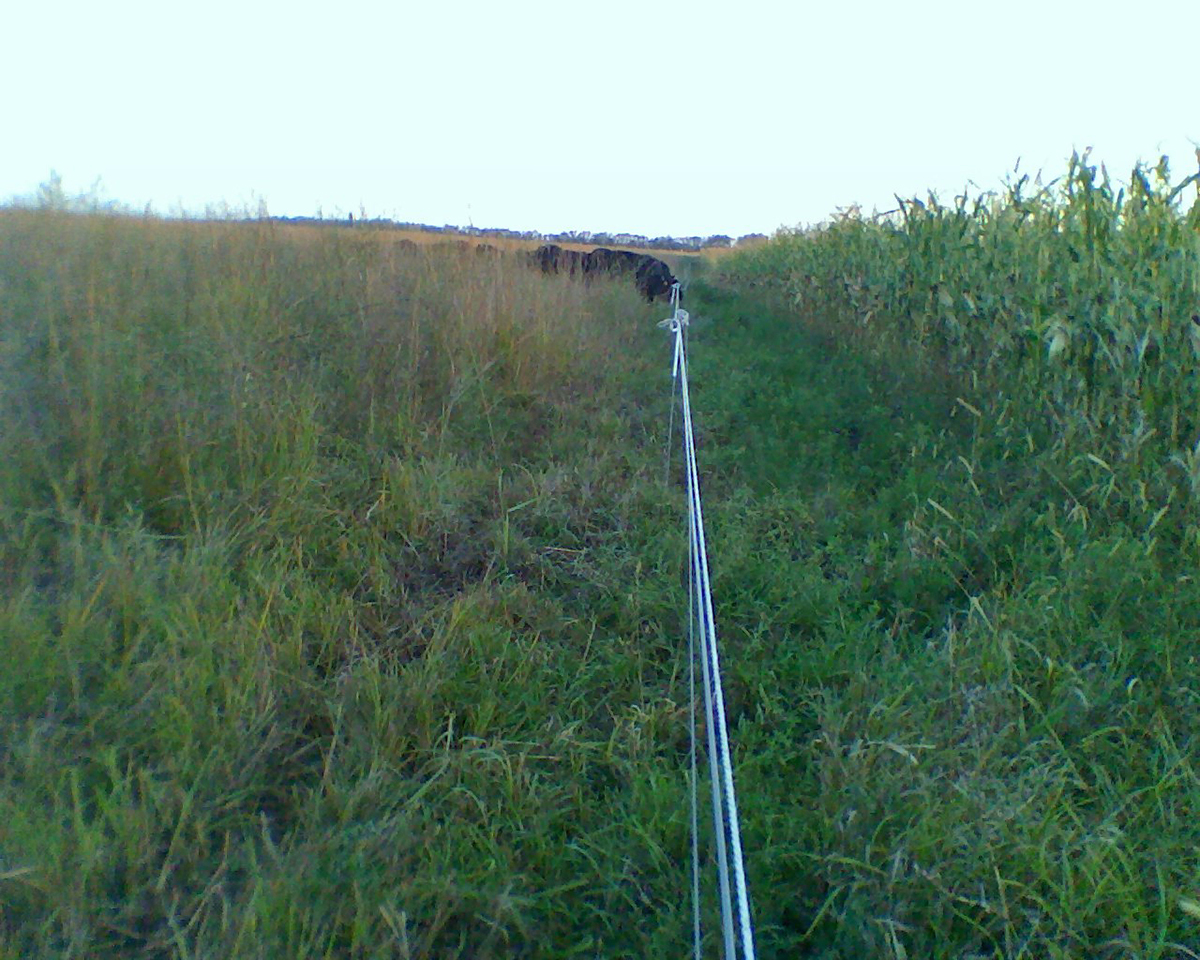 The evolution of Rick Smith’s farm philosophy has flipped his growing choices. When he started in the 1970s his farm was dominated by corn. Now it’s dominated by grass. Photo by Rick Smith

These days Rick Smith’s farm functions in a completely different manner than the farm he took over as a young man. He no longer rents any land, and of the 600 acres on the place 500 of them are planted in perennial grasses; only 40 of them are planted to corn. The commercial component of the enterprise now revolves around plant diversity, and feeding and selling livestock. Smith runs about 100 cattle, as his dad did, but he has added 150 ewe sheep, and up to a couple hundred lambs each year.

“Our farm income now comes from animals,” said Smith. “Everything I grow on the farm—and it’s a diverse mixture of plants, particularly on the grasslands—is used to feed our animals.”  Smith also learned to invest farm profits in non-farm investments. “Diversity,” he explained, “is an applicable principle not only for how I farm and what I grow but also how I manage and grow our money.”

Smith resisted the recent temptation to grow lots of corn: “I’ve seen how that kind of market can ramp up in hurry, and then what? It’s fleeting, and that makes me nervous.” He noted the potent influence of corporate agriculture dictating farming practices. “Corporate agriculture has its goals, but unfortunately those goals don’t always match what the earth can endure.”

He is optimistic about the future of conservation agriculture and grassland farming. “There’s not many of us right now,” Smith observed. “It’s hard for someone to admit that they’ve been doing it wrong for many years, but that’s what I did. Once you start paying close attention to how your farming practices affect your soils and water resources, you can recognize that you need to adjust and change.”

“I’m still studying, still looking for better ideas. My evolution as a farmer is far from over,” Smith said. “I’ll keep learning new things and keep improving my operation. My goal is simple. Not only do I want to pursue what’s profitable, I want to do what’s best for my land, and for the planet.”

communities people Seeds of Wisdom 2015-06-01
Peter Carrels
Share !
Previous: Where is a great Main Street, and what makes it awesome?
Next: Postcard: Growing up in the hotel on the corner of Main
Scroll To Top