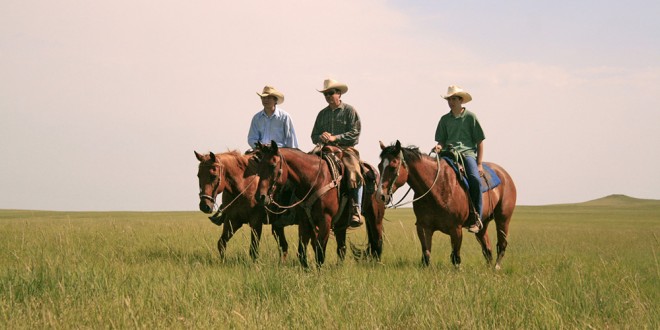 SEEDS OF WISDOM: An island of grass and healthy land

Watch the winds wiggle and bend grasses on an open plain. It’s a rhythmic response on the ground to moving air. This movement, this dance, has been stilled on more than 235,000 square miles of North America. Grasslands have been steadily destroyed during the past century and a half, and that destruction accelerated in recent years as industrial corn and soybean farming spread across the land.

The immediate financial allure of rapidly rising commodity prices, and the ready availability of price supports and yield insurance for grain growers steered many to the process of establishing more and more cultivated fields. 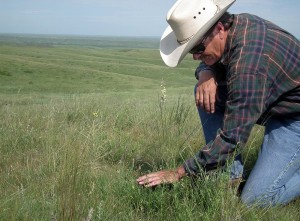 Todd Mortenson on the Mortenson Ranch in Stanley County, S.D.

Not Todd Mortenson, however. A prodigious mantle of healthy grasses still swirls with the wind on the Mortenson ranch. And it’s a big place, more than 16,000 acres, much of it ranging along the Cheyenne River in west central South Dakota, and hosting a herd of cattle that exceeds 1,000 head. Mortenson resists the temptation to grow grains, even though most of the land in his area has been recently planted to corn, soybeans or wheat. His place has become a showcase of conservative conservation, an island of grassy prairie increasingly surrounded by grain fields at this very rural and remote western edge of the steadily expanding corn belt.

Todd is the third generation of Mortensons to caretake this place. His grandfather began to piece the ranch together during the financial depression that followed World War I, when shortsighted land management practices created conditions that caused the Dust Bowl. The ground was in bad shape, and his grandpa was intent on bringing back its health and productivity. That mission captivated Mortenson’s father, too.

“My dad spent his entire life working to repair this land,” Mortenson said, adding that it’s become a family tradition. “I enjoy helping the land to heal, and maintaining and improving the health of the land.”

Only 200 acres of nongrassy cropland remain on the entire operation. The rest of the ranch is grass, pasture, and streamside-riverside areas that include native grass species favored by grazing animals, including cattle. The family is aiming for a grassland-only goal, and “we’re almost there,” Mortenson said.

He noted that soils continually subjected to intensive row-cropping practices require many years of attentive rehabilitation in order to restore soil health. The remaining cropland is currently planted to a special, fine-stemmed grass, and Mortenson views that plant as a steppingstone plant during the transition to the native grasses and forbs that will soon dominate all the ranch.

During his run as manager of the place, Mortenson has boosted biological diversity by returning more native plants, creating more wildlife habitat, and increasing wildlife numbers. He also introduced holistic grazing practices to cattle management. Together, the strategies have created better grass, improved riparian areas, and kept cleaner water in rivers and streams.

“We’re growing plants that are native to the area,” he said, “and we’re basing our grazing practices on seasonal patterns that would have been followed by bison. We’re trying to mimic 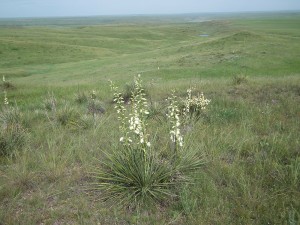 A scene from the Mortenson Ranch

Mortenson watches wildlife diversity to help him understand and gauge the successes of his land management practices. He pays special attention to bees and birds, counting curlews, godwits and grasshopper sparrows as essential residents of the land.

“You’ve got to have a diverse landscape to provide diverse habitat,” he said.

He knows, for example, that long-billed curlews —a larger bird that nests on western prairie—need flat, open ground to guard their nests and young against predators.

“If the flat ground is plowed and planted to row crops,” he said, “you lose curlew habitat, and that means you lose the curlew.”

You hear it in Mortenson’s voice as he describes his ranch, the land, and the responsibility that accompanies owning a large expanse of earth. You hear it in his words and in his expression of purpose. He is humbled and grateful to be a steward of the earth.

Mortenson walks his land or sees it up close from the back of a horse. There’s no noise or mechanical interference as he observes and studies.

“I have a good vantage,” he noted. “If you’re up high and shielded from the elements in a tractor, you can’t notice the details and appreciate the characteristics of the land and wildlife.”

The summer of 2014 was a good one for grasslands on the Mortenson ranch.

“Our place is on the western edge of the mixed grass prairie region,” he said. “But last summer the place looked like it was covered by tallgrass prairie. This was one of the best years I’ve seen. Moisture was ample and timely, and temperatures never got too high. And it was oddly humid much of the summer.”

Just as prairie grasses grew high and thick, so too did local corn yields boom. But corn prices fell dramatically at the same time as field production soared.

“Not only does the farm bill protect grain farmers from failing, and going broke, it allows them to take risks,” Mortenson said. “The farm bill creates an unfair playing field in agriculture, and it can also encourage a glut of grain, forcing taxpayers to help subsidize overproduction and grain storage.”

Those risks, he makes clear, are not just financial. “Consider the unsustainable practices some cropping practices inflict on the land,” he said. “Those are real risks posed to soils and resources.”

As grain prices cycle downward, Mortenson predicts more land in his area will be planted back to grass. It’s a tendency dictated less by stewardship than economics, and that’s an emphasis he would change.

“If land is replanted back to grass, it should not be allowed to be broken again. Some of the land in my neighborhood has been broken three times in the past four decades. This back and forth between grass and grain is hard on the land. Plus, how many times should the taxpayer pay for land to be planted back to grass?”

In 2011, the impressive stewardship practices followed on the Mortenson ranch were recognized by the Sand County Foundation when the Mortenson family accepted the prestigious Leopold Conservation Award for South Dakota. More than 1,700 ranches and farms were eligible for the award, making the recipient all the more noteworthy.

The Mortensons have steadfastly adhered to a grassland-ranchland philosophy through decades of economic and agricultural turbulence in the world around them. They have relied on land stewardship, biodiversity and hands-on hard work to make their operation profitable. Those sound like new-fangled values in this era of GMOs, big iron, neo-nic seeds, monoculture specialization, and mechanized synthetic fertilizer applications. But the landscape that supports the Mortenson ranch is a remnant landscape, an old-fashioned perennial prairie. It needn’t be replanted each year. Chemical use is minimal. Some of the prairie is restored, and some of it is truly native. But all of it is beloved by its owners. And that’s the depth, scale and scope of a land management and agricultural philosophy we need more of. That’s the type of farming-ranching practice that’s not trendy, nor should it ever be out of fashion.