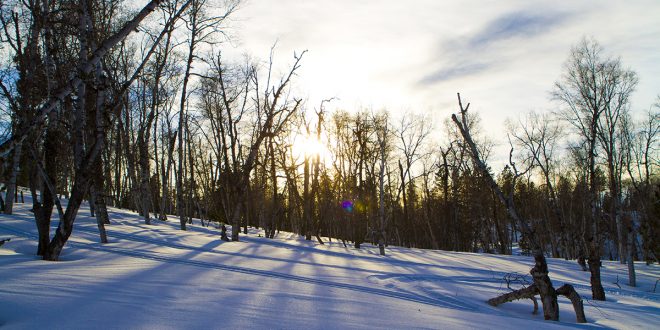 Snowmobile tracks cut through the shadows cast by barren aspen and birch trunks in the winter sunset at Trailshead in the northern Black Hills of South Dakota last February. Photo by Nicole Heitzman/Special to Dakotafire Media

The potential in Dakota winters

Tourism is big business in the Dakotas, and access to outdoor recreation is among the top reasons people come to visit—and, in many cases, to stay.

Visitors flock to state and national parks for activities such as fishing, hiking, climbing and biking during prime tourism season—generally considered Memorial Day to Labor Day—with considerable, yet smaller, numbers of tourists coming during the month-or-so “shoulder season” on either side of those times.

And, the rest of the year? Well, it tends to have a bad reputation. Think the window-scraping scene in the movie Fargo.

But what if there is untapped potential in our Dakota winters? Could we change weather from being a deterrent to a plus when we’re recruiting top talent to move to the Dakotas?

If we considered the Dakota outdoors a year-round recreational wonderland, then how would that change how we tell the stories of rural Dakota communities, where we have easy access to the outdoors?

Outdoors: An asset in recruitment

She and her assistant regularly fielded questions from prospective new residents. “Almost every time, the final deal-making or deal-breaking question had to do with the availability of outdoor amenities,” she said.

Biking trails, fishing options and the Dakotas’ famous Chinese Ringneck season were among the more sought-after draws, but the Dakotas offer a plethora of wintertime draws, too, such as snowmobiling, snow skiing and boarding, and ice fishing.

The land of infinite variety “gives us a competitive advantage,” Johnson said, “but in an understated way. We use it, but I think we could use it better.” 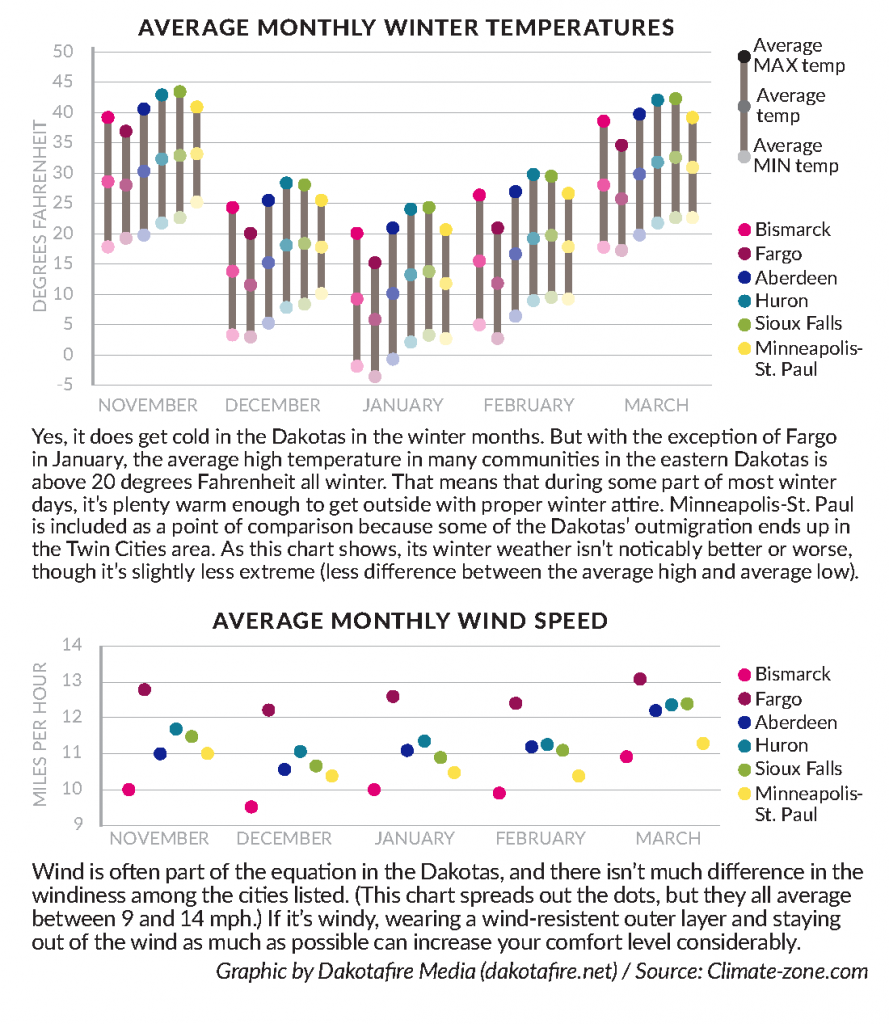 That depends on what you consider “cold” and where in the Dakotas you are.

The National Weather Service defines winter as January through March. According to their statistics, the “warmest” Dakota city on average is Rapid City (average high 37 degrees Fahrenheit and low 12 degrees Fahrenheit). The coldest is Fargo (high 19 and low 1).  Bismarck and Aberdeen are equal (high 24, low 4).  Sioux Falls (high 27, low 7) is somewhere in the middle.

For the person wanting to enjoy winter in the outdoors, the temperatures on most days, combined with use of today’s modern winter clothing, are safe and comfortable.

Winter recreation doesn’t get much promotion

“The majority of our budget is spent  from early May through late September,” Goodman said. “The first forays outside of peak season were activities in the ‘shoulder seasons’ immediately adjacent, such as pheasant hunting and the popular Buffalo Roundup at Custer State Park. The winter spending we do now is ‘co-op’ matching funds for Deadwood and Sioux Falls.”

Goodman says there are some co-op ad dollars available for rural community winter events.  She also added that South Dakota doesn’t break out promotional costs for winter activities nor revenue from specific winter actives except for snowmobiling and skiing.

“The bulk of our visitors come from Minnesota and Wisconsin.  We have several different co-op advertising opportunities, many targeted at more rural communities,” according to Mike Jensen, outdoor promotion manager for North Dakota Tourism. “We do sports shows throughout the Upper Midwest,” Jensen said. “One thing we do is provide opportunity for smaller communities and ‘mom and pop’ guide services to ‘buy in’ to our booth and come on the road with us.”

Jensen points to Harvey, N.D., a small town about an hour north of Bismarck, which looked at resources they had at hand and realized they were home to a large, healthy wildlife production area full of pheasants. They “bought in” with the tourism department and traveled to a sports show in Minneapolis. A southern Minnesota newspaper picked up their story, which was then shared with other newspaper readers in that region. Harvey saw a significant bump in tourism the following fall.

Don’t discount what you have to work with right in your own back yard, Goodman advised. 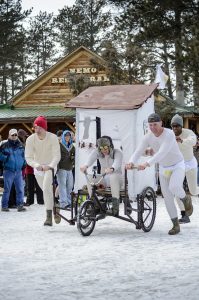 Participants go all out in building outhouses for the big race at the Nemo 500 in Nemo, S.D. Contributed photo

An example is in Nemo, South Dakota, a small community in the northeastern Black Hills. The Nemo 500 is a race on snow  between outhouses mounted on skis. The event has a become a quirky destination that now raises over $10,000 a year for charity.

“Another example is the 28 Below Fat Bike Race in Spearfish Canyon coming in March 2017, which challenges riders of the currently trendy ‘fat tire’ bicycles to ride up and down the canyon using established snowmobile trails,” Goodman said.

She added that the S.D. Department of Tourism recognizes the need for more hands-on assistance from her department to individual rural communities, and she hinted plans for that are in the works.