If two heads are better than one, the result of the collaborative hopes and dreams of hundreds is nothing short of amazing. 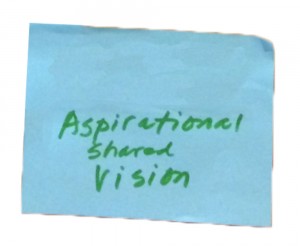 In just over six weeks, the community of De Smet, S.D., raised just over $3 million to make the collective vision of most of its 1,000 residents a reality. In early 2012, a local business approached the De Smet Development Corp., asking for a wish list with which it could help, as a thank-you to the community that had supported the business for the past 100 years. Major plans on a “20-year dream plan,” according to Development Coordinator Angie Baszler, included a new community center and a sports complex. 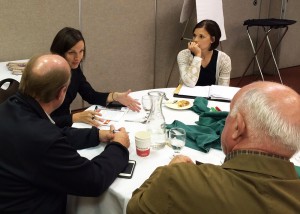 Angie Baszler tells her story of a community coming together to Craig Schroeder, Becky Hubsch and Milan Wall.

“We currently are having weddings in an old gymnasium with no air conditioning,” Baszler said.

“Just like most small towns, we have weddings with 500-plus people, (so) we needed some sort of nice venue. … We also had a track that was not regulation size and a football field that was old.”

“We really invited people to be partners with us on this project, and share their dreams and visions with us, and then invest in (them),” she said. “It really took a lot of meetings and a lot of hard work and a lot of volunteer hours to shape this into something really incredible. … I think that if you’re willing to keep an open mind and try to reach for the stars, you’ll get there.”

Early on, the group decided to raise as many of the funds as possible, to avoid placing the cost burden on taxpayers for the city-owned property. It was decided that financial pledges could be made for specific parts of the project, so residents could see their biggest dreams come to fruition.

The fact that millions were raised in a community of 1,000 that also was in the midst of a refurnishing fundraiser at the local hospital was beyond the economic development corporation’s wildest dreams.

“When we sat around that table (for the initial planning meeting), we thought there’s no way we’d come up with even $2 million … (but) we said, ‘Let’s try it anyway,’” she recalled.

“By the end of 2012, we had raised well over $1 million, and this thing became possible,” Baszler said.

More than 930 people contributed financially to the project, which includes not only a community center and sports complex, but also a theater, and is set to open in June 2015. The entire 22,837-square-foot complex is situated across the street from the city-owned park, in the heart of De Smet.

“We have this incredible ‘central park’ feel, where during football games, we have kids playing at the park, or (playing) baseball games or whatever,” said Baszler. “We have this really cool feel that small towns are known for.”

Although the coming-together of the community to fund something beyond most people in De Smet’s wildest dreams—with a majority of the funds raised in under two months—may seem like a fairy tale, it did not come without a few hiccups. In early 2014, the project went to bid with the assumption that all funds were secured. But the bids came in $1 million higher than expected.

“We felt like we had raised everything we could possibly raise,” said Baszler. “When you have people giving to different areas within the building, it’s not like you can just cut off one function, because they’re all a very important part of the center, and by cutting that off, you could possibly be cutting off the funding source of that as well.”

So, instead of giving up, the group worked even harder, reducing costs through value-added engineering and finding alternate suppliers for some of the materials. Two days before the City Council was scheduled to approve the project, however, supporters were still $500,000 short.

“The leaders of our community got together, and within 24 hours … all but about $15,000 was raised,” said Baszler. “That last little bit came in right as (Economic Development Director Rita Anderson) was walking into the City Council meeting. She got one phone call, and then one gentleman at the city council meeting said, ‘I’ll fund the last amount,’ and then the City Council went ahead. The day before, we were all doom and gloom, but the leaders stepped up … and I think some of them just reached a little deeper in their pockets, because this was a project they were passionate about and they believed in, and they made it happen.”

Without all 931 donors, Baszler said, the De Smet Event & Wellness Center and Sports Complex wouldn’t be set to open in just a few short months, with just a $500,000 fundraising campaign to purchase theater seats, wellness center equipment and other furnishings and supplies still to go.

“Every single gift in this mattered,” she said. 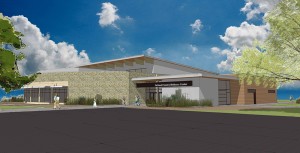 The concept drawing of the De Smet Event & Wellness Center. 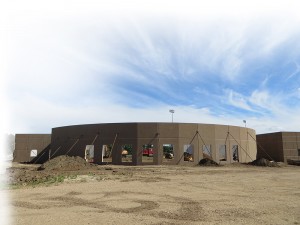 The progress on the building, as of September 2014. Image courtesy Rita Anderson