Print This Post
On a sizeable piece of productive Midwestern farmland between Sioux Falls and Brookings, S.D., a small group of agricultural pioneers are growing diverse mixtures of indigenous, perennial grasses. They have two motivations: create and manage a farm that balances economic returns with meaningful environmental protections, and demonstrate that a farmer can make a living marketing products emanating from native grasses grown on premium land previously devoted to churning out industrial grains.

Planting prairie for profit: EcoSun Prairie Farms aims to show that they can balance environmental and economic needs by farming grass 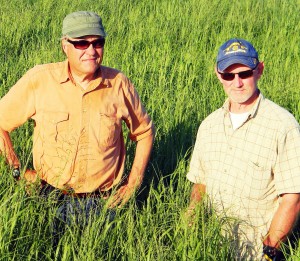 Carter Johnson and Arvid Boe, both professors at South Dakota State University, stand among the perennial, native grasses growing at EcoSun Prairie Farms, located south of Brookings. Johnson and Boe are among the team of scientists that founded EcoSun Prairie Farms in 2008, and both continue to oversee research and operations at this agricultural demonstration project. Photo by Pete Carrels

Don’t look for corn and soybeans at EcoSun Prairie Farms.

On a sizeable piece of productive Midwestern farmland between Sioux Falls and Brookings, S.D., a small group of agricultural pioneers are growing diverse mixtures of indigenous, perennial grasses. They have two motivations: create and manage a farm that balances economic returns with meaningful environmental protections, and demonstrate that a farmer can make a living marketing products emanating from native grasses grown on premium land previously devoted to churning out industrial grains.

After four years, the restored tallgrass prairie on this 640-acre demonstration project prospers, and an adventurous notion to profitably operate such a farm might be proving out.

The need to preserve disappearing tallgrass prairie, which once stretched from Canada to Texas and from the Dakotas to Ohio, gives impetus to the project.

“We’ve lost 99.5 percent of the tallgrass prairie,” explained Dr. Carter Johnson, a researcher and professor at South Dakota State University, and the leader of EcoSun farm. “We’ve also lost the benefits to society of an ecosystem that sustained many generations of humans. Indigenous grasses and flowers not only provide sustenance, but the processes associated with tallgrass prairies help build soils and protect water resources. Without functioning prairie, healthy land and water resources are compromised.”

Typically, tallgrass prairie survives or is restored on marginal lands or in small parcels that are treated like precious heirlooms or wildlife sanctuaries. Places like the fields at EcoSun farm are typically off-limits to prairie restoration because growing corn or soybeans is the conventional approach to using the region’s most fertile lands.

“This isn’t a nature preserve,” emphasized Johnson. “This is a working farm with an on-site manager that grows grass instead of corn or soybeans. We’re conducting this experiment on a farm that was once row-cropped and produced good yields. We want to prove that a farmer can make a decent living by growing native grass.”

Johnson and a group of university colleagues launched EcoSun farm in 2007 after many discussions about how to balance economic goals and environmental values in agriculture. They dreamed about tallgrass prairie reborn in the section of the Corn Belt that lies on the western edge of the historic tallgrass region.

The land now occupied by EcoSun Prairie Farms had not only been regularly planted to grain crops, it had also been routinely treated with farm chemicals and inorganic fertilizers. Plus, some 30 wetlands on the farm had been drained. The restoration process followed by Johnson and his associates required careful practices, study, and calculated tactics. Burns were employed on some parts of the property. Early on several fields were sprayed with herbicide to destroy weeds associated with tillage farming. Some grass seeds were drilled and some were spread. Harvest practices involve traditional and inexpensive machinery, and harvest has taken place in late summer, when biomass is at or near its peak. Nearly every slough and pothole has been resurrected, and these wetlands not only produce farm income, they also serve wildlife and function to aid flood storage, water purification, groundwater recharge and as a source of stock water for livestock.

Within three summers EcoSun’s fields were dense with dozens of flourishing native plant species. Plant diversity is a strength of the farm, not a liability. The restored, healthy ecosystem is signaled by many types of wildlife. Birdsong and the buzzing of insects are almost deafening. Dragonflies dart about everywhere. Ducks move from one wetland to another. Frogs croak; a heron squawks. There are bobolinks in the grasses and bitterns in the reeds. The land feels natural and healthy.

“The minute you plant grass, the advantages begin to accrue,” he explained. “Preventing soil erosion is a primary advantage. Tillage or even no-till have higher erosion rates than perennial grass farming, and this is especially true when you compare conventional tillage. There’s less runoff on the grass farm, and that means the water stays on our land and moves through our plants, and it won’t be running off and carrying soil into surface water. That also means soil fertility is protected, and so is surface water. Grass farming also protects groundwater because you use few or no fertilizers and biocides. Everything you look at that has any connection to the environment is better off with grass versus row crops. The main thing is that we’re bringing the natural ecosystem back.”

Restoring the property’s wetlands is a goal that complements the pursuit of tallgrass prairie. According to Johnson, “The main reason eastern South Dakota lost so many wetlands was the urge to spread corn from fence row to fence row. Corn growing and wetlands are not compatible. But growing wetland grasses such as prairie cordgrass is very compatible with certain types of wetlands.” Research at EcoSun farm is determining which grasses or combinations of grasses best benefit from the farm’s various wetland environments.

Finding profitability through many income sources

The biggest challenges to demonstrating the viability of EcoSun farm, said Johnson, relate to public perception and economic issues. “Many people,” he explained, “believe that land left in grass is land not used to its fullest. Of course, we believe such a viewpoint needs to change. Just as important, we’re hoping to prove that a farmer can make a living with grass, and that a farmer doesn’t need easements, CRP or price supports. We’ve also learned that a farmer must be very entrepreneurial to make a grass farm work financially. You have to have multiple income streams, just like traditional farms had.”

Those income streams include the sale of native plant seed, native grass hay, and grass-finished beef.

Seed is marketed though Milburn Seeds, a Brookings company, and the best-selling varieties have been switchgrass, cordgrass, lowland sedges, and wedgegrass. Revenues from seed sales remain the top component of the EcoSun balance sheet.

EcoSun’s hay is sold to cattle producers, hay auctions and aggressive buyer-sellers. More than 500 tons were sold last year, and hay sales should continue to be a huge part of the farm’s profitability.

Interest in EcoSun’s beef is evident after sales and marketing efforts were launched in 2011.

Rising public awareness about the need to consume healthier foods will likely propel interest in grass-fed beef, including EcoSun’s native grass-fed beef. Not only is grass-fed beef leaner than grain-fed beef, the beef raised at EcoSun farm avoids antibiotics, hormones and other chemical additives. Compared to the meat yielded by other grass-fed cattle, EcoSun’s beef benefits from a herd consuming a diet of native grasses and flowers, and this special blend of plants creates a richer, fuller taste.

“We are finding,” reported Johnson, “that our customers appreciate knowing that our forage is unique among grass-fed beef producers in the area, and that it produces a distinct, satisfying flavor. They also appreciate knowing where their beef was raised, that congested feed lots are not part of our beef-producing process, that our beef is leaner, and that it provides higher healthy fats (omega-3 fatty acids). EcoSun customers realize that buying EcoSun products helps expand native grasslands, and this provides long-term benefits to society.”

Currently, EcoSun markets its beef through Pomegranate Market, a health-minded grocery in Sioux Falls. The Cottonwood Bistro, a Brookings restaurant, serves a variety of dishes featuring EcoSun’s beef. Efforts to broaden availability through retail outlets, restaurants and other opportunities are under way.

Energy production looms as a potential market, and research efforts in concert with POET have been conducted. Cellulosic applications have promise, but conversion of cellulosic materials such as native grass hay into fuel is occurring only at the pilot plant stage. Johnson expects this market will contribute to EcoSun’s income stream in the near future.

Another advantage grass has over grains is that the expenses incurred by a farmer growing perennial native plants are dramatically less than expenses related to growing corn or soybeans. Preliminary analysis shows that input costs for EcoSun’s grass farming have been about one-third of those for row crop farming. Though grain sales are now offering historic profits, prices for grains will probably moderate, and EcoSun’s marketing will improve, leading to a narrowing of the current profit differences in the two farming systems. Grass farming could attract extra attention as a genuine alternative approach to farming when that occurs.

As EcoSun operates during its fifth year, Johnson and his colleagues remain openly optimistic. Prices for grass-based products have been excellent, prairie plant growth on the farm is robust, and contributing to environmental protection adds great satisfaction for the team overseeing the farm and the research happening there.

This style of farming, Johnson emphasized, is based on cooperating with and contributing to natural conditions, rather than subduing or depleting them. “We are seeking a balance between earning profits and sustaining resources, and on EcoSun Farm pursuit of both of these important objectives has been successful.”

To learn more, visit the EcoSun Prairie Farm website at www.ecosunprairiefarms.org. A film about the project is available for order at the website, and presentations to groups about the farm can be arranged.

*Editor’s note: A shorter version of this article appeared in the Summer 2012 print issue of Dakotafire. During the course of working on this story as a freelancer for Dakotafire, Pete Carrels was hired by EcoSun Prairie Farm. Had Dakotafire been aware of that, the story in the print edition would have included that information.