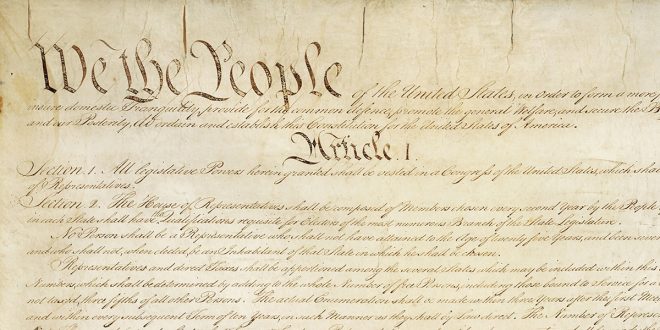 We the people … apparently have some work to do

The one thing people seem to agree on this presidential election season is how awful it is.

They look at the candidate from the other party, or from both major parties (who are both disliked by significantly more people than view them favorably), or at all four candidates on the ballot, and wonder how the pickings could be so poor. People might say something like, “Hey, who’s running this show, anyway?!”

The U.S. Constitution set up a system in which “We the People”—not kings, not dictators—run things. Much of our patriotism focuses on the rights that belong to us as citizens, including the right to vote. But there are also responsibilities that belong to us as citizens, including the responsibility to vote. We can’t say we govern ourselves if we don’t actually do the work of governing ourselves—and, in a representative democracy, that means voting. (Including, if the choices are terrible, finding ways to make the system more likely to produce good candidates.)

In a nation where only a little over half of the people who could vote did so in 2012, apparently not everyone takes that responsibility seriously. “People think they have more responsibility to mow their lawns than to vote,” one participant said during the Summit on Civic Education & Engagement in Pierre, S.D., in June.

Participants at that event, which was sponsored by the Chiesman Center for Democracy based in Rapid City, saw a variety of factors that are decreasing civic engagement. They also discussed a variety of ways to get more of “We the People” involved in the job of running this country. We used that discussion as a starting point for the reporting that follows. 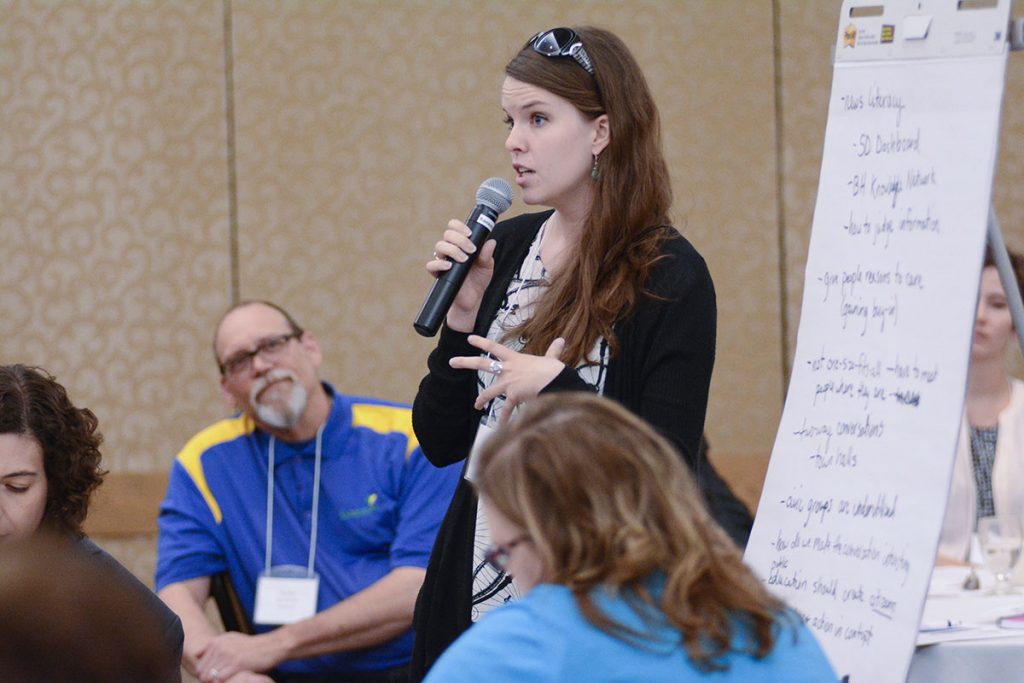 Voter turnout has a lot of room to improve.

By one measure, we aren’t doing too bad in the Dakotas in terms of voter turnout. North and South Dakota ranked 10th (45 percent) and 11th (44.9 percent), respectively, in voter turnout in 2014, according to FairVote.org. That’s better than the national average of a 35.9 percent, which was the lowest it’s been in a midterm election since 1942.

But both the Dakotas’ and the national statistics are terrible compared to the voter turnout numbers for the most recent major elections in other developed countries. At least 22 developed countries had turnouts of 60 percent or higher in 2014-16, according to the Pew Research Center.

(We will likely have a higher turnout this year, since more people vote in presidential elections. Turnout in 2012 was about 53 percent.)

And South Dakota has a clear problem spot: Young people (ages 18-30) aren’t voting. Plenty of them register, but they don’t show up at the polls. In 2014, only about one in five 18- to 30-year-olds actually voted. 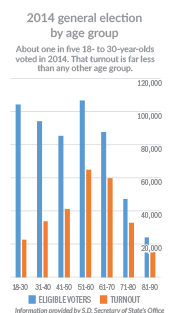 In 2012, they did a little better—36.4 percent, according to the Council of State Governments Knowledge Center. But they were beaten by the national average for 18- to 29-year-olds (45 percent) and the turnout rates of South Dakota’s neighbors, North Dakota (51 percent) and Minnesota (58 percent).

“We’re getting beat” both regionally and nationally, said South Dakota Secretary of State Shantel Krebs. She’s said that to some of the students she’s visited when she’s attended high schools to talk to students about the importance of voting. 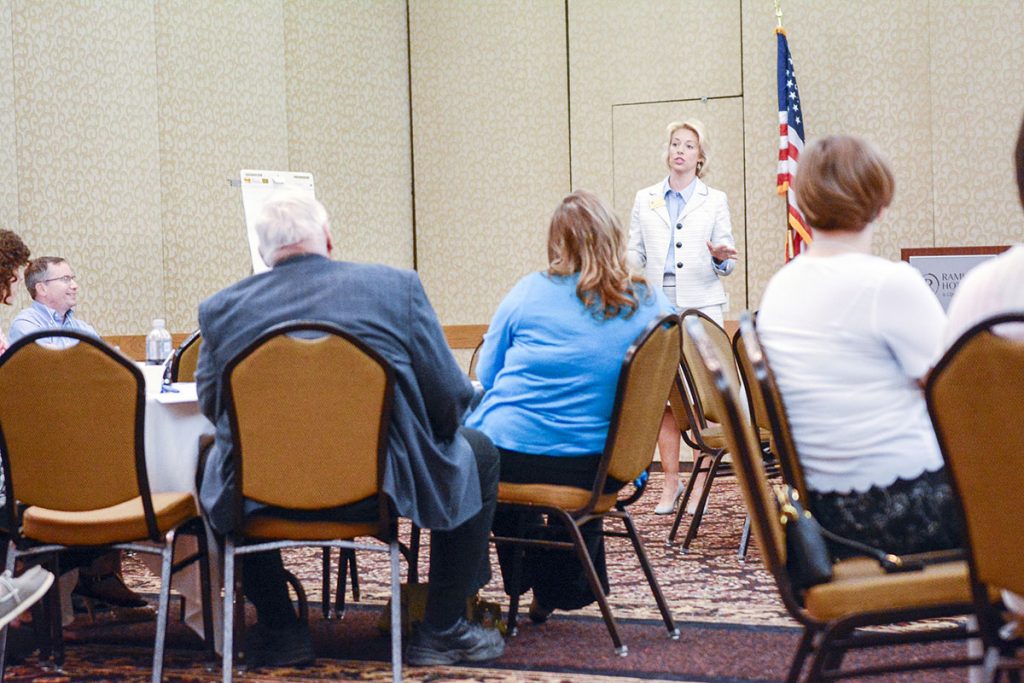 Most of us don’t trust the government.

Krebs, who spoke at the civic engagement summit, said she asks the students if they are registered (most of them who are of age are) and whether they are planning to vote. Those who said they weren’t planning to vote had two common answers: They don’t think it matters, and they don’t trust government.

In a later interview, Krebs said she hasn’t asked them for more details about what they mean by that lack of trust, so she’s not sure if there’s some fear that their votes won’t be counted (in this talk of “rigged elections” this year). But, if these young people are anything like the rest of the country, the lack of trust in government has been around a lot longer than this election season.

Trust in government is at one of the lowest points since it started being measured in 1958. “Only 19% of Americans today say they can trust the government in Washington to do what is right ‘just about always’ (3%) or ‘most of the time’ (16%),” according to the Pew Research Center. Trust in government was at its highest (77 percent) in 1964. Except for a jump up to 60 percent right after the Sept. 11, 2001, terrorist attacks, trust in government hasn’t broken 50 percent since 1973.

This probably isn’t unusual in a country that is increasingly partisan.

This increasing animosity about the “other side” is likely at least a partial cause of one trend that the participants at the civic engagement summit in June said they noticed: Politics is often nasty.

Of course, this isn’t unprecedented. It doesn’t take a deep dive into history to unearth some of the jaw-dropping insults that were lobbed across the aisle in the nation’s early years, not to mention duels. But former legislators speak of a time not too long ago when Democrats and Republicans ate at the same lunch tables and socialized together after hours. Those connections across the aisle are all but gone today.

One other factor that feeds this animosity is that people are limiting their news sources. Participants at the civic engagement event were asked where they got their news. The most common answer? Facebook.

Facebook can help people stay connected over distance, but it can also keep people from hearing other viewpoints, as people tend to select friends that are like themselves.

When there are no positive emotions about the other side—just fear and anger—playing hardball is easier. One participant at the summit said he had told his neighbors he was running for office, and their response was, “Why would you put yourself through that?”

That limits the kind of candidates who want to run for office. And we end up right where we started this article, with slim pickings and frustration all around.

So, what can we do about it?

Read some strategies in the rest of the stories in this issue. 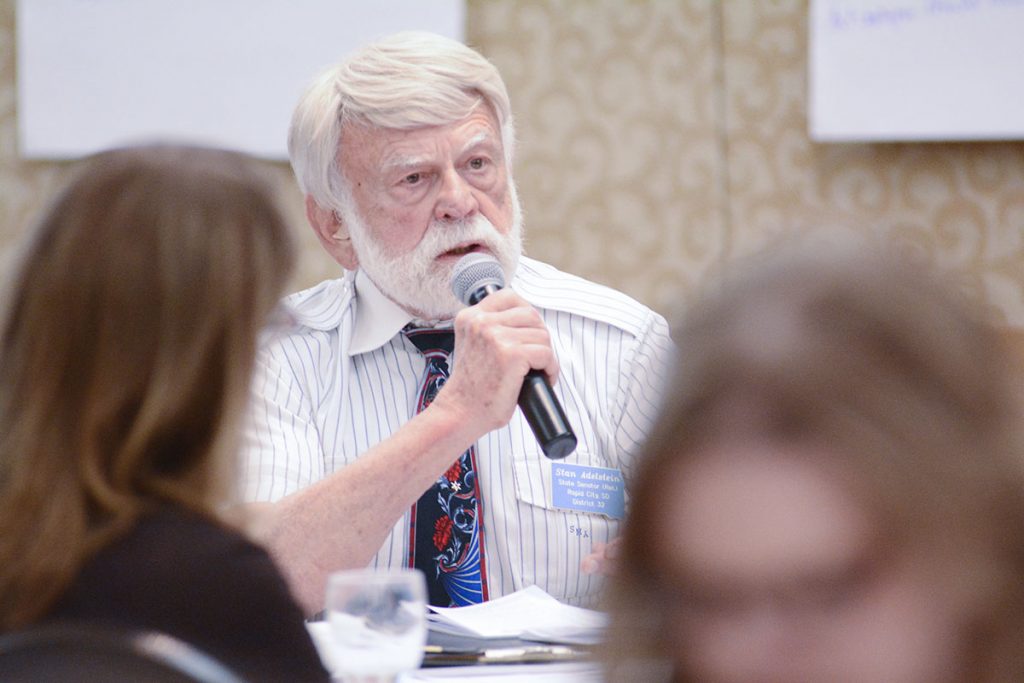 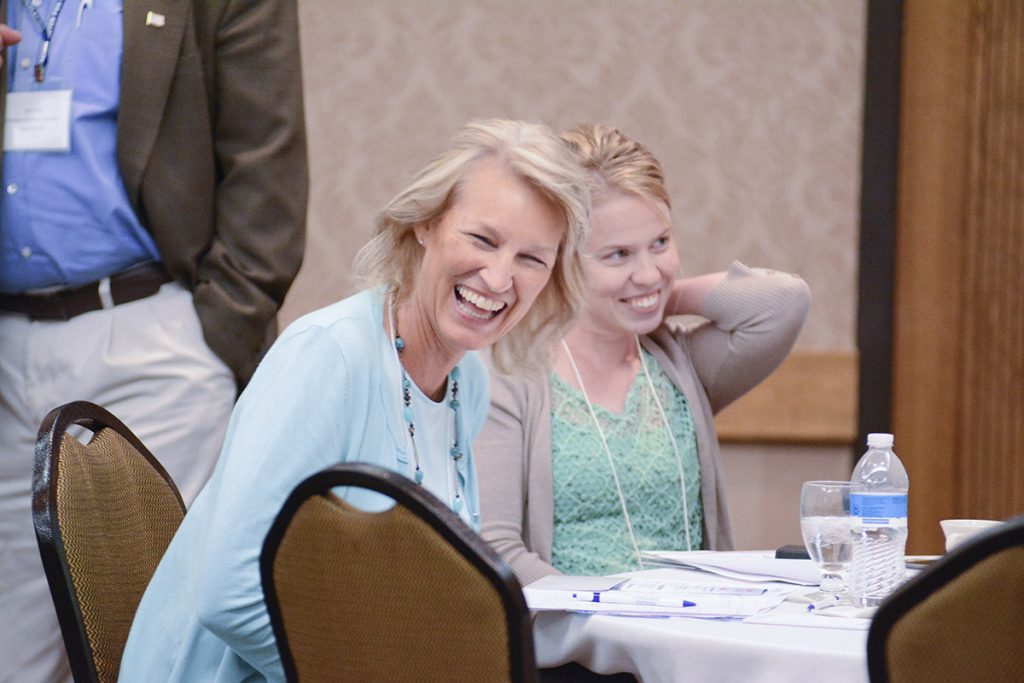 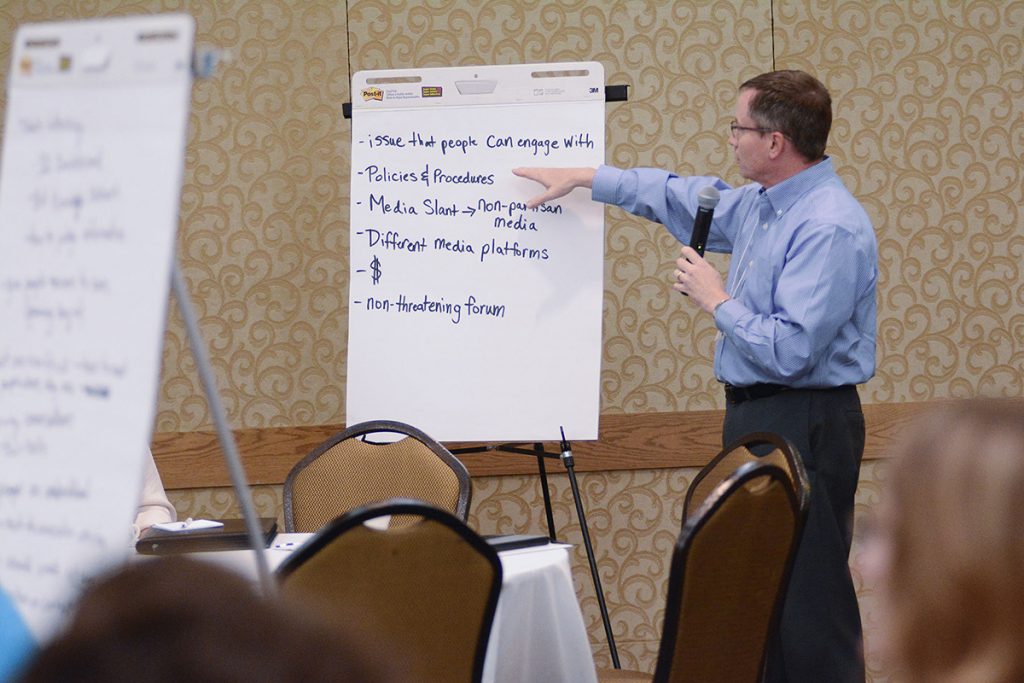 2016-09-17
Heidi Marttila-Losure
Share !
Previous: Many groups are working to help voters
Next: Book describes the business of ‘We the People’
Scroll To Top