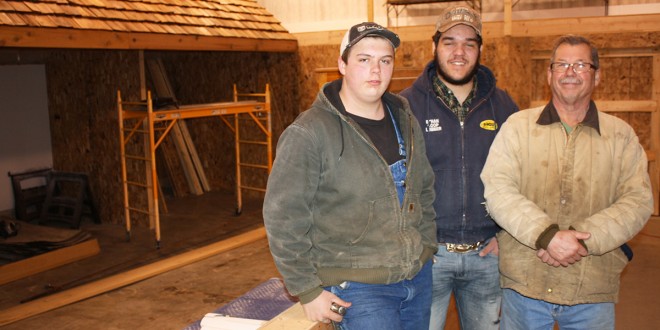 After the Ethan town hall was completed, the Ethan Historical Society expressed an interest in occupying a portion of the building that incidentally was a huge part of the history of the community and the state.

A ramp that once bore the traffic of cheese being loaded out of South Dakota’s oldest cheese factory now is the walkway through generations of memories sectioned into themed “cubbies” made to look like storefronts of old buildings along a typical small-town Main Street. Tin siding from the city’s former shop building was removed when the building was sold, and now lines the upper walls above the cubbies’ shake-style awnings. Each cubby, once finished, will be lined on either side with old-style wooden house siding, and the back walls and contents of each section of the museum will work together to give the “feel” of whatever theme that cubby is meant to portray—education and religion, among others.

So far, roughly $15,000 has been invested into the museum by the Historical Society, on which Schoenfelder said construction is 80 percent complete. A town-sanctioned advisory board handles expenses for the space, with the organization’s money.

While the labors of some local businesses have been utilized in finishing the museum, Randy Schoenfelder and grandson, Tristan Scott, 15, along with 17-year-old Lance Bruske, have done much of the work.

“(The museum) gives (local youths) an opportunity to learn,” said Nancy Schoenfelder, Randy’s wife and a member of the Ethan Historical Society, which began with three members after the community’s 125th anniversary celebration in 2008 and recently has grown to eight members.

Once the project is complete, Nancy Schoenfelder said, the local school will work with the Historical Society to enhance its educational programming and strengthen the community as a whole.

“It gives the opportunity to our young people to learn the history of the town,” said Schoenfelder. “When you know the history of your town, you take pride in it. If you don’t know anything, you’re not going to take any pride in it or invest in it. The whole point of the museum is to generate that interest.”

Scott, who drew the initial storefront sketches based on his grandmother’s vision, agreed.

“Ethan’s past shouldn’t be forgotten,” he said. “We better preserve it before we lose it.”