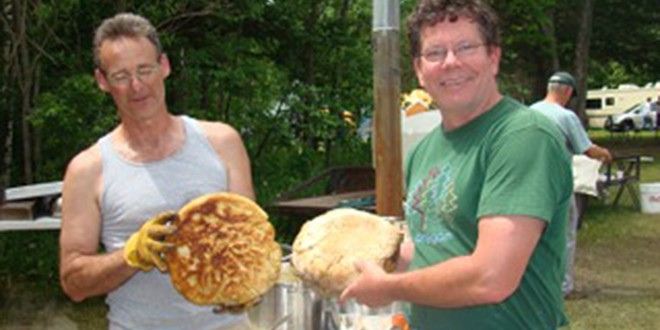 As the harvest season begins, Dakotafire Media is challenging people in the Dakotas to go local.

From Sept. 6-19, participants in the Local Food Challenge will eat locally produced food and share their experiences online.

Those willing to bite can choose from two levels of participation. In the Local Basic challenge, participants must eat all fruits and vegetables from local sources for 14 days. The second level, Local Hardcore, has participants eat all local food for 14 days straight, except seven items that may not be available locally. Suggestions for these “trade items” are salt, coffee, chocolate, bananas, or whatever participants think are essential but not grown in the Dakotas.

Participants can get an “I Went Local” T-shirt and a new experience to share with their communities. They also may find unexpected benefits.

That’s what happened when one Midwestern man participated in a similar challenge, but took it to an even higher level. Dr. Steve Dahlberg advocates for local food as the leader of the extension program at White Earth Tribal and Community College in Mahnomen, Minn. But when a fellow advocate suggested he and other community members “put their mouth where their mouth is” and eat food sourced from only 5 miles around them, most thought it was a crazy idea. Eventually, he and seven other participants gave themselves a more manageable radius of 250 miles and kept it local for one year.

For that time, Dahlberg almost exclusively ate locally produced items that suited his taste. He enjoyed “rabbit, venison, lamb, beef, pork, and a nice variety of meats,” as well as learning to make his own sourdough bread. As someone who grew up on a farm, he felt at home eating locally produced yogurt, buttermilk, and other dairy items.

As in the Dakotafire Local Hardcore challenge, most people participating also allowed themselves “trade items.”

“The goal of what we were doing wasn’t to exclusively eat what was in our backyards—people have always traded things that weren’t available to them, like the old spice trade. We wanted to mimic that and carry it on … and we didn’t want to be an exercise in self-flagellation, either,” Dahlberg laughs.

The results of this challenge were rewarding to Dahlberg and the others involved. Years later, he still reaps the benefits of the skills he learned during the challenge.

“While I’m not hardcore about it now anymore, since I do buy things I like from faraway places, I continue to buy locally,” he says.

An important skill that he learned from the challenge was fermentation.

“The eating season is much longer than the growing season in our part of the world, and learning that skill is something that I maintain and continue now years later,” he says.

Canning and fermenting were wise strategies for continuing the challenge into winter months. There is also appeal in cracking open a can of summer vegetables to serve in the cold Midwestern winter. “The freshness of the food is a plus,” he adds. “It’s a thousand miles fresher than things in the grocery store.”

The other benefits that Dahlberg pinpoints impact both the community and the individual.

“I like having a viable small community,” he says. “I like living outside of a small town, and it’s important to me to not have to go an hour or more to get things that I need. If I can have that convenience, I have to support the community first of all. It’s really a matter of keeping rural Minnesota viable.”

He also points to the health of a local population as being improved by local food.

“One of the reasons why there’s a variety of different allergies that are getting to be different chronic problems is because people aren’t getting inoculated by various microbes from our region,” he explains. Eating local foods consistently would help prevent health problems later on.

“I trust people that I have a relationship with to take my needs into consideration with this food,” Dahlberg says.

While large corporations might offer convenience, their priorities differ from that of a community member providing food.

“Having the personal touch is a benefit for me. At the end of the day, anything with a small-scale individual or an independent proprietor has to live and die on their reputation. They have a very strong interest in treating people fairly,” Dahlberg says.

Local foods may have other long-lasting impacts as well. Dahlberg sees locally produced food as having a potent future.

“While there are plenty of moving parts when it comes to predicting what’s going to happen,” he says, “Energy costs will continue to go up, and that will probably change the economics of food in the whole world.”

As of now, the cost of transporting foods from other continents is small enough that it is still profitable. However, as the price of the energy required for transport goes up, local food may become more competitive financially.

“If everyone takes the steps to make local food a major part of their diet now, they won’t have to be scrambling when they can’t get winter fruits and vegetables for a maintainable price,” Dahlberg recommends.

This challenge may be an experience that leads to an entire lifestyle change, but starting out small, like the Dakota Local Food Challenge, is a wise idea.

Dahlberg took one specific lesson from his experience as advice.

“Start slow,” he says. “Do as much research as possible beforehand. If you have the luxury to make the transition over a period of time, do it. Change can be upsetting for some people, and food is near and dear to a lot of us, so totally changing quickly might be stressful.”

A challenge like Dakotafire’s is a great way to dip your toes into a larger pool.

“Start out with changing the source of just one type of item on a regular basis, like eggs first, next meat,” Dahlberg suggests.