By Heidi Marttila-Losure and Wendy Royston

As we look to the future for our rural communities, one thing is certain: What lies ahead is not going to be the same as what came before. Change is inevitable.

Will that change be good, or will it be bad? It could go either way. But at least some of that direction is within our control, suggested Joe Bartmann, facilitator for the first Prairie Idea Exchange event, held Sept. 10 in Aberdeen, S.D.

“By changing the way we think about change, we change the way we act, which changes the trends and ultimately the events that will happen,” said Bartmann, process host and community coach of Rural Weaver, LLC. 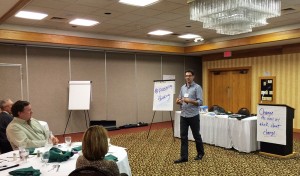 Bartmann invited the economic development professionals in the room to ask themselves and one another tough questions to challenge mental models that aren’t productive.

“Sometimes what happens when we feel like we’re stuck, when we feel like … we’re spinning our wheels no matter what kind of resources and effort and time we put into it,” he said, “what’s actually keeping us stuck is what I would call ‘limiting beliefs’—beliefs that limit our possibilities.”

Bartmann, who lives in a small town and works with rural communities all over the state, gave two examples of limiting beliefs that are common in rural places: Success is for someone else, somewhere else. And: Success is getting our community to look like it did 50 years ago.

“Without realizing it, people in our communities put on our blinders for possibility because we can only imagine our community the way it used to be,” Bartmann said.

The goal is to recognize limiting beliefs, put them aside and practice the opposite: possibility thinking.

What if we assume that we already have everything required to make our communities the kind of communities we want them to be? “It’s not somewhere else. There’s not somebody with a magic wand who is going to show up and fix things,” Bartmann said. “We have it. It’s possible.”

At the PIE event, several participants were invited to share a time when a change in thinking—setting aside a prevailing idea of what was possible, and opening hearts and minds to a different
possibility—resulted in a success in the community. Those listening to the stories were then asked to describe the factors that they heard in the stories that changed mindsets and led to those successes.

Here are some of the stories they shared. (Doland’s story was also told at the event; read about its successes in this issue.)