Johnson family brings in the next generation to their organic farm 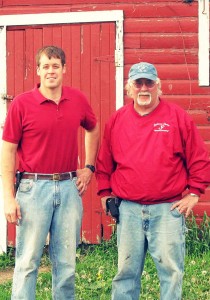 Brothers Charlie and Allen Johnson inherited a legacy of organic farming: Their father had jumped into organic agriculture with both feet in 1976, long before any sort of organic industry existed.

“My dad was always of the strong belief that if he couldn’t put it on the tip of his tongue, it wasn’t going to go on his land either,” Charlie said in the book The New American Farmer, published by Sustainable Agriculture and Research Education in 2005. “That was his litmus test, literally, as to what was going to be used on the farm. He really had a strong belief that conventional fertilizers and chemicals were harming the soil and the life that was in the soil.”

Farming organically, as the Johnsons do on their 2,800-acre operation south of Madison, S.D., provides a variety of benefits to the land, the food system, and the broader community, Charlie said—but it also has its challenges.

“You really get no time off farming organically,” Charlie said in a recent interview. “Our crops also become time-consuming. For example, right now we’re growing oats, and we’ll be harvesting those in late July when most farmers aren’t worried about harvesting. Weed control is the biggest challenge. It takes much longer without chemicals.” 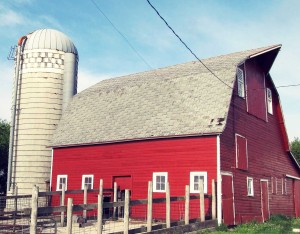 Takes longer—and requires more labor. That’s why, when they were approached with an opportunity to farm some more land nearby recently, they asked their younger cousin, Aaron, who was working selling seed and agricultural products, if he was interested in coming back to the family farm.

This excerpt from an article published on the SARE website explains what happened next:

“I took a few months to consider it,” Aaron said, “and I came to the conclusion that it was a no-brainer. It’s a rare opportunity to be asked to come back to the family farm, and farming is something I have always felt called to do. After thinking about it, all signs pointed to yes.”

As he made the transition back to the farm Aaron looked for ways to prepare to join the farm operation. That’s when he found out about Farm Beginnings (a program administered by Dakota Rural Action). Aaron and his new wife, Kirstin, enrolled in the Farm Beginnings course hoping to gain skills in financial management, record keeping, and general farm management. They attended the twice-a-month classes, taking in sessions like Whole Farm Planning, Financial Planning, Marketing, and Business Planning and Connecting with Resources. They were able to connect with other beginning farmers who were just starting out as well.

Charlie even became involved the class, serving as a presenter for the Business Planning session.

Aaron says that having farmers lead the classes was invaluable. “Being able to hear firsthand from the experiences of established farmers was incredible,” Aaron said. “My favorite part was being able to learn about how they first started out, their thought process, their failures, and them being able to see the light at the end of the tunnel. They struggled through and forged ahead.”

Aaron believes taking the Farm Beginnings class is well worth the money. “It’s an eye-opening experience that really prepares you for farm management,” he said. “It’s also a really cheap lesson if you learn that farming isn’t for you.”

Aaron and Kirstin graduated from the class in August 2011. Aaron is now being brought into the operation as a farm partner with a 10-20 percent share. This makes him more likely to receive a favorable loan if he needs one, as having a percentage of ownership in the farm makes him less of a financial risk.

Aaron’s role in the operation is clear to Charlie: “He provides the major labor source,” Charlie said with a laugh. His background in ag products also comes in useful as they explore new technology.

Other family members are also involved in the operation, including another brother who serves as a mechanic.

“When you think about it, we support three families off of this farm, when it’s so much smaller than non-organic farms that don’t feed that many,” Aaron said. “I have a good life here, we all do, and this is a great thing to do.”

He’s happy to be stepping into the Johnson Farms’ legacy.

“I would like to see (Johnson Farms) hit 100 years in organic production,” Aaron said in the Farm Beginnings article. “I’d like to raise the next generation of family farmers at Johnson Farms.”