In many small Dakota towns, when a business is ready to open or expand, it faces a dilemma: Go to Main Street, or the highway?

“A major highway brings people to town, and Main Street gives them a reason to stay,” Brink said. “You need both.”

As a result, certain types of businesses tend to fare well in each part of town—in the heart of town, service-type businesses such as salons and banks, coffee shops, boutiques and other niche shops; on the highway, businesses better-suited to easy access, such as auto dealers, farm implements, gas stations and mechanics.

“Context is really important, and an evaluation of your business’s purpose and value is important, too,” when choosing a location, according to Fridell.
“If your business is a destination business—like a winery … you will have a very hard time succeeding on the highway. … You want to be in a place where people want to get out, look around and potentially lose a little time.”

Such niche businesses, grouped together, have a special place in towns.

“If you have the opportunity to add to a community by placing your business downtown, you and your fellow entrepreneurs can make that place great together,” Fridell said. “The highway is kind of a lonely proposition.”

In addition to the travelling Fridell has done professionally, Fridell has volunteered in several small towns as part of Design:SD, which helps communities plan and create a vision. He said there is often an innate tension between the highways and Main Streets within communities.

“Every small town with a highway grapples with how to efficiently get traffic through their small town, but also use that traffic to best serve their community,” Fridell said.

Part of this, he said, is linked to the purpose of each type of roadway.

“Communities aren’t concerned about how long it takes someone to drive through their town. They want it to take a longer time, so that people” notice the local businesses, he said. Conversely, “the (Department of Transportation) wants to move people through efficiently and quickly, (so traffic isn’t) backed up. … The highway is there for the vehicle, not the person.”

Communities thrive on highway traffic, according to Fridell, but must work to find a reason for outsiders to venture beyond the highway.

“Whatever (they) have going on downtown needs to come out to the highway, so that people can see it,” he said. “You don’t want how wonderful your town is to be the world’s best-kept secret. … You need to send signals through your physical environment that there is a destination over there, and there is a fun, friendly place to be.”

Providing a reason to turn

“Communities need to have a branding discussion, and then guide the things that happen in their communities toward that brand as much as they can,” he said. “A true brand is not what you say, it’s what people say when they leave. … Your brand can be something you don’t necessarily want it to be.”

Examples, he said, include Deadwood’s billing as a “Wild West” town and Pierre’s as “the Capital City.”

“Main Street really needs to reflect the best of the community, because (for) the people who do turn off of the highway, that’s the place where they’ll go,” Fridell said.

In September, when Design:SD visited Webster, S.D., which markets itself “a place for all seasons” in homage to its year-round hunting and fishing opportunities, a visual invitation into town was one of many suggestions.

“As big as they might be, (our signs) might not be as noticeable as we want them to be,” said Melissa Waldner, Webster Area Development Corp. executive director, adding that a recommended pond and fountain at the intersection of highways 12 and 25 would “really make it noticeable that ‘we’ve arrived somewhere. We’re here in Webster.’”

Highway 25 runs north and south through the town in northeastern South Dakota and doubles as its Main Street, while Highway 12 brushes the northern edge and does not necessarily lead travelers to explore the town.

“The DOT estimates 2,500 cars drive through on Highway 12 every day. That’s a lot of people driving through, but they … really can’t see that there is more” to the town because of a hill, Waldner said.

Gateways, a team of people set up after Design:SD visited, is working on prioritizing the ideas to get people off of Highway 12, and to pause when traveling Highway 25/Main Street.

Another team, the Main Street Vision Team, is working on ideas to make the business district, which Waldner describes as “doing well, compared to a lot of small towns,” even stronger. Suggestions from Design:SD include offering incentives for Main Street businesses to spruce up their exteriors.

The Gateways group will explore working with the DOT to install signs for the town’s business district and to direct traffic off the beaten path to Webster’s $2.3 million pool with a “waterpark-like feel.”

“Unless you’ve been there, you probably don’t know where it is,” Waldner said.

Even before Design:SD, Webster residents were working on gateway-type projects. A stoplight was installed at the intersection of the town’s two highways last year.

“The community had really wanted it for a long time, because there had been a lot of traffic incidents. … Putting that in … really helps, because if you need to stop, you might look around. … (It’s a way to) make people stop and think (about) what else is (happening in) Webster,” Waldner said.

While Waldner said some of the ideas brought to town by Design:SD may seem pretty big for a town of 1,800, big is what’s needed.

“Development is hard. … You just really have to have a big vision, and you have to be ready to work for it.” 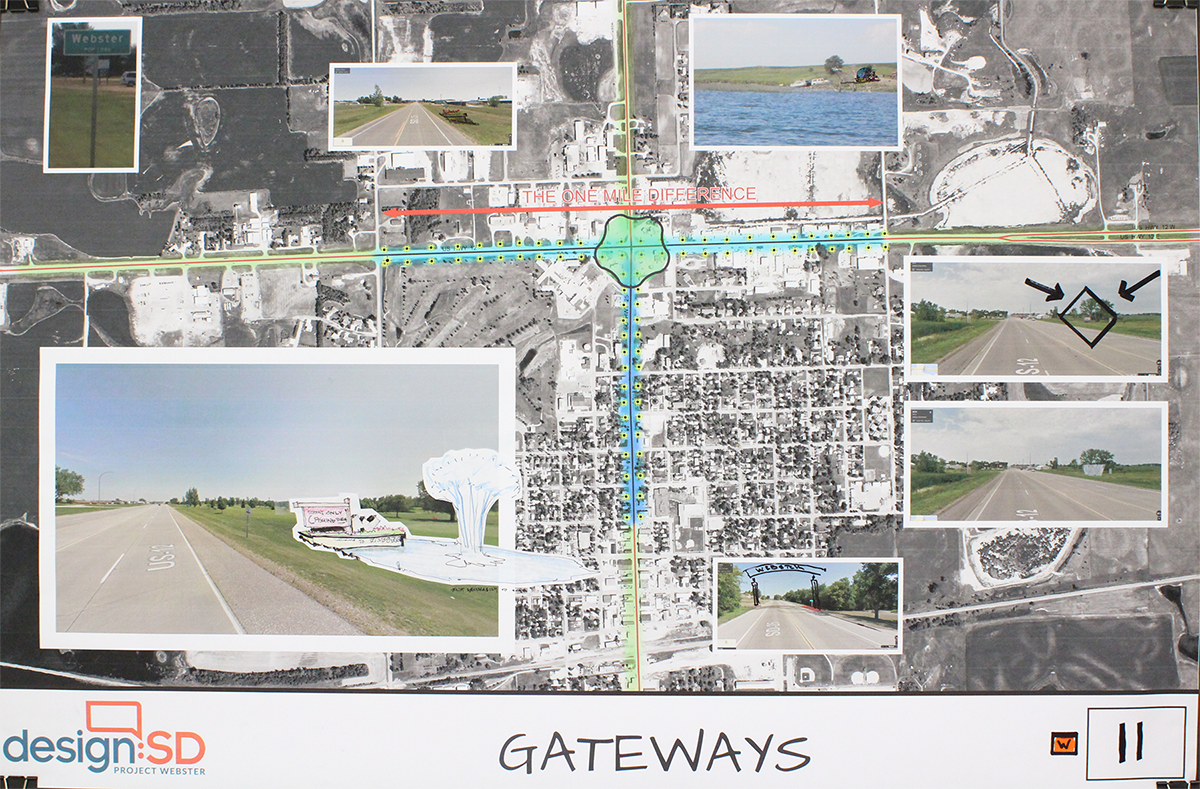 The illustration above was created as part of Design:SD’s presentation of ideas and vision to the Webster community.

As architects participating in a Design South Dakota event in Webster, S.D., learned about the community last September, they had community members take part in an exercise that highlighted the places they frequented in the community (which they marked on the map) and the places where visitors stopped (marked on the map in a different color). That map (not pictured) led to an interesting observation: In Webster, visitors and residents often spent time in different places. Visitors were more likely to stop along U.S. Highway 12, while locals did their business on Main Street (also Highway 25). Some suggestions of the Design:SD team came from that observation. 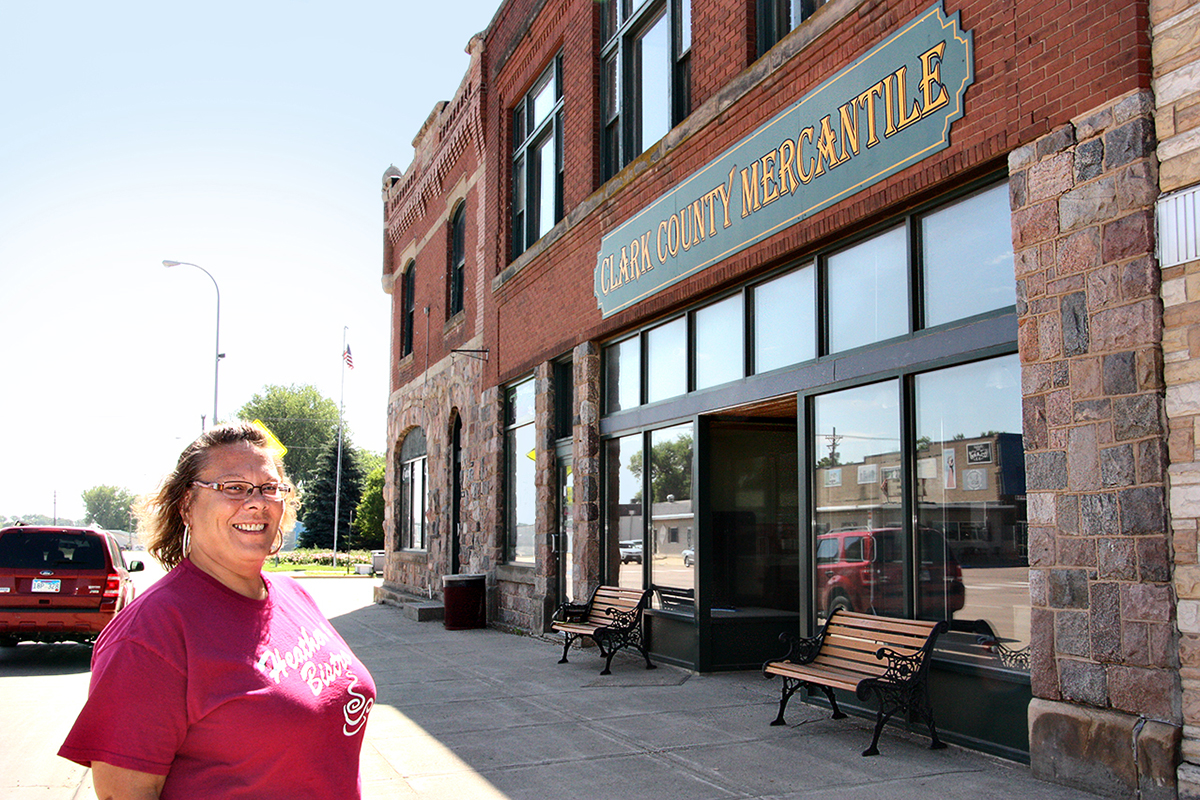 How does location affect business?

Randy Gruenwald, owner of Dakota Butcher, about one block off of U. S. Highway 212 in Clark: “We’re not far off of the main highway, but we do try to put a sign on the highway to point to our direction. … I don’t think it matters so much in a small town as it does in a bigger town. Our customers know where we are. People will find you if they want to patronize your store.”

Heather Johannsen of Heather’s Bistro and More, which moved last summer into a large brick structure along U. S. Highway 212: “This is where the building was located that I wanted. I love old buildings. It was more the building, rather than the location, that influenced my moving here. But it does help being on the highway for those driving through. My new signage has helped immensely. I’m not crazy about the parking though.”

Kris Florey, a hairstylist/cosmetologist at the Hair-N-Stuff salon along the highway: “I think it does help to be on the highway and maybe makes a difference being next to a gas station. We get the coffee drinkers and the truck drivers, people coming through. We get a lot of people stopping in as they go through.”

Linda Seefeldt, co-owner of Clark Flower and Gift Shop on Clark’s ‘Main Street’ (Commercial Street), located one building away from U. S. Highway 212: “I think it depends on the kind of business you are and the size of the town. We would be dead meat if we moved away from Main Street. I think you need to be where the people are if you rely on people casually coming in. People out on their lunch hour, for example, would probably not drive out on the highway to shop.

“If you are a destination store, specializing in items such as guns or sporting goods, customers will come to where you are, I think.

“We are lucky in Clark that our main-street businesses are so close to the highway. A lot of customers see our window as they are driving by and will stop in.”