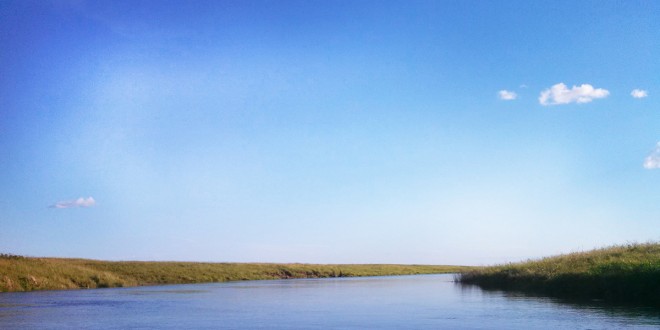 Postcard: A new view of a prairie river 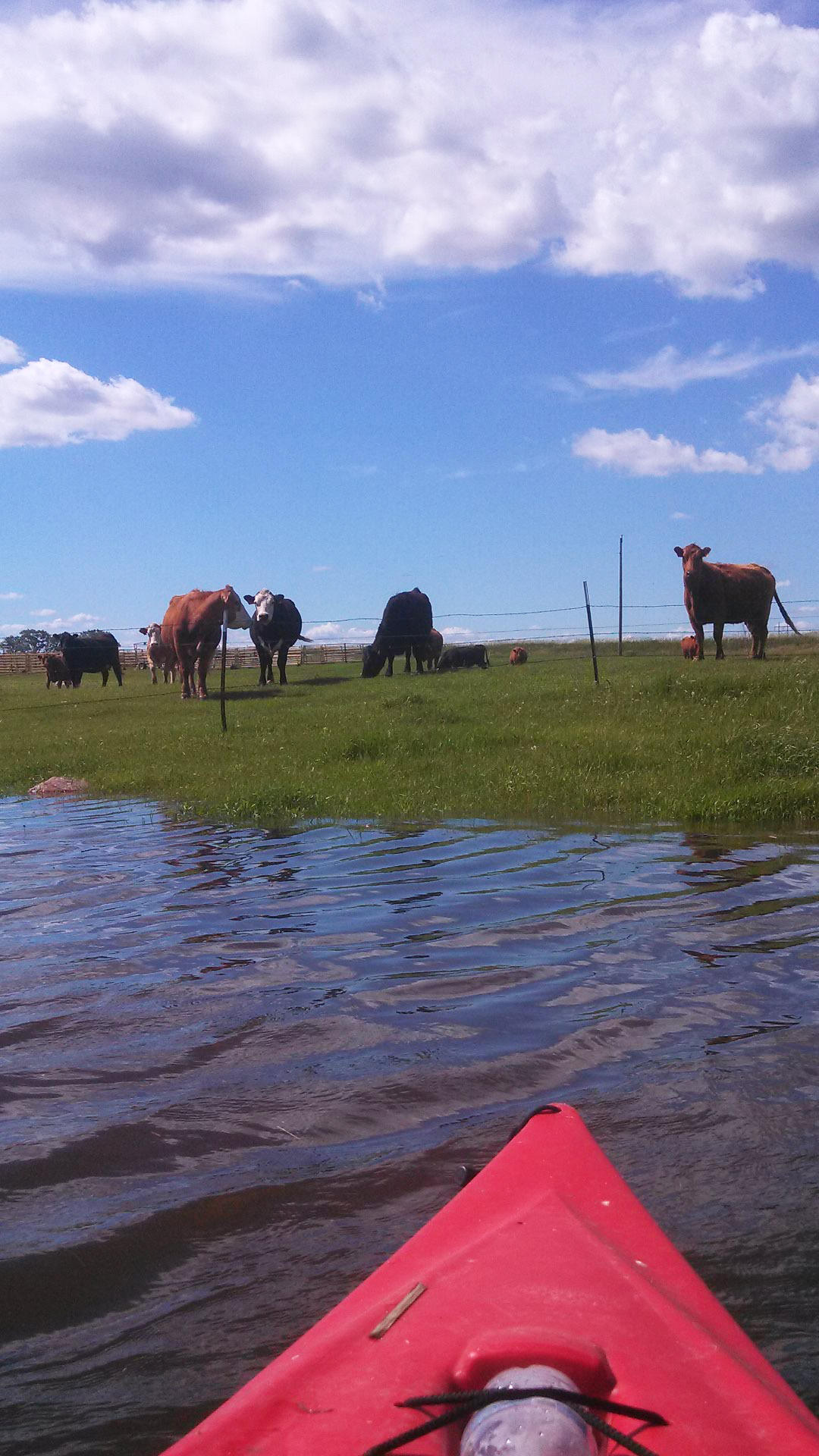 You get to live here.

Growing up in northeastern South Dakota I thought I was one of the unluckiest kids in the world. For me there was a wanting feeling of emptiness about the treeless and windswept landscape. The trees that were present were obediently lined in a shelter belt, planted like a few rows of corn. Their attempt to protect from the God-sized wind was almost comical, which seemed to chuckle at us—the same chuckle I assumed lucky people had when they happened upon our part of the world.

For visitors, who I was sure clearly saw the lack, I had a need to point out what was missing, unappealing, just so they knew I was well aware. Not surprising, after graduation I left South Dakota. My goal wasn’t to get away, though. My goal was to see and take in as much of the world as possible. In one sense I’ve been fairly successful at that thus far—and it’s interesting how different the same world looks now.

Like wind erosion, my change was subtle. I’d been back to South Dakota many times over the years, breezing in and out for pheasant hunting, reunions, or Frederick’s Finn Fest. What I had never seen started being revealed. For me, getting perspective on the world didn’t mean the world changed; it meant that I changed.

My issue with trees had dwindled. Some of the best places I’d traveled had very few trees, and even that wind as big as God. Patagonia in Argentina, the Alti-plano in Bolivia, an African savannah, the Dead Sea in Israel, the rolling green miles of Mongolia. It’s sort of funny, but each of those places touted their sunsets to be the most beautiful in all the world.  Each time I heard that I thought, “That’s not true, we have the exact sunsets in South Dakota!” It was never missed by me—I hadn’t wanted to be from South Dakota.

Let me give an example of one treasure at your backdoor: the Maple River. A good part of my growing up included the Maple. Duck hunting, fishing off the dam in Frederick, camping in a little plot of trees we called the “North Garden.”  But mostly I knew the Maple because it was so plain, like it was unfinished. Or dying. Until I saw it again for the first time. And I wanted to be in it. 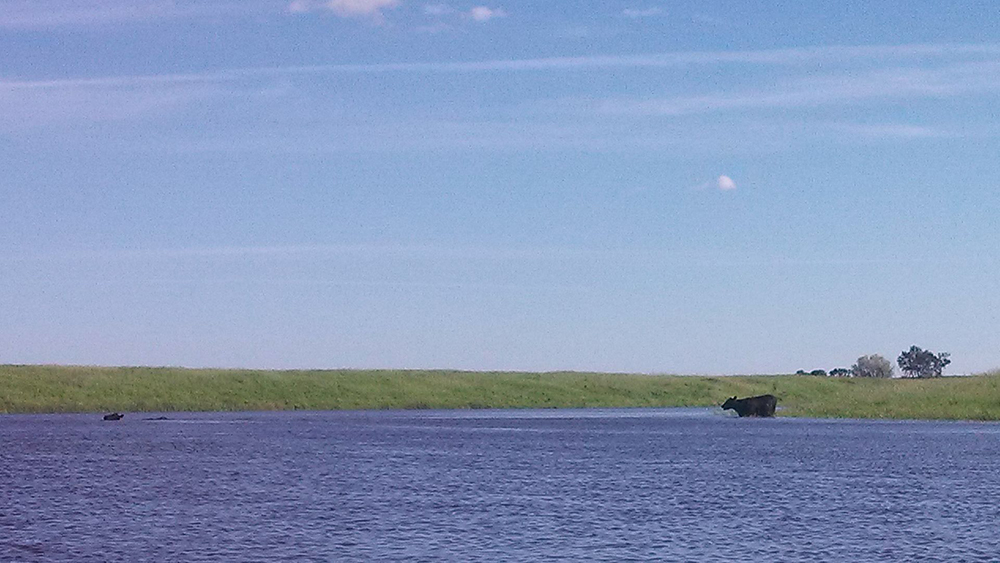 Cows cross the Maple River in Brown County, S.D. At left and right: Scenes of the Maple from a kayak.

There may be a big difference between kayaking down the Maple versus the Zambezi River. For starters, one sounds a lot more exotic, if for no other reason than it’s Africa foreign. But I wanted to float amidst the plain fields and blue Maple as much as I’d wanted the Zambezi. And perspective is an odd concept. For instance, the summer after college I led canoe trips in the Quetico Provincial Park in Ontario. The kids were from boys homes in urban areas where the closest thing to a field was a parking lot. I’d never seen a moose up close. The boys had never seen a muskrat or a muskie. There was no difference between our excited faces.

Nowhere on the Maple are you likely to encounter an animal that would naturally include you on its menu. I have to concede that danger may make some adventures more alluring. But my eyes bulged at the immensity of wildlife on the Maple. I’d just been so used to it, it was like it was never there.

And it’s not like I didn’t encounter some danger.

When I came across a cow’s head bobbing crossing the Maple, I noticed one has just finished the swim and had turned to watch the second, her calf. A third cow was still on the other side, mooing back and forth with the first. Curious, I gently back-paddled. The water was fairly swift, and I have to admit I was nervous the calf might not make it.  Would I actually try to help if one was drowning? Could I get caught up and drown myself?  Would anyone ever know what became of the guy who kayaked the Maple? And if I saved a cow, would a farmer thank me with a grateful smile, or would he just walk away shaking his head, thinking, “What an idiot”?

Thankfully, they all made it to the other side, and I continued on my plain way. But there was long moment genuinely smiling and thinking “This is pretty damn cool.” I meant it.

And I thought, “How many people get to see this?”

Then I had another thought: “I must be one of the luckiest people in the world.” ⎨

Jeff Glover was born and raised in Frederick and Aberdeen, where he graduated from Roncalli High School. He is now a mental health therapist in Minneapolis.

communities people postcard 2015-06-01
Jeff Glover
Share !
Previous: Where is a great Main Street, and what makes it awesome?
Next: Postcard: Growing up in the hotel on the corner of Main
Scroll To Top