Groton is Growing, and Support of Youth is One Factor 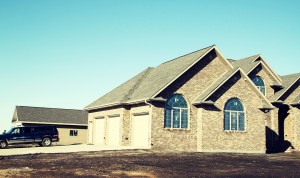 One of the new houses going up in the Olson Development in Groton. Photo by Char Telkamp

Not all communities in rural America are losing population, and Groton is one of those exceptions.

The population of the city of Groton grew 7.5 percent in the last decade, according to Census 2010 results, to 1,458 people. This is much better than Brown County overall, which grew by 3 percent during the same period. Groton’s growth from 2000-2010 was actually down from the growth rate from 1990-2000, when the town grew by 13.2 percent.

Construction of new houses is ongoing in Groton, with a few more going up each year. The town added infrastructure to support three new housing developments, and a housing commission built and then sold 16 apartment units.

“Many Americans prefer to live in smaller places that are near an urban area, but not in them,” according to the Carsey Institute report “Demographic Trends in Rural and Small Town America.” Although Aberdeen is micropolitan and not urban, the proximity to Aberdeen is likely a big reason for Groton’s growth—it’s close enough to Aberdeen to work there, but not be a part of it.

Schools closing on two sides of the Groton School District (in Bristol and Conde) also played a role, adding to school enrollment numbers.

That’s not the whole story, however: Groton has worked in many ways to make the town a good place to live, which has helped to bring back some of the young people who left to go to college.

Groton is strong supporter of youth activities—everything from 4-H, scouting and sports to martial arts and music lessons. And the town supports these activities with infrastructure as well—a golf course, a three-field baseball complex, a soccer field and a swimming pool have been constructed and/or improved the last 15 years.

According to Anita Lowary, Groton’s city finance officer, other factors that have fueled Groton’s growth are more jobs (at the Poet ethanol plant, James Valley Telecommunications, the school, and in construction), a positive attitude toward diversity, and a reasonable cost of living.

“Business growth is encouraged, but the main actions have been expansions of existing businesses,” Lowary wrote in an e-mail. “An active downtown has moved to be more highway locations with traffic patterns declining on Main Street. Several service businesses and recreation opportunities have developed to further the ‘bedroom community’ image Groton has developed.”

2012-04-30
Webmaster
Share !
Previous: Family Motivates Some Britton-Hecla Seniors to Plan Return
Next: No Time to Lose For Faulk County
Scroll To Top