Empty spaces on Main are an opportunity 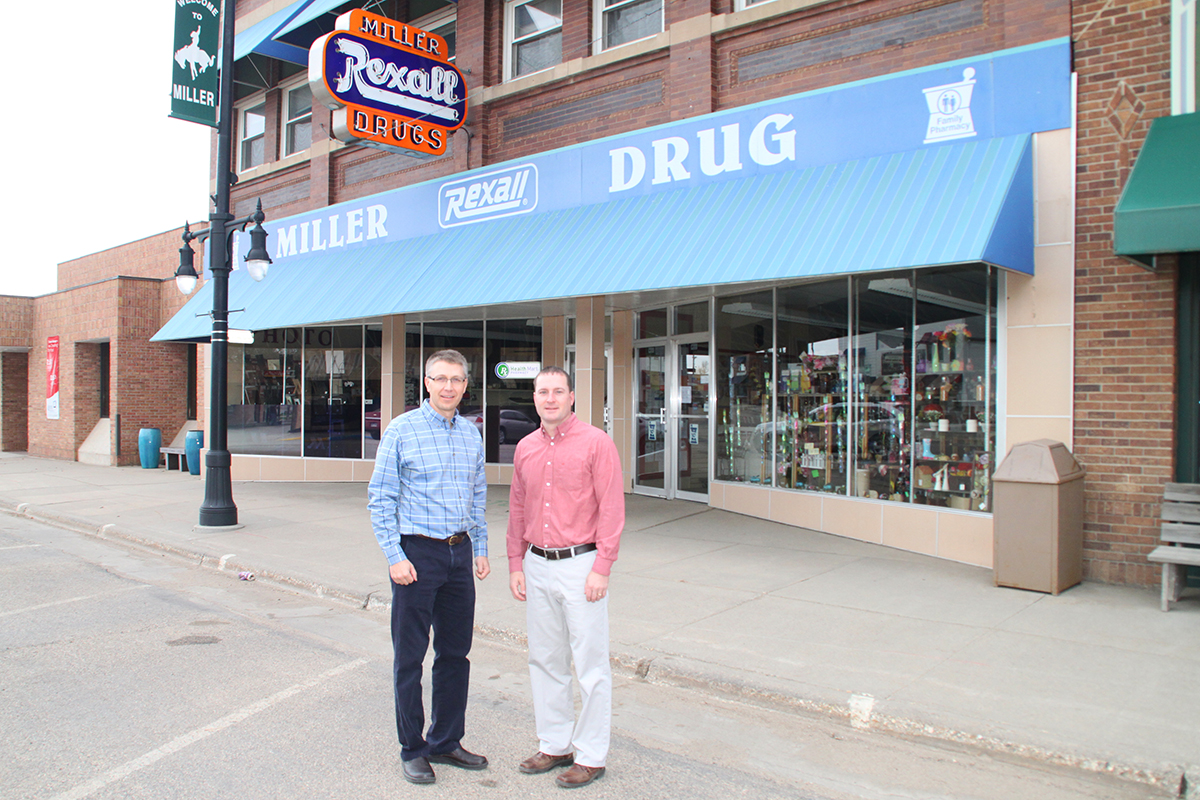 Pharmacists Trent Merkwan, left, and Travis Anderberg stand outside the Rexall Drug they jointly own in Miller, S.D. The men began renovating second-story apartments after a 2013 housing study revealed the community had no available rentals. Photo by Deidra Schlechter

If Main Street is the face of a community and the first impression it gives visitors, an active and lively downtown is key to telling an upbeat story.

“A black hole on your Main Street will suck the energy right out of your town,” said Matt Fridell, a landscape architect with Tallgrass Landscape Architecture in Custer, S.D. “It’s really important to address blank spaces and derelict places in downtown.”

Adding life to downtown can be as simple as adding planter baskets and fresh paint, or it can mean replacing broken windows and products of dilapidation.

“Any building that you have that looks empty … really impacts the positive perception of your Main Street, so making sure … everything seems like it’s really being taken care of (is important),” Fridell said. “Those are really important indicators that your community is healthy and vibrant.” 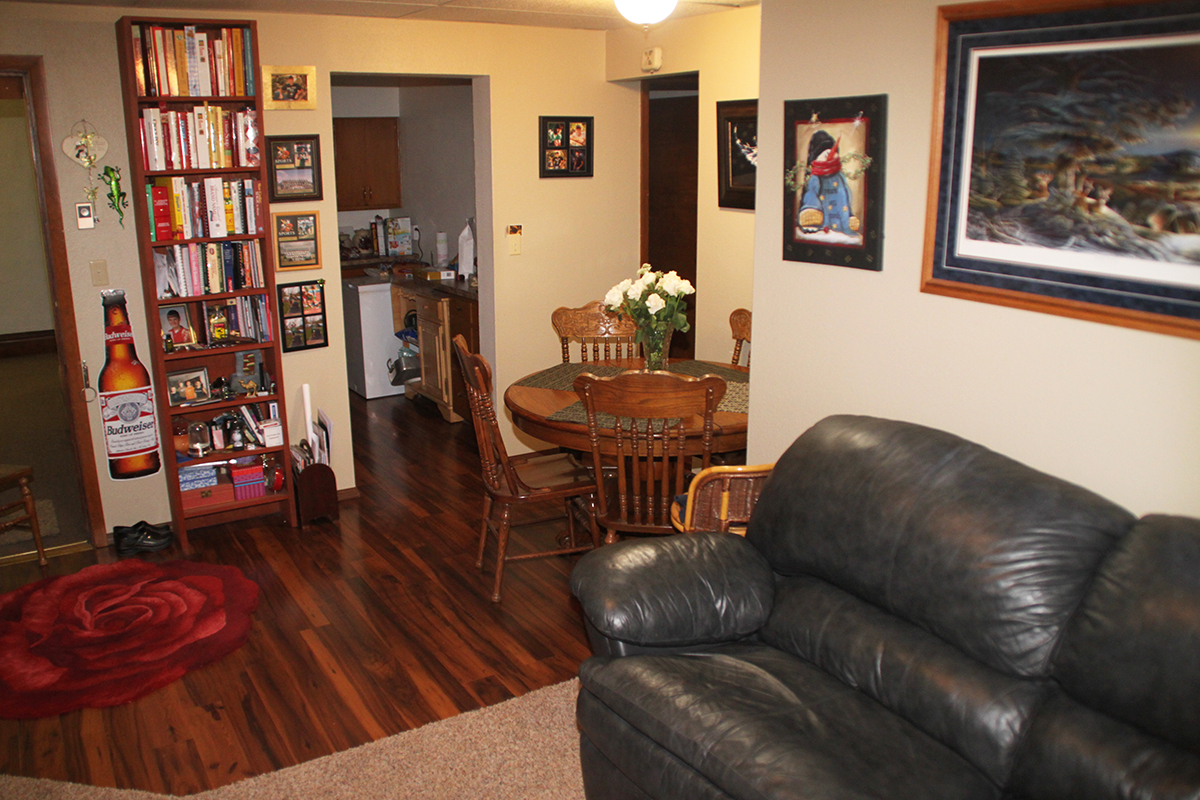 The apartments above Rexall Drug in Miller have helped to alleviate Miller’s housing crunch. Photo by Deidra Schlechter

Rehabbing for residences in Miller

In Miller, S.D., filling in empty spaces on Main Street also filled in the need for additional housing.

“(When) we did the housing study, there were zero apartments available,” said Amy Howard, executive director of On-Hand Development. “We had employers that were trying to hire people that couldn’t come to Miller because they couldn’t find a place to live. That’s a real problem. … We’re fairly isolated. We’re the biggest town for 45 miles in a couple of directions, and 70 miles in another,” so commuting from another community is difficult.

Miller pharmacist Travis Anderberg and his business partner, Trent Merkwan, saw that they could be part of the solution to Miller’s housing crunch. Seven apartments in the second story of their Rexall Drug building had sat empty since a pipe leak flooded the pharmacy about a decade prior.

“Based on our location and helping out the life of our building, (we realized) it might be a good thing to have good renters upstairs. There’s always the risk that we have to face of flooding, fire and everything else … but it’s also a business. We have income from it,” Anderberg said. “In about three years, we’ll start seeing a return on our investment.”

Although Anderberg said business owners must be selective when choosing renters, the presence of a good renter is insurance for the business.

“When we have people parked out front and out back and people living upstairs, I think it kind of helps deter (mischief). They watch over the building. I know everybody who lives up there,” he said. ”That helps.”

“It’s always nice to have … a main street that has cars on it. There is a benefit there, to having activity on Main Street, because the more activity you have on Main Street, the more attention you’re going to draw, so it’s good for the businesses.”

Initially, four single-bedroom apartments were remodeled. They currently are combining an apartment and a half into two-bedroom dwelling, and one of the singles will be combined with the other half-apartment for a second two-bedroom. The remaining original apartment will continue to be a storage space. Anderberg said the venture has benefited the community in multiple ways.

“We’ve definitely made the right choice,” he said. “We’ve filled a housing need in the community that certainly helped a lot of people, (and) we brought in a new professional to our hospital … before they (closed) on their house.”

Howard said housing still is limited in town, but the additional apartments have helped. One family even lived in a camper in nearby Highmore, S.D., for a while, because the homes available when they first moved to town were not suitable for a child with asthma. After a while, the wife and children moved back to Mitchell, S.D. (95 miles away), until a home came available recently.

“There were no expansion lots in Miller, but there were a lot of junk properties that no one could move into,” Howard said. “We have had quite a number of properties that needed to come down that have … and that’s allowed the neighbors to add value to their homes by adding a garage on, or we’ve had (several) new houses go up on lots where a property was removed.”

In mid-April, a handful of homes were available for rent or sale in Miller.

“The ones that were for rent won’t last long, and … a good solid home doesn’t take long to sell in Miller,” Howard said, adding that homes typically sell for above their actual value, due to the shortage.

Dreaming together in Aberdeen

A new Aberdeen project is working toward filling empty commercial spaces with businesses. The Empty Spaces Project is a collaboration effort between StartHUB, a group focused on promoting entrepreneurship in the Hub City, and the Aberdeen Downtown Association.

StartHUB is creating a website of available properties and providing as many details as possible, much like a realty site, but with a twist: It is inviting people to weigh in on each building post, suggesting possible uses for the building.

“This is essential proof of concept,” StartHUB organizer Liz Hannum said. “If your idea gets hundreds of votes, you have customers asking you to start your business today.”

The group is looking at ways of helping fund great ideas, too, through crowdsource funding, waived rental fees, and “pop-up” or temporary business ventures. (See the story on SmartHUB on p. 28.)

At the same time, the Aberdeen Downtown Association will do its part to help people dream, too, by setting up three-dimensional displays in empty Main Street buildings’ windows.

“When you drive by or walk by, it will look like there’s a business inside,” said Aberdeen Downtown Association Economic Director Heidi Appel. “It will encourage people to stop, look and think. … It would encourage them to dream.”

“The great thing about downtown is … whatever you want to happen is usually accepted,” she said. “(Consumers) don’t want the same as they can buy at a Target or a Walmart or a J.C. Penney. They’re looking for something different, so really, the sky is the limit with options and ideas.”

Appel said that, while six or seven empty buildings in a six-block area may not seem like many voids, it is too many.

“We don’t want our buildings to look empty, and that’s kind of why the window project makes sense. We all like to walk by something and think that there’s life and energy and all of those things that go with a downtown,” she said. “When you start to see empty buildings, people have the exact opposite impression. … Each one of those (empty buildings) displays a loss of life and energy.”