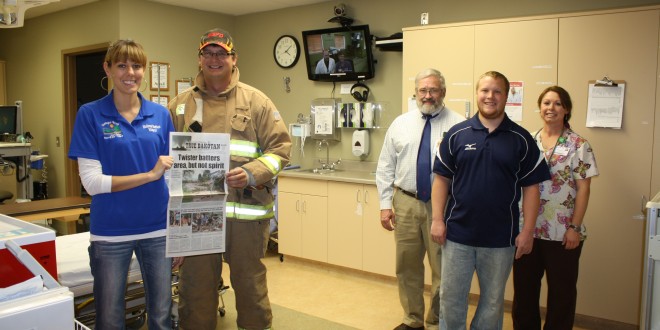 eEmergency service provides local hospital a lifeline of its own

Small hospitals serve a vital role in the Dakotas’ rural communities, but having full-time  specialists  available  for  major  emergencies  has  been  impossible  until recently.

Small hospitals serve a vital role in the Dakotas’ rural communities, but having full-time specialists available for major emergencies has been impossible until recently.

Avera’s “eEmergency” system “is certainly the most useful piece of technology that we’ve had to work with in the last 30 years or so,” said Dr. Tom Dean, who is employed by Horizon Health Care with privileges at Avera Weskota Memorial Hospital in Wessington Springs.

With the eEmergency system, subscribing rural hospitals simply push a button in the emergency room to activate the system, bringing physicians “into” the room from Avera McKennan Hospital in Sioux Falls via two-way video equipment.

“With the really urgent kinds of things, when we need to do a lot of different things at the same time, the folks in Sioux Falls can help us out with that,” said Dean, who has practiced family medicine since 1978. “They do some of the record-keeping while we’re involved with the patient, and then they have a doctor there who would help us to think through the problems and try to come to a conclusion about what the next step should be.”

The doctors are there to advise when needed—which is not often, but when they are needed, their help can be vital. “Ninety-eight percent of the time, you don’t need that, but there are occasions that you get someone who is really serious, and we do every so often, that it’s very helpful to have the extra hands, but more than anything—to have the extra heads there—to help us think things through, and help us sort out what the next steps will be,” Dean said.

The team in Sioux Falls can also arrange for transportation, such as a helicopter, if that’s needed.

Three years ago, one Wessington Springs family learned firsthand how valuable the service can be. On June 30, 2011, Blake Willman, then 19, was mowing the lawn at the local golf course when the tractor mower he was riding rolled on top of him, pinning him for over an hour.

“As time went on, I really thought I was going to die,” Willman said.

“We don’t ever really check up on each other, but we’d made plans to go out for dinner that day, so when he got done, he was supposed to come find me,” Willman said. “He couldn’t find me, so he started looking for me.”

Vavra promptly summoned help, and Willman was taken by ambulance to the local hospital, where the eEmergency system helped local staff work through his case.

“I thought that was really cool, connecting with people who see trauma like that every day,” said Willman, now 22. “It kind of relaxed me a little more. I trust all of the doctors out in Springs, but they don’t see that every day, so they wouldn’t necessarily be prepared all of the time … It was nice to know that that lifeline was there for them to rely on.”

With the help of the eEmergency crew’s advice and support, local doctors were able to perform Willman’s initial assessment, and doctors at Avera McKennan knew the details of the case before he ever left Wessington Springs.

“I really didn’t think it was that bad … (but) I couldn’t feel my legs, because it cut off the circulation,” Willman said. “I tried to sit up, but they wouldn’t let me do that. When I did that, I noticed I had burns all over my body, from the gas leaking on me. That’s when I knew I was in a little bit more trouble than I’d originally thought I was in. I didn’t think it was that bad, really, until I heard one doctor say, ‘The helicopter is on its way.’ I actually asked my mom who the helicopter was for.”

Willman credits the Avera Weskota medical staff with keeping him calm during his initial treatment—something he said may not have happened, had he been taken directly to the larger, regional facility.

“Just being in the hospital, where I knew everybody and they knew me, I think it just eased me and eased my parents up a bit, and I think that plays a lot in helping with the recovery, because you have all of those people pulling for you,” he said.

At the Hennepin County Medical Center burn unit, Willman learned he had sustained second-degree burns over 50 percent of his body, and third-degree burns over 1 percent of his body. He was unable to walk for three days, due to nerve damage and a “locked ankle” from being pinned under the mower for so long. Although doctors in Minnesota initially said he would be hospitalized at least a month, Willman was released within a week.

“They’ve come a long way with burn treatment,” said Willman’s mother, Linda Willman, who is a certified emergency medical technician. “Basically, they fed him all of the protein he could eat. That’s how you heal a burn, other than debriding and … salve.”

Once his burns healed, the fresh Wessington Springs High School graduate received physical therapy at his hometown hospital for about a month before heading off to Morningside College on a wrestling scholarship. Although Willman’s dreams of college wrestling came to an end shortly thereafter, he said he is thankful for the way things turned out.

“After the accident, I was pretty bitter that it had happened to me, but with a little bit of maturity and a little bit of help, I realized that I am a better person from it,” he said. “I just gained a better appreciation of life, I guess.”

He also gained a new appreciation for his hometown hospital and its employees.

“I had excellent care. … Just because we’re a small town doesn’t mean we’re any less qualified than somebody else, especially with the eEmergency that they have,” he said. “They have almost as may resources as any other hospital in the state, and if they don’t (have what you need), they’d be shipping you off to where you need to be.”

“I know we’re just a small-town hospital, but I have faith in what we have here. It was just reassuring that there was that second doctor (or two) to watch,” the Wessington Springs city finance officer said. “They did call the air ambulance right away, but it takes a while to get here. … As an EMT, I’d rather have a doctor’s opinion before I take off for a long drive. … I think that eEmergency service is a great addition to the small-town hospitals, because of the ‘golden hour.’ When they’re waiting for the ambulance or the air ambulance to get here, that’s a chance for the doctors to get to see what’s going on and not wait for the EMTs or the flight crew to tell them what’s going on, (and) they can be ready.”

The community of Wessington Springs again learned the value of Avera Weskota’s access to eEmergency services this year, when an EF-2 tornado hit the roughly 1,000-population community on June 18. Staff at the “eHub” in Sioux Falls activated the system, letting local staff know that they were prepared to help them through the disaster.

“eEmergency made calls to the nurses, the providers, and the lab to come in, and we had a tremendous response. … Even some of our staff who live in Mitchell drove out,” said hospital administrator Gaea Blue. “Our local providers—and even some who were visiting from out of town—came in. The nurses, at the same time, were getting ready to triage patients, so they had the carts and name tags you need all ready to go.”

Hospital officials said they were thankful to not actually need the help, despite the fact that 30 homes—including nine belonging to local medical workers—were either destroyed or had to be demolished.

“We had only one patient who was admitted, and then was treated and released,” Blue said. “I live one block from the nursing home, and the tornado went between my house and the hospital. … Had that directly hit our (adjoining) nursing home, which has a peaked roof, I’m afraid we’d have had a sad outcome.”

While minor repairs to the facility’s roof and windows were necessary, its connection to eEmergency staff was priceless, according to hospital officials.

“Even though our regular Internet and communications were down, they somehow figured out a way to link in,” Dean said.” I honestly don’t know how they did that. They were just available if we had needed it. … It could have been a huge asset, if we would have needed to transfer anybody, or if we needed extra supplies. They just sort of stood by and said, ‘We will be here, and we’ll kind of just keep the connection open, so we know what’s going on. If needs turn up that need to be done, we’re available.’”