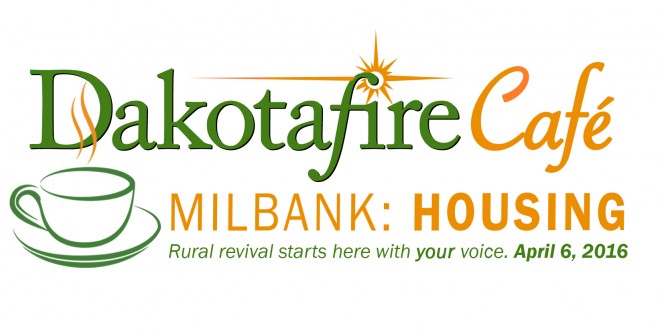 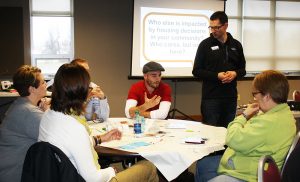 With a goal of growing their town’s population 20 percent by 2020 to meet projections of a growing workforce, leaders in Milbank, S.D., know growth of all sorts will be necessary to make the dream a reality.

It’s “quite a goal, but you have to look at the total impact on the whole community. … We want to make sure that we’re absolutely ready to do that when we do our actual rollout … so we can get people to actually buy into it,” said Milbank Mayor Pat Raffety. “We can advertise jobs, but if there’s nowhere for them to live, they can’t come here.”

Before Milbank can welcome 125 potential new employees, the town of 3,313 needs about 200 new homes. To help them meet that audacious goal, Milbank is taking part in the Home Address Plus program, a partnership among Dakota Resources, Grow SD and NeighborWorks Dakota Home Resources. The program brings community coaches and resource providers into communities to help them create and implement a plan based on housing study findings and the actual needs of current residents.

On April 6, about 30 interested Milbank residents gathered at a Dakotafire Cafe event at the Milbank Visitors Center to open the floor to conversation surrounding housing and to pique interest in the Home Address Plus program.

“We wanted to hold our Dakotafire Cafe in a community that was really geared up to talk about housing, and Milbank presented us with a great opportunity,” said Dakotafire Publisher and Editor Heidi Marttila-Losure.

It was also an opportunity for Milbank to prepare for the work to come.

“We were setting the stage for the housing work that Milbank is planning by getting them talking about the big picture,” she said. “When people see a problem, they tend to want to jump into action, but stepping back to understand it a little better can help make sure that effort is going in the right direction.”

Since the gathering, Milbank City Administrator Jason Kettwig said excitement about the upcoming process has been obvious.

“Probably half or two-thirds of every day since then has been filled with some sort of housing question or somebody with an idea of what we can do,” he said. The Café “is a good thing for any community to do, and a good way to draw suggestions out of your residents.”

Dave Hicks, a contractor and landlord who was born and raised in Milbank, said he’s hopeful that the Café and upcoming conversations will help point him and others interested in—literally—building a future for Milbank toward a focus their efforts.

“I think we do have an issue in Milbank, as far as affordable housing for the middle income people. It’s not bad where it’s at for me,” because “move in-ready” homes on the market aren’t readily available, so both the construction business and the rental business are booming. “They can’t find something they want that’s in the right range, so rather than settle, they end up building. … And those who don’t tend to rent. … But that’s not necessarily good for young people who want to come to town and not have to go through the hassle.”

Hicks, who expressed interest in the upcoming process in Milbank, said the Café was “pretty informative.”

“It wasn’t just a boring, melancholy meeting. It kept people engaged, and felt like maybe something was getting accomplished, rather than just sitting, being lectured,” he said. “I was interested in seeing what they say Milbank is lacking, as far as housing, or what they suggest, as far as how to progress, to make it more affordable and accessible to people.”

Hicks said he plans to test whatever theories come out of Home Address Plus by building a spec house that meets the determined demand.

Why does housing matter for your community’s future?

“As a community, we are business-ready, but we’re not housing-ready at this point,” Kettwig said, adding that availability of adequate housing “removes one of the stresses of relocating to a new community.”

Another participant added that increased housing builds the community’s tax base, allowing for other development.

“It’s the lifeline to our community, vital for growth, and we need to work on it as a community in order to rebuild,” another person said.

What would people and organizations in your community need to be doing differently to help make housing opportunities wildly successful? 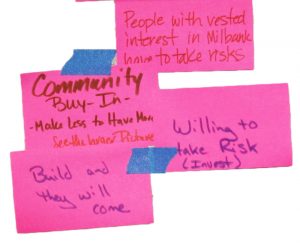 Kettwig said community buy-in is key to inspiring residents to “make less today to have more tomorrow,” and others added that bankers and members of the city council should play a large role in developing a housing committee.

Who else is impacted by housing decisions in your community? Who cares, but isn’t here?

Milbank’s 18- to 25-year-old demographic is nearly nonexistent, in large part due to graduates pursuing higher education, but Kettwig said “There are still some people who could be here, working at some of these jobs.”

A young, professional returner to the community pointed out that recruiting more people like himself would be difficult, too, if some changes aren’t made. 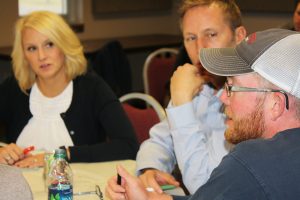 Dave Hicks, foreground, speaks with Amber and Jan Scriver during the Dakotafire Café in Milbank on April 5.
Photo by Wendy Royston

“When I graduated college, I wasn’t looking to buy a house right away, but if you want me to stay, I need a place to start here,” he said. “If you’re thinking about the long-term plan for the community, you need to invest in having affordable places for young people to come back and live, so that they can come back and invest in the community themselves down the road.”

“Milbank has places to rent … but you need to offer places for people to live, to come and work for you. If you want the community to grow, we need affordable living for people to get their foot in the door,” he added.

And the goal to increase Milbank’s population by more than 600 people over a three-year span presents concerns outside housing, too.

“If there are 125 jobs open, are we ready for 125 new people to live here?” one participant asked. “Is our police force ready, is our sewer system ready, our hospital … our school ready for 100 new families?”

Raffety said the community is trying to be both optimistic and realistic in its planning.

“Twenty percent is quite a bit, but even if we can get 10 or 15 percent population growth, that will be a good thing,” he said after the Dakotafire Cafe. “I hope this is a big change in a population trend that every year we lose a few families. We are hoping that, if we build it, they will come.”

communities Dakotafire Cafe housing Milbank organizations 2016-05-21
Wendy Royston
Share !
Previous: Voices: What housing challenges does your community face? What housing successes has your community had?
Next: Pass on the word, teachers: There are jobs here
Scroll To Top