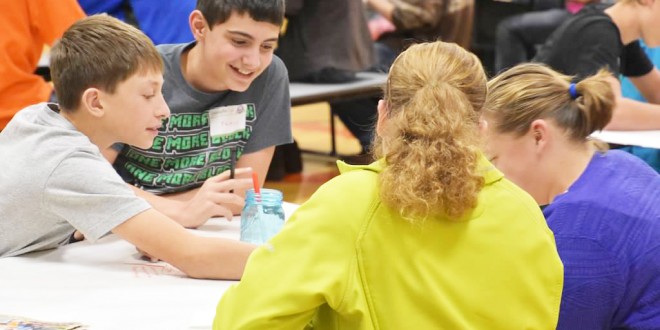 Youth discuss a response at the Dakotafire Café event in Doland Nov. 17. Photo by Jennie Patrick

Dakotafire Café: Building relationships between ages set as a goal

All Doland seventh- through 12th-graders attended the event. Photo by Jennie Patrick

Residents of Doland across the age spectrum say they are interested in each other’s lives, but youth and adults don’t always connect with one another as much as they would like.

Dakotafire Media and Doland-based Beadle and Spink Enterprise Community teamed up Nov. 17 for two conversations—the first, getting the youth perspective on local youth engagement efforts, and the second, welcoming the public to build on that perspective.

“Connectivity is about building relationships and being intentional,” said Margot Gillette, executive director of BASEC. “Most of the time, we are watching them perform, which is important, but there is no interaction” outside school-based activities. “We need the school and community to be better connected.”

Often, adult participants said, adults think they are “connected” to youth by showing up for youth events and supporting fundraisers for youth activities, or by directing students in how to help with adult-created community projects, such as the annual community service project dubbed Doland Pride.

Youth can lose interest in working with well-intentioned adults at times.

“They never really carry forward the ideas from children,” said Dirby Bawek, who attended both Café sessions. But sometimes that’s OK, because the ideas still need work, he added: “When the children have made the decisions, most of them didn’t give much thought to them.”

Both age groups would probably benefit from more conversations with others of different ages. The challenge is figuring out when and where that can happen.

“We need mechanisms to help adults really engage with youth, like connections between local business professionals and youth through the school,” Jody Bawek said.

Retired Doland teacher and Family, Career and Community Leaders of America adviser Darla Knox pointed out that the FCCLA adopt-a-grandparent program is one way the school is paving the way for such interaction.

“Some youth don’t know how to interact with adults, so this is a good opportunity to connect,” she said.

Youth feedback from the Café indicated young people want to be involved, but become discouraged by adult assumptions that they are lazy, unengaged and unable to perform tasks as well as adults. Additionally, they felt that adults assume they know how to handle the issues youth face, because they once were the teens’ age, but they pointed out that “times and connections have changed.” 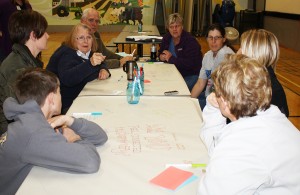 Alma Richard references a point made earlier by Darla Knox during the evening session of the Dakotafire Café in Doland.
Photo by Wendy Royston

Alma Richard, who grew up in Doland and returned later in life, said she was disappointed to hear that local youth feel as if their efforts are so unappreciated.

“Maybe the things we ask them to be involved in for the community are not on their priority list,” she concluded. “Youth are living in today’s world and looking to the future. Adults sometimes look to the past, which doesn’t connect with the youth. We assume that youth want the same things we do.”

But many youth said they would engage more with adults if given the opportunity. The criticism that “there is no place for youth and adults to hang out together” rang loud and clear among Doland youth, who suggested opening in ice cream or coffee shop would be a start to overcoming that problem.

Overall, the youth felt like they were good at producing and promoting new and fresh ideas for the community, and suggested that the opportunity for increased collaboration would give everyone the extra push to get things done.

The adults in attendance agreed that they often assume that youth are not interested in youth engagement, with one exception: role modeling.

“It’s a back-and-forth” relationship, said Jamie Johnson, a local farmer and member of the South Dakota Ag and Rural Leadership Class of 2016. “If youth see adults excited about being active in the community and their local business, then they reciprocate that and want to be involved and learn about the community.”

We had so much fun with the youth engagement topic, we’re going to do it again in Miller, S.D.!

Come for a fun afternoon & evening about connecting youth and community, as covered in the Nov/Dec 2015 issue of Dakotafire.