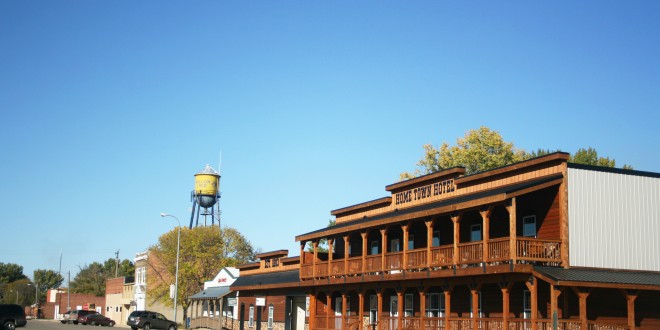 Story and photos by Heidi Marttila-Losure

The fire that decimated several buildings on Willow Lake’s main street in July 2011 marked a turning point in the community. 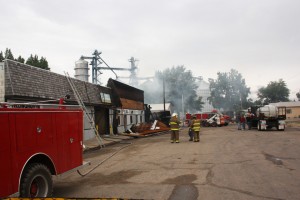 It was not so much a change from standing buildings on the east side of Garfield Street to rubble and ashes, although that was the most visible change. The fire also moved Willow Lake from a community that was in some ways letting change happen to it, to a community that was determined to set the course of its future.

“I would never say a fire is a blessing,” said Sherie Tellinghuisen, co-owner of Hometown Hotel in Willow Lake. “What I think is that all things happen for a reason. I think it really got things going. The spark started a spark.”

Before the fire, the town had had a few rough years: The restaurant had closed. The grocery store had closed for a while and was adjusting under new ownership.

“Everything was getting real quiet,” Tellinghuisen said.

But after the shock of the fire wore off, the community’s outlook changed.

“Everyone just said, ‘Oh, no,’” Tellinghuisen said, in a defiant tone. “‘We’re not just going to go away.’” 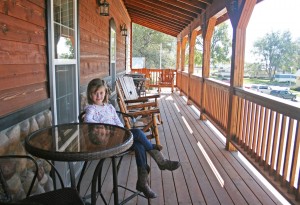 Ella Vandersnick smiles on the balcony of Hometown Hotel in Willow Lake.

The day before the night of the fire, the community had done a controlled burn of an old wooden elevator. A tree caught fire during the process, but they extinguished the flames. Then, overnight, the tree reignited. A branch fell from the burning tree onto a power line; the line shorted out, and sparks flew inside the butcher shop. Flames followed. From there, the fire took down several other businesses on Garfield Street, including Tellinghuisen Construction.

“Wayne said, ‘We’re going to rebuild, and it’s going to be done by next year,’” Vandersnick said.

The following year was already set to be a big one for Willow Lake. The town has an all-school reunion every year—more often than any other school or town in the state—and 2012 was set to be the 100th anniversary of that tradition.

So there was a deadline. But what exactly was going to be built in that spot?

The Tellinghuisens had not planned on going into the hotel business, but that’s what Wayne 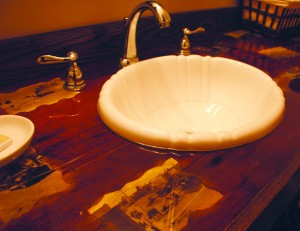 “Wayne was going to build something with a balcony,” Sherie said. “You know anything else that needs a balcony?”

Hometown Hotel has not just a small balcony, but a broad one spanning the breadth of the building. Wooden chairs and patio tables provide space for sipping a lemonade and watching the sunset or the traffic go by—or a parade, which is what happened a year later when the hotel was finished, as promised, for Willow Lake’s celebration of its 100th all-school reunion.

“There had to be a thousand people,” Vandersnick said. “People were up here (on the balcony) watching the parade. It was phenomenal.” 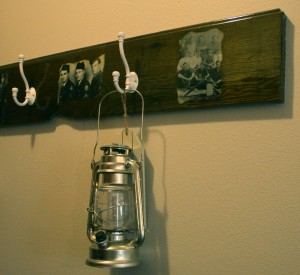 Scenes from Willow Lake’s history are part of the Hometown Hotel’s decor.

The hotel itself is pretty phenomenal: It was built with an eye toward details, from the old-style light fixtures to the stone trim on the lower wall outside. Scenes from Willow Lake’s history can be seen all through the hotel, including on the sinks and the fronts of the in-room refrigerators. It caters to hunters and fishermen with a fish and game cleaning room, but some fishermen who’ve stayed have declared it almost too fancy for them (though they keep coming back).

“When you say little-town hotel, this isn’t what you think of,” Vandersnick said.

Indeed, a small-town hotel wouldn’t have to be so grand. The Tellinghuisens could have done something less, something “good enough.” But apparently doing things up big is Wayne Tellinghuisen’s style.

“That’s just Wayne,” Sherie said. “That’s just the way he is. When he wanted to build a hotel, I said, ‘Well, OK, but let’s not go overboard, OK?’ He kept adding and adding, and I said, ‘Just like always, huh?’”

Hotel construction wasn’t the only thing happening on Garfield Street that year.

“The flurry of activity, after everybody got over the shock of (the fire), was amazing,” Vandersnick said. “The construction, the pace—everybody was pitching in. New sidewalks. New lights on Main Street. New buildings. … It was exciting and scary and awesome all at the same time.”

“All the community helped, chipping in,” said Willow Lake alumnus Cory Bratland, who said he came in on a weekend to offer his cleanup help to the construction crew.

“You see that a lot around here,” he said. “We’re proud of the community.” 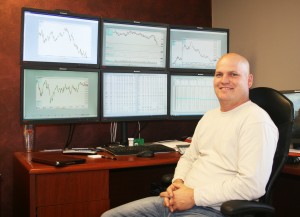 The hotel complex includes several businesses, including Bratland’s: Prairie Ag Marketing. Bratland grew up in a farm family and has found a career working with farmers. He markets grain for farmers in eight different states and Canada—all without leaving Willow Lake.

“With today’s technology, I’m placing orders directly with Chicago right here,” Bratland said. “I don’t need to be in the big cities. I can do everything from the luxury of my home surroundings.”

Which is just as well, since this is where he’d rather be.

“I visit big cities once in a while. It’s not for me,” he said. “People are envious of where I live. I like to hunt and fish.”

Bratland said part of Willow Lake’s new revitalization is based on the community reinvesting in itself, which can draw outsiders (including Willow Lake’s very loyal alumni) to invest in the town also.

If the community looks like it doesn’t care about the future, others are less likely to want to see themselves as part of that future.

“Who wants to open up a business in a rundown building?” Bratland said.

Willow Lake has benefited from community projects such as the store, or the restaurant, which is owned by a small group of investors, where “people can come together, where they all pitched in a little bit” to make a bigger project possible, Bratland said.

In the grocery business

Lake Grocery had struggled for a few years under private ownership until it finally closed in May 2008.

“It was such a big hole in our main street when the grocery store was closed,” Vandersnick said, adding that without the store, the closest groceries were 25 miles away in Clark or DeSmet, or an hour away in Watertown or Huron. “We missed the grocery store terribly. “

The building reverted back to Dacotah Bank’s ownership; it was put up for sale, but there were no takers. In March 2009, the bank deeded the building to the Willow Lake Area Advancement.

“For free! Not even for a dollar,” said Vandersnick, president of the group. 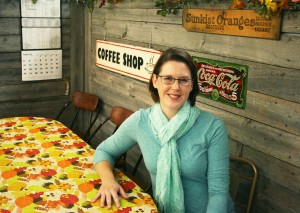 The partition wall in the coffee area of Lake Grocery where Kristin Vandersnick is sitting was built by her husband, Matt. The Vandersnicks started married life in Sioux Falls, but “We always knew we wanted to come back here,” she said. “We wanted to live by grandmas and grandpas and have our kids have this small-town experience.”

There was still plenty of investment needed to get the store in good shape, both in terms of money and sweat. Dozens of community members put in many hours of work to clean the store, take out old carpet, update furnishings and much more.

“We didn’t think we’d be in the grocery business, but it’s working well,” Vandersnick said.

The older people in the community are very loyal shoppers; the advancement group’s challenge is convincing young families to also shop at the store, as their larger purchasing power is what will ensure the store’s success in the community.

Even now, however, the store covers all of its own expenses.

“I really have to compliment the manager and employees—they run this place and take care of it like it’s their own,” Vandersnick said. 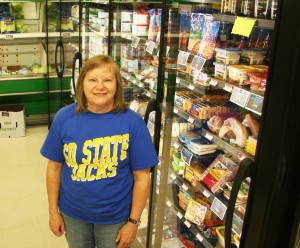 Deb Holmstrom manages Lake Grocery in Willow Lake. “I really like it here,” she said. “Everybody looks out for you.“

The group made the decision to fundraise and invest in new coolers, a significant purchase for a store their size. The new coolers are lit from within with lights on motion sensors.

“Isn’t it beautiful?” Vandersnick asked about the newest cooler. “Hy-Vee, eat your heart out.” 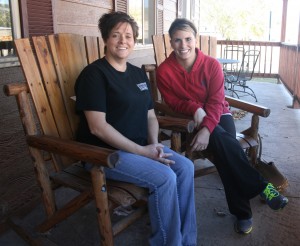 One aspect of the store that helps a bit with the bottom line is a gift shop in the corner. It’s run by sisters-in-law Darcy Pommer and Erica Bratland. Both of them have other jobs—Pommer works for Delta Dental, and Bratland works at the Rusty Nail Restaurant—so the gift shop is something they do on a part-time basis, in part because it’s fun for them.

The gift shop serves as a place for people to shop for gifts, especially for baby showers or weddings. Their wedding registries are popular, Pommer said.

The store doesn’t charge the gift shop rent—their arrangement is commission-based, so it makes sense for them to promote one another. As one does well, so does the other.

“I was a little bit scared (to be farther from conveniences), but it’s a great community,” Pommer said. “There are so many younger people moving into the community. I love it. The day care’s awesome. The school is great. … I’m not worried about kids playing outside.”

A place to gather

The Rusty Nail, where Pommer’s sister-in-law works, is just across the street from Lake Grocery. It was built at about the same time that the whole main street area was under construction.

The old restaurant in town had fallen into some disrepair and eventually closed. A group of investors decided the community needed a place to eat and drink and gather, and they pooled their funds to put up a new building to house a new restaurant and bar. 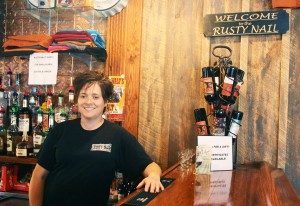 The Rusty Nail restaurant where Erica Bratland works includes the Old West charm that is featured in much of the rest of the town. A lot of the work of building and decorating was done by community volunteers, even if they weren’t investors in the project.

If the town didn’t have an eating place, residents would have to travel 20 or 30 miles to the next closest restaurant, Erica Bratland said.

“This is a gathering place,” she said. “It’s the place where people get together.”

The restaurant is not community-owned, but many community members gave what they could to help the project succeed: of their time to help with the building process, or by getting decorations for the building at cost.

The community seems to have a common vision for what Willow Lake should be: The stonework on the front of the hotel has been repeated on other buildings, and the new sidewalks are stamped to look like boardwalks, carrying through the Old West theme.

“Everybody is doing improvements,” Pommer said. Everyone is doing what they can to “keep our town going.” 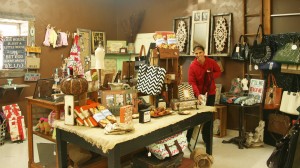 Pommer does some cleaning at the gift shop inside Lake Grocery. 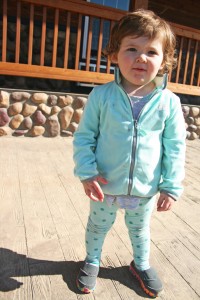 Clair Vandersnick helps to show off the stonework and stamped concrete that are part of Willow Lake’s new look. 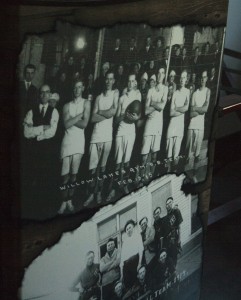 The hotel’s décor is rich in Willow Lake history.