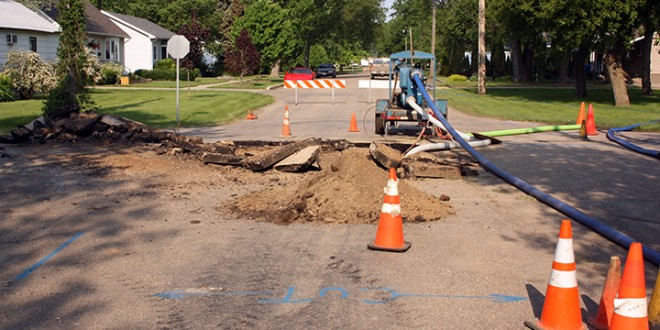 A manhole cave-in in Clark started the process of an overhaul of the sewer piping system. Clark County Courier photo.

Getting drinking water to come into our homes and wastewater to move out, while ensuring the drinking water is drinkable, the wastewater is acceptable for dumping, and all the liquid stays in the pipes—this is the challenge that dominates town council meetings throughout rural America, and certainly in Dakotafire communities.

Many of the water and sewer systems in the Dakotas are at least a century old, built during the growing years in the Dakotas, and they are showing their age.

A lack of maintenance has added to the problems, according to Joe Dvorak, a field manager for Midwest Assistance Program, which provides technical assistance for communities working to make water and sewer improvements.

“A lot of it is the fault of the communities themselves,” said Dvorak, who works in North and South Dakota. “They haven’t kept up to date with the revenues necessary to do the updating and repairs that need to be done, because they try to keep rates low—which is understandable. But the resources available to them have dwindled greatly over the past few years.”

The communities who are trying to deal with the systems are often ill-equipped to do so, Dvorak said, with a significant proportion of residents who are aging along with the water systems.

Where can small towns find the money for water and sewer projects? See an overview of funding sources here.

“The people on these boards, they’re often there because no one else will run. The finance officer and the operator or city maintenance person, they are the only salaried people in town,” he said. “They can’t say on top of this. There’s just no way.”

Dvorak added that many communities are having a difficult time getting certified operators. “The operators they have are getting older and they don’t want to do it anymore, and they can’t find anybody to replace them. That becomes more and more of a compliance problem.”

That’s where the Midwest Assistance Program can help. They provide training for boards and operators, and they also assist with all aspects of putting a water or wastewater project in place, from helping with technical guidance to advising on grant applications to just giving advice on good practices.

Here is one piece of advice Dvorak tries to share with all the communities he works with: “Operate [your] water and wastewater systems as a private business. You can’t operate a business on Main Street, U.S.A., without understanding what the fixed costs are and charging accordingly.”

A number of communities have now adjusted their charging practices so they are better in line with costs—by, for example, increasing rates by the same percentage as the cost of living each year. This leaves communities in a better position to deal with emergency repairs or needed upgrades.

Dvorak said the budget for the Midwest Assistance Program has been cut in half in the past year and a half, so they don’t have the resources to be able to help all the communities that need assistance.

And if these communities don’t get help from Dvorak or someone like him?

“They just kind of muddle through as best they can,” Dvorak said. “Or, worst-case scenario, they don’t do anything. They just sit and wait. Sitting and waiting only means the situation gets worse and the costs get higher.”

What’s Flowing, and What’s Not

Some communities in the Dakotafire region have already completed their water and sewer upgrades; others are still in the thick of things. Here’s a look at water and sewer projects around the region.

Background: Currently Andover has no discharge permit for its 2.5-acre, single cell, bi-level stabilization pond. With additional treatment capabilities, the town’s permit could be reinstated to allow discharges from the facility.

Planned project: Major improvements to wastewater treatment facility: a new two-acre treatment cell next to the current pond, conversion of the existing treatment pond into two cells, constructing a lift station, and cleaning and televising the collection system.

Background: Users in certain parts of town had sewer trouble last year when there was high water and a subsequent investigation found the storm sewer lines on the east side of town were inadequate during significant water events.

Funding sources: Cash on hand. Town board will also seek a state water/sewer grant because the bid came in higher than expected. 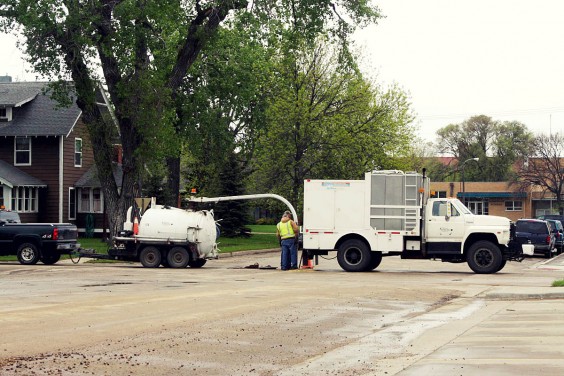 Background: A line rupture and heavy rains in summer 2011 pointed out serious problems in the sewer system. The line that ruptured was clay and had disintegrated; further investigation showed that many connections between sections of old pipe had deteriorated, which was allowing water from the ground to seep into the sewer system and overload it.

“This was observed as a rise in the water level of the sewer lagoon,” said Britton Mayor Dr. David Kleinberg. “That, in addition to the line rupture, brought the magnitude of the problem to our attention.”

Planned project: Repairing sewer lifts and adding a propane power source for them, replacing 60 percent of sewer pipes (40 percent are newer PVC pipe and are in adequate shape yet), installing rip-rap around the sewer lagoons and adding floats to them.

Timeframe: First phase of project, repairing sewer lifts, was to begin in September. More funding may be needed to go on to repairing the lines. 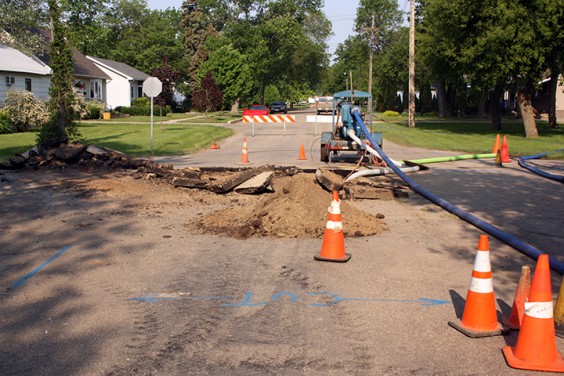 A manhole cave-in in Clark started the process of an overhaul of the sewer piping system. Clark County Courier photo

Background: An intersection caved in in June 2011.

“Our problem is that because of so many sump pumps run through the sewer system, with an antiquated sewer system, the overload on the water treatment plant really puts us in a crisis situation,” said water/sewer superintendent Darin Altfillisch.

Projects: Relining of sewer piping system and manholes and a new water treatment plant. “Now, the inlets entering the main lines seem to be the issues, and we would like to know for sure where these leaks are so we can handle accordingly,” said Clark councilman Terry Binger, who nevertheless is pleased by the results of the relining project. “I guess I would really like to show people what we’re doing and how we’re doing it. They would be amazed.”

Funding sources: A $365,000 loan from USDA Rural Development. The leftover money will likely be shifted to future sewer projects.

Timeframe: The sewer relining project was completed this summer. The water treatment plant is expected to be done in November.

Background: The city just finished a massive water project: a new 125,000 water tower, replacing all water meters, and replacing about 82 blocks of water mains, at a cost of $3.5 million. Now it’s on to the sewer system, which is aging and overloaded.

Planned project: The first phase of the project is inspecting and televising a portion of the collection system, disconnecting storm sewer catch basins from the system, and eliminating sludge build-up in the primary holding pond, according to finance officer Lisa Raethz.

Funding sources: The city has applied for a loan from the Clean Water State Revolving Loan Fund. Sewer rates will increase from $11 to $24 per month to pay for the loan.

Background: The town finished its sewer line renovation project last year, but they still faced problems on another front: The town’s lagoon is located near Logan Lake. A string of wet years has increased the lake’s water levels so much that lake water inundated the lagoon.

Planned project: The town has purchased 17 acres of land for two new lagoon cells. One cell, built in 2000, is still functional and will be part of the new system. A lift station will also be developed to replace the current gravity flow system.

Funding sources: Because the problem is related to flooding, Gackle was able to apply for funding assistance from the Federal Emergency Management Agency.

Background: The city would like to replace a set number of blocks of water, sewer and streets each year, but flooding in recent years has caused sewer main collapses and road deterioration, leaving the city overwhelmed with projects. Residents have been forced to be patient, as not all streets could be redone immediately.

Project: In 2012, the city did street repairs and some sewer repairs. No water repairs were done because the city ran out of funds.

Timeframe: The city hopes to be back to a more normal maintenance schedule and budget after another three years. 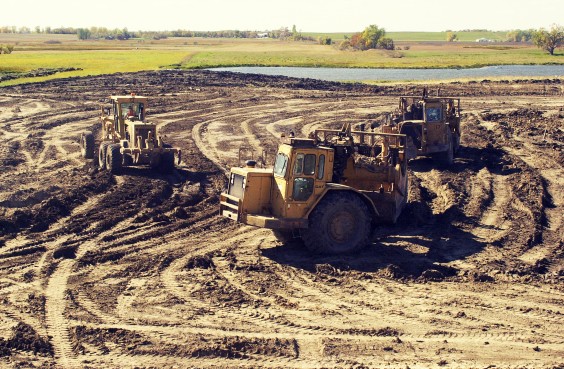 Background: Discharges at Webster’s sanitary sewer treatment plant exceeded storage capacity in 2006, which meant that when the lagoon filled up, discharges went in a stream that eventually flowed into Waubay Lake. According to Department of Environment and Natural Resources rules, they had five years to fix the problem. The root cause was aging sewer lines and residents who put their sump pumps into the sanitary sewer instead of storm drains.

“The problem is all of this water coming in flows,” said water superintendent Adrian Rumpza in 2006. “Normal use per capita at the lagoon is about 180,000 gallons a day, but when there’s a three-inch rain the flow jumps up to 462,000 gallons a day.”

Funding sources: $1,496,000 grant and a $2,156,000 low-interest federal loan from the American Recovery and Reinvestment Act, plus other grants and loans. Rates for sewer customers also increased.